Explore your TRAIL: More than you imagine! 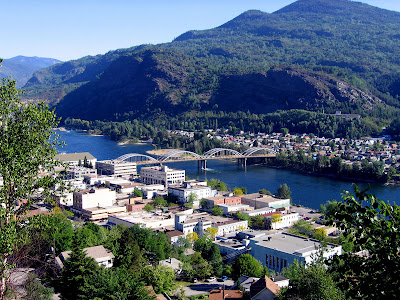 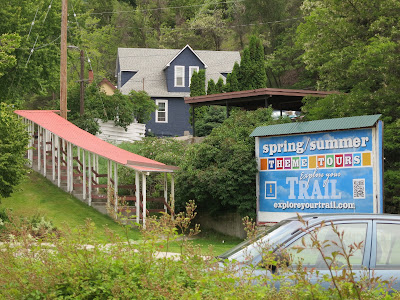 I first came to Trail in 1974 when I was developing senior citizens' housing around the Province with CMHC. But I never had an occasion to come back until this week.  I won't wait 38 years before I come back again! 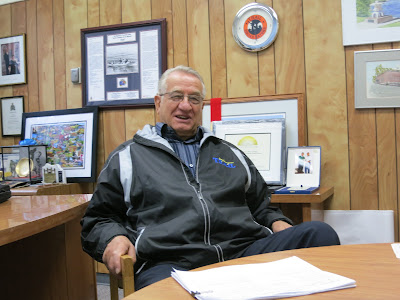 I am here for a few days at the invitation of Mayor Dieter Bogs to whom I was introduced by Mike Martin, the former Manager of Teck Trail Operations, the largest employer in the region. I was introduced to Teck two years ago when the company was seeking advice as to how best contribute to the revitalization of the City's downtown. Now that a new Downtown Plan has been produced, I am here, not as a paid consultant, but as someone with an interest in towns and cities who enjoys sharing lessons learned from around the world. 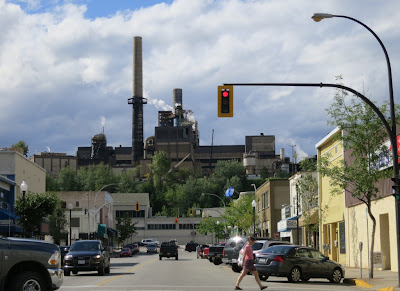 Trail is a very interesting and authentic place. While there is some confusion as to the exact population it's somewhere in the order of 7500. It is called a city, but feels like a small company town, because to a large extent, that is what it is, with the massive 450+ acre Teck operation literally overlooking the city. 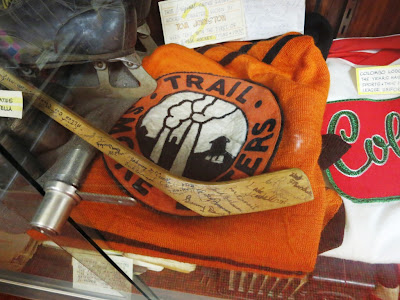 Ask most Canadians what they know about Trail and if they are old enough, they'll mention the Trail Smoke Eaters, who won a World Hockey Championship in 1961. (I'm told that a Smoke Eaters hockey jersey is a 'must have' for any collector of sports memorabilia.) They may also tell you they've been told it has a grey, somewhat polluted industrial landscape.

That's what I assumed too.

Was I ever wrong. I assumed that like many other industrial towns across Canada, there would be an industrial odour hanging over the town. There isn't. Not at all. In fact, when visiting a small downtown Teck Interpretative Centre designed to educate people about the operations, I was struck by a hand written comment on a notice board that said "Thanks for the breath of fresh air!" 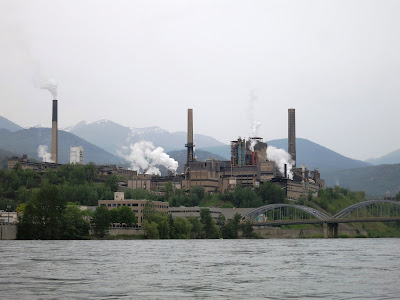 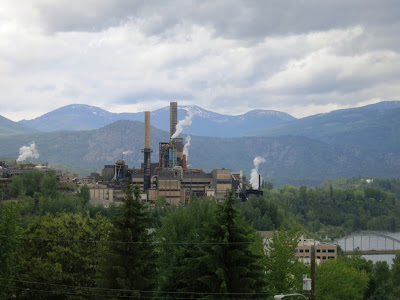 And while there is white stuff billlowing from the many industrial stacks... it is essentially steam, not smoke!  But then again, the Trail Steam Eaters doesn't quite sound the same! 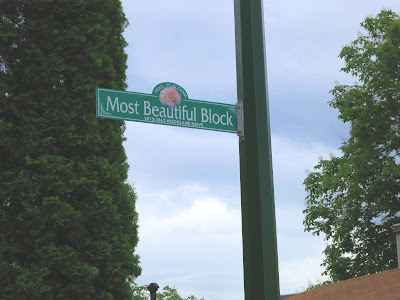 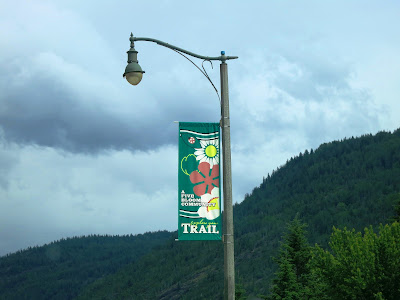 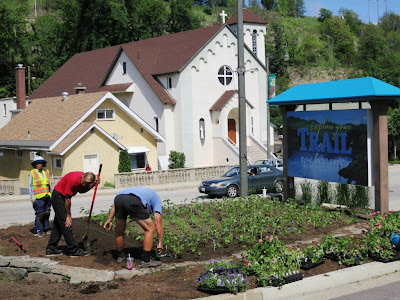 During my first day here I had a number of other surprises. For one thing, the town has successfully participated in the Communities in Bloom competition  http://www.bccommunitiesinbloom.ca/ and is a two time national champion This year, Trail is participating in the international competition and during my tour around the town I was shown many of the works underway in advance of the judge's visit next month. Trail now participates in the program annually, and the impact of the program can be seen all over town.

Outside the hospital, (yes, there's quite a large hospital here) volunteers were planting ornamental flower beds. I was impressed to learn that many of the new hospital facilities and equipment at the hospital have been donated by local companies and individuals. For example, Kootenay Savings, the local Credit Union was the lead sponsor for a new Helipad that was recently completed near the hospital's front door.

Trail's participation in the Communities in Bloom program was the result of a $250,000 in seed money (pun intended!) from Cominco about 10 years ago.  Since then, the program which involves much more than just planting flowers has led to the painting of numerous colourful murals, creation of neigbourhood associations, neighbourhood signage, and other volunteer beautification intiatives. 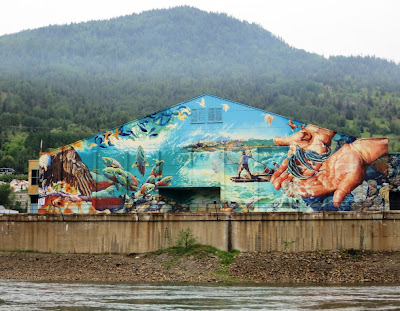 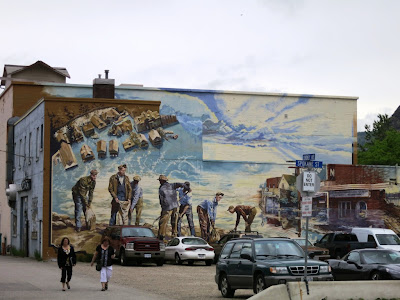 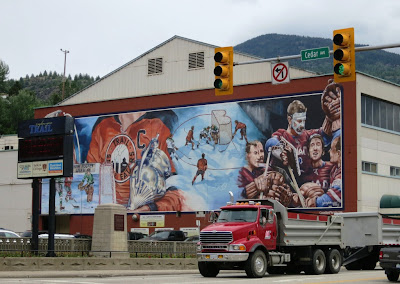 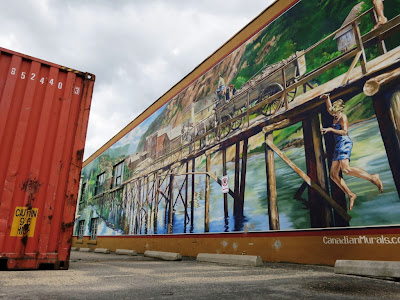 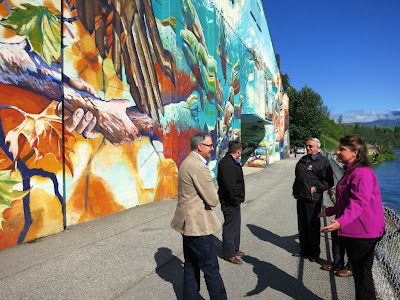 Another surprise was the number of people I met who were born and raised in Trail, but left, only to return. As Steve Lus, the well known CBC Early Edition newscaster tweeted to me, many return because of strong family ties and job opportunities. The strong family ties may be related to the very large Italian-Canadian population in Trail. Indeed, many of the town's prominent 'exports' such as Bruno Freschi and Ken Georgetti have Italian backgrounds. 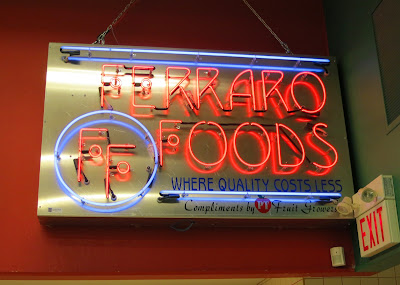 One of the town's more prominent families is the Ferraro family. It runs a beautiful supermarket called Ferraro Foods which felt like an upmarket Italian version of Stong's Foods in Dunbar!  I am told there is another excellent Italian food market and some good Italian restaurants. Tonight I'm off to Colander Restaurant, Frances Bula's favourite spot in town.  Frances agrees with me that Trail has a special quality and yes, authenticity that far too many BC communities have lost. 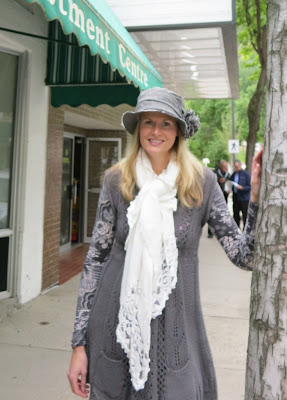 Another surprise was meeting some young urban professionals who have moved to Trail to start up new businesses. One example was a very stylish young lady named Lisa Milne who along with her husband has purchased and beautifully restored the Royal Theatre.  Not only has she installed digital 3-D equipment at a cost that will no doubt take years to recover, but she has arranged for live feeds to the Metropolitan Opera in New York on Saturday mornings and the Bolshoi Ballet. Unbelievable! Does anybody do this in Vancouver? 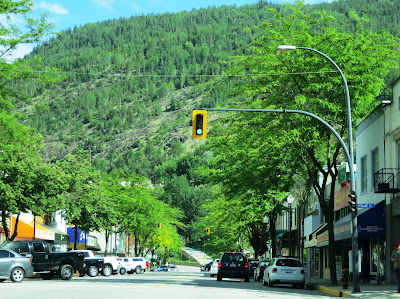 My first day in Trail destroyed a lot of myths...for example, it's much greener than I expected... but I must now head off to my first of many appointments for the day...but suffice it to say, there's much more I want to write about this very special place.
Posted by Michael Geller at 7:57 AM

Thank you for sharing our story. Its rewarding to see what a great impression our area left on you. (I'm one of the natives that returned!)

What a wonderful story you tell of our beautiful city. I'm so happy you enjoyed it so much! I was born here and lived here all my life. Our 4 children were born here as well and although they all live and work elsewhere it is still home and they visit often. Please come and visit again!
Lola Hanlon

And there is so much more!! All the surrounding towns have their own personalities and charms. Check out Rossland. Fruitvale and Montrose. I have a certified organic farm on Columbia gardens road in between Trail and Fruitvale, Earthy Organics. I grew up in Fruitvale, went to big City for about 16 years and settled back in the kootenays. Rural living is beautiful here!

Yes Trail is great I came from the prairies over 50 years ago and though my plan was to stay only a year or two I am still here and have no regrets.
Other than lacking shopping for clothes everything else is perfect. I am so happy
I raised my children here. Grace

Thank you for some other informative site. Where else may just
I get that type of info written in such an ideal way? I've a challenge that I am just now running on, and I've been on the look out for such information.

Delhi Escorts Are Available Right Now Fulfill The Requirement
Choose for yourself only the best female Delhi Escorts to meet all your dirty fantasies. Especially for our clients, we have chosen the most beautiful and talented ladies in Delhi or so many locations. contact us for the escorts in the Delhi location for arranging a booking.
Thanks for sharing such a Great Information with us
Delhi Escorts
Delhi Escorts