Bold Ideas Towards an Affordable City: The Mayor's Task Force on Housing Affordability 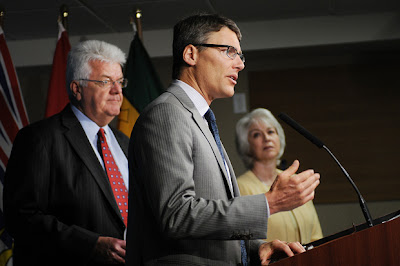 Yesterday the Mayor and Olga Ilich released the interim report on the results of their Task Force. As the Chair of a Roundtable created by the City that looked at the impact of form and design on 'affordability' I was part of the process, although I was not a member of the Task Force per se.

Over the coming days there will be much said about the findings of the Task Force committee and the City Staff who played a role...a very major role I might add... in the drafting of the final report.  I too will be writing more, but in the meanwhile, I would like to share a comment from the enigmatic Glissando Remy that appeared on Frances Bula's Blog, and some follow up comments I offered.

Here’s my solution.
Look at how and what’s been done in Vancouver in the past decade and … Stop-Doing-It!

Well, Glissy makes a good point when it comes to the zoning of land, the determination of Community Amenity Contributions (CAC’s), the application of fire and safety requirements, and the role of some people (not all) in the planning department, the Urban Design Panel, the Development Permit Board and last but by no means least, the Sustainability Group.

That being said, as a contributor to the process, I am encouraged by many of the recommendations, although time will tell how many come to fruition.

There’s much I would add, but as I tried to say to Pete McMartin, one of the greatest benefits that is likely to come out of this exercise is an increased awareness of the importance of ‘affordability’ when it comes to the zoning of land and processing of applications.

My roundtable report determined that in recent years, ‘affordability’ has been trumped by building design/appearance, community aspirations, and sustainability….and sustainability. If you don’t believe me, just take a close look at many of the new social housing projects on City lands around the city.

If affordability for the taxpayer was the key consideration, those buildings would have looked very different. I point this out now because of the emphasis in the report on the City becoming more proactive in the development of social and rental housing on city lands. Let’s hope it will build ordinary buildings, not ‘award winning’ buildings like many of the most recent efforts.

On a related issue, I look forward to seeing a list of the city lands that might be made available to the Housing Authority for future development. I hope it will include the three one acre lots the city owns on Celtic Avenue just east of Blenheim Street. With wonderful views over the Fraser River and surrounding green space, I can’t think of a better opportunity for a low-rise apartment buildings offering affordable rental suites.

Of course there is a bit of a hike up to Marine Drive to get the bus, but it’s a lovely place to cycle…and if we can get bike racks at all bus stops…multi-model transportation could address this shortcoming

Re: your proposed Celtic development, it is odd you don't suggest a modest rerouting of transit to make access easier.