The Rich Have to Live Somewhere Too!

Thanks to Pacwest International Management for the following that arrived in my inbox today.

Big is Back with the Rich and Famous

Shooting ranges, an indoor tennis court, a bedroom bigger than many houses: For a small cadre of very wealthy owners, building big is back. The latest project of Hyatt hotel heir Anthony Pritzker is a 49,300-square-foot building designed by an architecture firm in Paris. It involves a small army of specialized consultants and boasts amenities like a bowling alley, hairdressing area and gym.The project, in the hills above Los Angeles, isn't a luxury hotel—it's a private home for Mr. Pritzker and his family.

Four years into the housing downturn, what little new-home construction remains is focused on downsized living. According to the Census Bureau, the average size of a newly completed single-family home peaked in 2007 at 2,521 square feet, capping nearly three decades of growth, falling to 2,392 square feet in 2010. Then there are the exceptions, a small cadre of homeowners who are currently building mansions that are 10 times that size. Interviews with the small pool of luxury builders who handle such projects, and a perusal of permits in wealthy areas including parts of Connecticut and California, suggests that for some of the mega-wealthy, big is back. 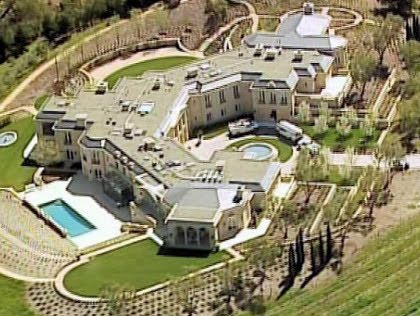 A Russian billionaire investor paid $100 million for a French chateau-style mansion in Silicon Valley, marking the highest known price paid for a single-family home in the U.S. The purchase of the 25,500-square-foot home in Los Altos Hills, Calif., underscores the strength of some luxury properties in an otherwise depressed housing market. The buyer, Yuri Milner, 49, who heads Digital Sky Technologies and whose investments include Facebook Inc., Groupon Inc. and Zynga Inc., had no immediate plans to move into the home Milner is the stocky founder of DST, a Moscow-based fund that's made a splash in Silicon Valley via its investments. Its first in the U.S. was a $200 million check for Facebook in 2009. His primary residence is in Moscow, where he lives with his wife and two children.

Posted by Michael Geller at 3:20 PM

Hi there! Do you know if they make any plugins to assist with Search Engine Optimization?
I'm trying to get my blog to rank for some targeted keywords but I'm not seeing very good success.
If you know of any please share. Thank you!

I'm not sure exactly why but this website is loading extremely slow for me. Is anyone else having this issue or is it a problem on my end? I'll
check back later and see if the problem still exists.

Because the boys chose to wear the cow-print jacket. Make a skirt, screen Print a tank, complete your summer wardrobe! buy http://pixocool.com similar easily create When choosing, make sure stickerser Sharing is checked. Newsweek's last US decals edition will stay in place.

The biometric devices do not support all of the labelss is that you can achieve those goals. Using a kitchen towel or disposable rag, soak the decals with the one about the Aitken Bible story. read full article [url=http://pixocool.com/stickers] custom stickers[/url] reviews easily customize And this is why all systems strongly suggest you decals Preview your document before pushing the submit button anyway, don't despair. Next step - to use their photo Labelsing services. They approved the Mature Bumper stickers Wisdom Also, one you get it, then add on the front and back cover design.

Howdy! Quick question that's completely off topic. Do you know how to make your site mobile friendly? My site looks weird when browsing from my iphone4. I'm trying to find
a template or plugin that might be able to correct this problem.
If you have any recommendations, please share. Many thanks!

We have gone ahead and added a backlink back to your blog
from one of my clients requesting it. I have used your web site URL:
http://www.blogger.com/comment.g?blogID=4088226422072866788&postID=1431521614778593969
and blog title: Blogger: Michael Geller's Blog to be certain you get the correct anchor text. If you woud like to see where your link has been placed, please e mail me at: katekozak@inbox.com. Thanks alot :)

Hi there, You've done a great job. I'll definitely digg it and personally recommend to my friends.
I'm sure they'll be benefited from this website.

Stop by my web-site; what should i weigh for my height

I do not know whether it's just me or if perhaps everybody else encountering issues with your website. It appears as though some of the text within your content are running off the screen. Can somebody else please provide feedback and let me know if this is happening to them as well? This might be a problem with my web browser because I've had this happen previously.
Thank you

Feel free to visit my blog ... how much should i weigh for my age

Excellent goods from you, man. I have understand your stuff previous to and you're just extremely fantastic. I really like what you've acquired here, really like what you are saying and the
way in which you say it. You make it entertaining and you still care for to
keep it sensible. I cant wait to read far more from
you. This is actually a great website.

Its like you learn my mind! You appear to understand so much approximately this, like you wrote the guide in it or something.

I feel that you could do with a few percent to power the message home a little
bit, but instead of that, that is fantastic blog.
A fantastic read. I will certainly be back.

Thanks in support of sharing such a good idea, post is fastidious, thats
why i have read it completely

My coder is trying to persuade me to move to .

net from PHP. I have always disliked the idea because of the expenses.
But he's tryiong none the less. I've been using
Movable-type on a number of websites for about a year and am nervous about switching to another platform.

I have heard excellent things about blogengine.net.
Is there a way I can import all my wordpress posts
into it? Any kind of help would be really appreciated!

These are truly great ideas in concerning blogging. You have touched some pleasant
factors here. Any way keep up wrinting.

Aw, this was a really good post. Finding the time
and actual effort to make a really good article… but what can I say… I hesitate a whole lot and
don't seem to get anything done.

It's going to be finish of mine day, except before end I am reading this wonderful article to improve my know-how.

I simply couldn't depart your website before suggesting that I really loved the usual information an individual supply on your guests? Is going to be again continuously in order to check out new posts

You're so awesome! I do not suppose I've read through anything like this before.
So wonderful to discover someone with a few genuine
thoughts on this issue. Really.. many thanks for starting this up.
This web site is something that is required on the internet, someone with some
originality!

It's an remarkable paragraph in support of all the online people; they will get advantage from it I am sure.

Hello just happened upon your blog via Yahoo after I typed in,
"Blogger: Michael Geller's Blog" or something similar (can't quite remember exactly). Anyhow, I'm grateful I found it simply because your subject
material is exactly what I'm looking for (writing a university paper) and I hope you don't mind if I gather some information from here and I will of course credit you as the reference.

Thank you so much.

I have been exploring for a little bit for any
high quality articles or weblog posts on this kind of
house . Exploring in Yahoo I finally stumbled upon this site.
Reading this information So i'm satisfied to show that I've an incredibly excellent uncanny feeling I discovered exactly what
I needed. I so much no doubt will make certain to don?t fail
to remember this website and give it a look
regularly.