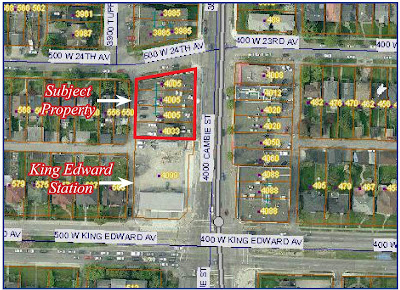 Anyone driving along Cambie Street between King Edward and West 57th, or reading the Real Estate Weekly, cannot help but notice that many of the single family properties along both sides of the street are for sale, or have been sold. According to newspapers, and recent CBC Early Edition reports, single family lots worth $1.2 million have sold for $3.4 million. This has included one ten lot assembly.

Experienced Vancouver developers have watched the situation with a mixture of amusement and surprise. They know that it is a mistake for anyone to buy a Vancouver property based on its potential rezoned value, since the City of Vancouver has a policy of charging a Community Amenity Contribution (CAC) whenever a property is rezoned. In other words, anyone paying $3.4 for a $1.2 million property may also have to pay another million to a million and a half dollars to the city as an amenity contribution.

I do not entirely object to this approach. I think it is reasonable for new development to make a contribution to offset the cost of providing additional amenities. What I do object to, however, is the manner in which the CAC is calculated, and in some instances, the amount of the CAC. The current system creates great confusion and uncertainty which is starting to stifle the type of redevelopment many of us want to see.

A couple of people have told me they don't really understand my concerns, and what I am proposing with respect to the determination of Community Amenity Contributions. In case you too are confused, here's a brief synopsis:

1. As discussed on CBC this morning, the city's current approach appears to be a negotiated CAC payment that takes into account the value of the land before rezoning, and the value of land after rezoning. The city's goal is to receive approximately 75% of the land 'lift' in cash or amenities. Sometimes the values are determined based on Purchase and Sale Agreements; sometimes they are based on appraisals; and sometimes they are negotiated with the City's real estate department

2. One of the drawbacks with this approach is that in some instances the city might not receive any CAC payment if it is determined there is not any increase in value upon rezoning. This was the case with the Lanesborough development in the 3000/3100 block of West 41st, where I did not pay any CAC's since the city's real estate department deemed I had paid too much for the land. In fact, my arrangement with the vendors was to pay them the rezoned value.

3. I am NOT advocating that we return to an approach based on Purchase and Sale Agreements. Nor am I advocating that we retain the current system which determines value using different approaches. On the contrary, I am advocating that the CAC be a pre-established amount on a square foot basis, (that is more reflective of the cost of providing services, not increase in land value) that is published and clearly understood by purchasers and sellers. I understand that this approach is currently in place around SEFC and other parts of the city. I think it is preferable since it creates more certainty, noting it is oftentimes very difficult to assess the rezoned value of a piece of property, years in advance of any development, or when the project is innovative and untested. This certainly was the case with my recent development known as Hollyburn Mews in West Vancouver.

4. Whether the CAC is paid in cash, or provided in amenities within the development is something that the city can negotiate with the developer. However, the value of the benefit will be predetermined

5. In establishing the CAC rate, the city will have to give regard to a number of considerations including: the cost of providing additional amenities; what is reasonable given the desired density, form of development and affordability; and finally, the value of the land under its current zoning. This latter point is important since if the residual value of the land for multi-family (after paying the CAC) is lower than for single family development, the desired redevelopment will not occur.

6. By way of example, the city might desire a CAC for the Cambie Corridor at $50 per square foot. However, if this results in a residual land value that is lower than the value as a single family lot, most owners will not bother with a rezoning. If it is $20 per square foot, then rezonings may be more likely. The challenge is to come up with a CAC rate that is sufficient to partially cover the cost of new amenities, but not so high as to deter rezoning and redevelopment

As the city seeks to encourage the transformation of single family lots to various forms of higher density multi-family development, it will be necessary to remove some of the uncertainties related to CAC's. I believe fixed CAC's, along with new forms of 'pre-zoning' are the way to go. This will hopefully help avoid the confusion and misunderstanding that has resulted in some people paying millions of dollars too much for the Cambie Street properties, which could well affect the timing and success of future redevelopment.
Posted by michael geller at 10:47 AM

Keep up the great work here. This is important stuff for discussion over the next 3 weeks and we need good understanding of CAC and other such items.

But in the case where lower density lots are highest and best use when the City desires higher density (say there's a real estate boom and developers/wealthy residents are building mansions close to rapid transit), there is something that could be done with property tax surcharges to encourage redevelopment -- if a property is developed into a less-desirable structure type based on long-term use planning the City could come with property tax surcharge to compensate the City and its residents for non-ideal land usage. If it's prohibitive enough the "highest and best", given future higher property tax outlays for low density, takes care of itself.

Michael, I agree with you that new development must cover it's costs to the public. Philosophically, increased density should also contribute to increased amenity and livability.

However, the pendulum has swung too far, and unregulated CAC's now outstrip Development Cost Levys and other fees (the COV has to track and justify these fees annually -not the case with CACs).

I think the CACs are inflating land prices, negatively impacting housing affordability for the next purchaser of a new condo, and frustrating the supply of land for redevelopment.

The City needs to do a much much better job of informing the public on CACs (it's a surprise to most lay people that the City is going to take 75% of "their" rezoned property value).

And what is the logic of 75% lift extraction? Not long ago, a CAC was in law "freely offered, freely received". Now it is an arbitrary figure, dictated by the City which has absolute control of land use decisions with no process for appeals.

Who really "earns" the lift? Does the City earn it with the stroke of a pen? Without a developer taking multiple financial and liability risks to deliver new housing, there is NO land lift.

Also, the City calculates the lift based on a residual calculation that "gives" the developer a "reasonable" profit. What is "reasonable"? The current Director of Planning recently stated publicly that a 15% return on cost was reasonable ... but is it really? If a project takes 3 years to complete, that return is really closer to 5% p.a. which is NOT commensurate with the risk inherent in this industry. Projects with more risk (market, environment, construction etc) should earn HIGHER returns to compensate for higher risk. 15% is low, and arbitrary.

The development industry employs one of every 8 people in the region. If you run your development business on marginal profit targets, you'll eventually go bankrupt, taking others down with you and leaving a wake of unemployment.

What gets me is that the City is frankly a party to the land transaction, but they are not at the table. If Vancouver wants the Cambie corridor to evolve to take advantage of new orders of transit access, they need to give developers and vendors certainty.

Front line staff have represented that there was going to be a public document that would inform property owners of the CAC policy, it's logic and calculation etc. The message that I got was that a document had been ready for some time, but the City Manager has supressed it. Why?