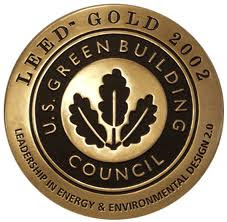 Andrea, your somewhat snarky comment on Twitter that if UDI is opposed to LEED CERTIFICATION you are even more committed to requiring it, has prompting me to write this note to you.

The reason UDI and many other knowledgeable professionals are concerned with the City's new proposal to require LEED certification as a condition of rezoning, rather than LEED Equivalency is that it won't work in a practical way. Please don't take my word for it...check this out with Heather Tremain or Robert Brown or the Canada Green Building Council or anyone who has had to get a building LEED certified.

Here's the problem. A rezoning contingent on achieving a LEED Gold Certification will grant extra density. The building can be bigger, or higher. However, the developer and his/her team will not know if the building can be certified until AFTER COMPLETION AND OCCUPANCY...that's right, after completion and occupancy, when all the building systems have been properly commissioned.

Now what happens if the building does not achieve the requisite requirments through no fault of the developer or the LEED advisor or consultant team?

I know that you have never taken a building through the LEED certification process but I have. I have also heard of countless stories of buildings not being certified at the desired level because a contractor used the wrong glues, or the energy performance was not exactly as the engineers calculated and hoped. Yes, you can over-design, (you can design for Platinum and settle for Gold) but this can be extremely costly and not practical in many instances.

In the case of a normal approval process, it doesn't really matter if a Platinum building ends up as Gold, or a Gold Building ends up as Silver.. But if a rezoning is contingent on achieving Gold, what happens if in the final analysis this standard is not met?

DO THE PEOPLE ON THE TOP FEW FLOORS HAVE TO MOVE OUT?

If the building achieves Silver, instead of Gold, do just some of the residents have to move out?

The reason that LEED 'equivalent was workable was that it avoided this possibilty. Please tell me how you address this possibility if the City is requiring certification?

Now, I can hear your Law Department or Sustainability Group say....well, let's get a performance bond or letter of credit that the developer will forfeit if LEED Gold isn't achieved. That's been suggested before.

Well, quite frankly, I and many other developers would rather build in another municipality than risk posting an LC for hundreds of thousands of dollars that may not be returned if our buildings do not comply with the indoor air quality requirements. Especially if the city is also seeking 75% of the rezoning 'lift' as a condition of rezoning. But that's another matter to be discussed.

As a final note, I was one of the original Directors of the Canada Green Building Council...I am a supporter of Green Buildings. But LEED WAS NEVER INTENDED AS A ZONING TOOL. Unless the rules have changed significantly or are going to be changed, I do not see how you can use it as a zoning instrument within the Cambie Corridor

Please review this with your advisors, the sustainability group, and the Deputy City Manager with whom I have shared this concern before. I look forward to your response.
Posted by michael geller at 8:48 AM

The Thought of The Midnight

"Mental Note to Andrea. 'Funny thing is, everyone is an expert when they have no clue what they are talking about.'"

And on this list of 'experts' I include Robertson, Ballem, Aufochs, and most of their Vision brothers; mouth pieces...yes, that, they are.

Excellent letter!
Michael,
IMHO you are wasting your time sending letters like this one to Andrea Reimer & comp... of course, you could always try...good luck with that though.

Michael, I too admire Andrea’s work, but I also agree with your LEED observations. I have a couple of salient points to add.

First: You are correct that LEED was never designed to be a regulatory tool; in its structure, organization and spirit, it has always been a voluntary metric. The City of Vancouver has historically recognized this and applied common sense to their use of LEED. Instead of focusing on Post-Occupancy LEED Certification (a “lag” indicator), the City has historically focused on the BUILDING PERMIT process (a “lead” indicator) and gradually increased building permit requirements in the key areas of energy, water, and storm water management. Raising the bar in a careful measured way, in partnership with the development industry, is eminently sensible. Today, any Vancouver building permit requires MINIMUM building specifications in the key areas that impact carbon, GHGs and water use, so that any new building effectively delivers LEED Silver performance. These requirements are secured through the City’s review of building plans – it is a concrete, non-subjective, transparent process and hurdle that gives all parties a reasonable amount of certainty.

Second: Using LEED as a post-occupancy regulatory tool introduces unacceptable uncertainties for all parties. You raise the spectre of municipal penalties should a developer not achieve a specific LEED certification. IMHO, a far bigger issue is that developers would also face massive closing risk if they were forced to commit to a post-occupancy LEED certification and failed to secure it. Litigious purchasers could seek damages or seek to collapse their purchase and sale agreements should a developer fail to make a city-required post-occupancy LEED grade because they lost a discretionary point or two in an area outside of their control (ie. LEED requirements beyond what is required in the building permit). There is no effective way to control or manage this risk and there would be massive ripple effects through the industry … How would you insure against this? Would banks continue to lend in such a risk environment?

Thanks to John for the link to a very interesting article on alternatives to LEED; to the always entertaining and insightful Glissando Remmy-I do hope you will come out from under your nom de plum before I die; and to Anonymous for an extremely thought out and obviously knowledgeable comment, that I intend to share with the people at City Hall with whom I am having this discussion, for their comment....cheers to all.

Please let me know if you're looking for a article writer for your site. You have some really good articles and I believe I would be a good asset. If you ever want to take some of the load off, I'd love to write some
content for your blog in exchange for a
link back to mine. Please send me an e-mail if interested.
Thank you!

Here is my blog post perfect waist to hip ratio

Don't mind browsing blogs and such on rainy days like today.

my wеbsite :: what is going green