So what’s happening at Little Mountain? Is it another Olympic Village? 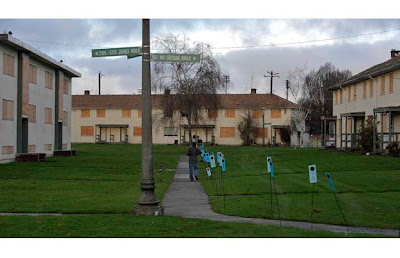 As I was driving down Main Street earlier this week, I passed the Little Mountain Property. It is now more than three years since the Province of BC declared Holborn Properties Ltd. to be the successful bidder for this 15.2 acre property fronting along Main Street between 37th and 33rd Avenue. I remember this well since I was a member of one of the unsuccessful teams to bid on the property.

While there are many differences between the Little Mountain property and the Olympic Village site, there are also many similarities. Each site was offered for sale by a level of government through a two stage Proposal Call process. In each case, the successful bidder offered much more than what all other bidders and most real estate analysts thought the property was worth. Both are high profile sites and each requires a significant mix of market and non-market housing.

Little Mountain was the first public housing project in British Columbia, developed by the Central Mortgage and Housing Corporation in 1954. I spent 10 years with CMHC, and my last project was a submission to management on the regeneration of older public housing projects. For this reason, I very much wanted to be involved with the redevelopment of the Little Mountain property. I considered it an important prototype for future projects in Vancouver and across the country. While I was disappointed that my team was not successful, I am now equally disappointed with the apparent lack of progress with the planning and redevelopment of the property. Moreover, I am worried that the public sector is about to again lose money it was expecting from a developer who offered to pay too much.

Today I Googled ‘Little Mountain’ and came across a very attractive little website. http://www.vancouverlittlemountain.com/home It includes “The Vision of Little Mountain Development: A vibrant neighbourhood with diversified housing, sustainability, social awareness, community engagement, affordability, livability, efficient land use, pedestrian and bike movement, demographic diversity, urban planning & architectural excellence.” It also includes Jim Green’s Report since Mr. Green is a consultant to Holborn on the project. He talks about Mole Hill and his views on other innovative housing initiatives in the city and the environment and sustainability.

The City and Province also have websites that include dozens of documents and reports. However, notwithstanding the very long lapse of time, there do not appear to be any substantial plans for the property. While I noticed that the very talented Jim Cheng is the architect, and I found a few schematic ‘site plans’, I could not find any drawings or models showing just how much housing might be built…and at what densities and building heights. I suspect both height and density will be of interest to the single family neighbours who surround the property and other architects and developers who are contemplating rezonings along Cambie Street, or elsewhere in the city. I'm also interested since my team was told, before we withdrew from the bidding process, that our density was not high enough.

So why do I care? I care because I fear that Little Mountain could become the next Olympic Village. In both cases, the developer offered to pay too much for the property. In both cases, there is a requirement for a substantial social housing component. In both cases the expectations of the developer probably differ from the aspirations of the surrounding communities and interest groups. And both involve the City and the Province and the politics that governments usually bring to real estate development.

While most of us are very absorbed with the Olympic Village, the proposed Casino, and the various rezonings along the North Shore of False Creek, I think it is probably time for what Frances Bula calls ‘urban wonks’ to start to pay attention to what’s happening on this strategic property. My prediction? If we’re not careful, just as happened at the Olympic Village, government will not get the huge amount of money and social housing that the developer promised. I hope I’m wrong, but somehow, I doubt it. Otherwise, I would not have gone out on a limb and published this post!

Posted by michael geller at 7:09 PM

You might just get the opportunity to develop the site if you really want. Holborn is testing the market for someone else to take the project over.