I was saddened to hear yesterday about the major earthquake in Christchurch. The news was all the more troubling since I have been there, and know what a wonderful city it is. Below is a reprint of a blog posting from four years ago when Sally and I were there during our around the world trip. 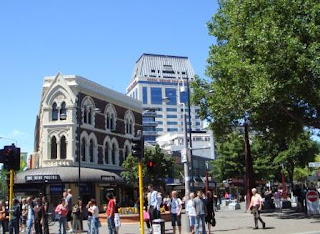 Once again, we were spoilt by a New Zealand hotel. This time, we were given a two storey, two bedroom penthouse suite on the top floor of the Grand Chancellor, Christchurch’s tallest hotel. We immediately set off to find some new friends, so we could have a party!
Christchurch, like Wellington, has a wonderful feel about it. With a population of just under 400,000, it is New Zealand’s second city, after Auckland. It’s a planned city, (Adelaide in Australia is based on the same plan sent over from England), with extensive parks and gardens. The city has a very English character 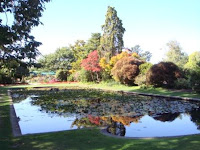 , with punting along the river, and many gothic style buildings, including the Cathedral. Interestingly, the university was relocated from its historic downtown location, to the outskirts, and the former campus has now been converted into a cultural precinct. (Quite the opposite of what has been happening in Vancouver, where SFU is converting heritage downtown buildings into a university.)

Trams were used in Christchurch from the early 20th

century until the 50’s. Today, restored trams transport tourists on a 2.5 km inner city loop to various landmarks around the downtown. (Perhaps this is what inspired Dave Rudberg to propose a similar system for Vancouver). The tram stops at one of the most interesting streets I have ever seen. It is symetrical. That is to say, the buildings along one side have been matched on the other, although some have changed over time.

I was also impressed with the Art Gallery, which is located at one of the stops, and cost only $40 million, just a few years ago. The main stop is Cathedral Square, which is surrounded by heritage buildings, and connected to a pedestrian mall which feels a lot like Granville Mall. (It seems like there are the same black dressed, dirty, pierced, and tattooed kids, who move around the world from mall to mall.)

One place which did feel very different was the Antarctic. Well, the Antarctica exhibit, located near the airport. Since it was twice voted New Zealand’s best tourist attraction, we decided we ought to go. And we’re glad we did. Although, after experiencing the -24 degree snowstorm, I now feel a cold coming on! 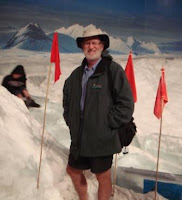 storm, you walk into a room, where a flashing light lets you know how many minutes until the next snow storm. You put on a large parka, and rubber overshoes, (so as not to dirty the snow), and enter a special chamber and wait. Sure enough, the carefully placed warning flags start blowing, and the next thing you know, the wind is howling, and there are blasts of cold air. And I’m wearing shorts! After the snow storm, there are visits to a penguin colony, and various other interactive exhibits. Having gone through the centre, we now feel we know much more about Antartica, than we do about our own Arctic.

We finished off our visit with a ride up the Gondola, which reminded us of Grouse Mountain. From there we could see the Alps, and Akaroa, a French settlement, and our next destination. Speaking of Alps, I must confess that before coming here, I wasn’t aware that skiing is so popular in New Zealand. In fact, there are numerous resorts in the South Island, and the sport appeals to many New Zealanders, when they are not tramping, surfing, bungee jumping, or cycling around the country.

I heard this morning that many of the historic buildings have been destroyed...the Cathedral Spire has fallen down, and at least 65 people have been killed. Interestingly, when we were in Auckland we participated in an exhibit in the museum which was designed to educate people about the effects of an earthquake. It was very realistic, and something that I thought we should recreate in Vancouver. After all, a big quake is going to happen here too. It's just a matter of time. My thoughts are with all the lovely people we met there, and the rest of the people who are today digging out.
Posted by michael geller at 6:37 AM