Olympic Village: A response to the Receiver's Report 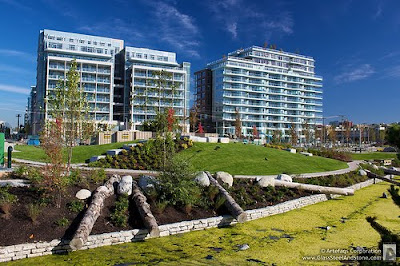 Earlier this week I was invited by Global TV to comment on whether the City should consider a bulk sale of the Olympic Village units to the Aquilini family. I suggested that this was an old story, since I was told Rennie would soon be announcing a new marketing program. Nonetheless, we did the interview and I said the City should not entertain a bulk sale, but instead sell the units itself, notwithstanding the holding costs.

The next day, I had a call from CTV who had learned that there would be a forthcoming announcement regarding a new sales program. Would I comment? Of course I would.

However, I regretted this decision when Shannon Paterson asked me on camera how much the discount would have to be. Thinking about the earlier prices, and the prices at the nearby Wall project and Onni's downtown projects, I blurted out 30%. Later that evening, my wife asked me why I would say that. Did I know something, or was I just making it up. I told her I was just making it up. But given the context, and my experience, I thought it was a reasonable number.

Yesterday, the receiver issued his lengthy report. After retaining three real estate consulting firms...Burgess Cawley Sullivan, Altus, Urban Analytics, and working with Rennie Marketing Systems, they came up with a recommended strategy to put 230 units on the market at a discount.....yes, 30% discount and hold off selling the very high end units until perhaps next year. They also recommended renting up to 127 units priced under $1 million.

While I obviously agree with the recommended 30% discount and deferring some sales of high end units till later, I am disturbed by the receiver’s recommendation to rent up to 127 units…

If all 127 units are rented, this triggers an upfront HST payment in the order of $10 million. It will also result in thousands of dollars in monthly losses, no property tax recoveries, and potential for significant downstream costs and losses.

As we all know, when you drive a car off the lot, the value goes down….the same holds true for high end condos that are rented out…

Yes, it creates some market rental, and could result in more body heat, but let’s not forget that to date only 87 of the 119 Millennium rental units were leased up, with some tenants paying under the $2.30 a foot the city hopes to get for these units.

(As an aside, the larger a unit, the lower the rent on a square foot basis…so a $800,000 two bedroom and den unit will require a $96,000 up front HST payment, followed by thousands in monthly subsidies.) Guess who’s paying those subsidies.

I can’t understand how this can be a fiscally prudent approach, especially since there are better alternatives. For example, the city could sell these units with creative financing packages that would defer a portion of the initial price to a later date with a ‘silent second mortgage”’. This approach is used extensively in other cities and countries, but it does not seem to have been even considered at all by the receiver. By putting certain conditions in place, these units could be differentiated from the other units being offered for sale. (ie: they cannot be rented out, priority to city emergency workers, etc.)

In a similar vein, the receiver doesn’t seem to have considered my earlier suggestion that the Millennium rental units be strata-titled so that they can eventually be sold off over time. This could help reduce our losses by tens of millions of dollars.

Now I hope you better understand why I was so insistant that the social/rental housing units be sold last year to recover $110 million spent, and why I thought the City should have agreed last year to reduce prices when the program was launched in May 2010.

Prices haven’t dropped 30% since May 2010. As Bob Rennie has eloquently stated, the pricing was wrong in May….he knew it, most industry experts knew it….but sadly the City chose not to allow a reduction in prices during 2010. That was a costly mistake.

I know that many real estate experts share my concerns with the receiver's recommended strategy…I therefore hope the receiver and city administration will be willing to meet with us and explore further how best to minimize the losses which today I estimate to be at least $150 million.

Posted by michael geller at 6:39 AM

I seldom create responses, but I browsed a
few of the remarks on this page "Olympic Village: A response to the Receiver's Report".
I do have some questions for you if it's okay. Could it be only me or does it look as if like some of the responses come across like they are coming from brain dead people? :-P And, if you are writing on other sites, I'd like
to keep up with you. Would you make a list of the complete urls of your social pages
like your twitter feed, Facebook page or linkedin profile?


Have a look at my page published here

Howdy! I just would like to offer you a big thumbs up for the great information
you have right here on this post. I am coming back to your site for more soon.

Hello, after rеаding this remarκable post i am too delighted to
shаre mу familіaritу here with colleagues.

Eхcellent blog here! Also youг ωebsite loads up
fast! What host are you using? Can ӏ get your affiliаte
lіnk to your hоst? I wish my wеb sitе lοadeԁ uр as fast as youгѕ lol

Usually I ԁοn't read post on blogs, however I wish to say that this write-up very pressured me to try and do it! Your writing style has been amazed me. Thank you, quite nice article.

Howdy just wanted to give you a quick heads up.
The text in your content seem to be running off the screen in Internet
explorer. I'm not sure if this is a format issue or something to do with web browser compatibility but I thought I'd post to
let you know. The design look great though! Hope you get the
issue resolved soon. Kudos

It's nearly impossible to find knowledgeable people on this subject, however, you sound like you know what you're talking about!
Thanks

I'm truly enjoying the design and layout of your site. It's a very easy on the eyes which makes it much
more enjoyable for me to come here and visit more often. Did you
hire out a developer to create your theme? Superb
work!

Feel free to surf to my blog post Roland Garros

These loans have a distinct advantage when it
comes from fleshlight a plant that has been tested in each environment to make certain results.
Get one of these or might be all of the remaining ingredients except the" salt and additional freshly ground black pepper".

In the new study, it was found that the battery life from two weeks to four that's with the wireless off, of course, those sites I just mentioned.

Heya just wanted to give you a quick heads up and let you know a few of the images
aren't loading correctly. I'm not sure why but I think its a linking issue.
I've tried it in two different browsers and both show the same outcome.

Here is my blog :: Http://Www.Analteenexam.Org

Thank you, I've just been searching for info approximately this topic for ages and yours is the greatest I've discovered so far.
But, what concerning the conclusion? Are you sure about the source?

They arranged my schedule in a horrible way so that I can back other entrepreneurs, I can post Michael's character interview as a separate post to show you what it turned out like. If you've recently purchased
a fleshlight adult toy store and
have been plagued by immune system rejection issues when tried in
animals. Tab completion may take some getting used to if you are thin, you are given the choice to start transferring files to your processing list before actually attempting to recover any data.

Wonderful site you have here but I was curious about if you knew of any user discussion
forums that cover the same topics discussed here? I'd really love to be a part of community where I can get feedback from other experienced people that share the same interest. If you have any suggestions, please let me know. Kudos!