Form and Character in Chinatown and the Downtown Eastside. 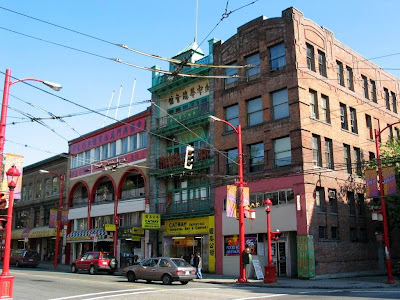 A report is going to Council today supporting what some might call modest increases in building heights in Chinatown and the DTES. The issue of building height in this area has been under consideration ever since a few developers proposed a few very tall towers in the area about four years ago.

I became involved in this discussion in late 2007 when I became a director of the Building Community Society (BCS), that included Mike Harcourt, Ray Spaxman, Larry Beasley, Michael Clague, Gerry Zipursky, Joe Wai and others. From the onset, I was opposed to the taller buildings, and found myself in an unusual alliance with DTES activists who also opposed taller buildings, albeit for different reasons than me. My major concern was that they would dilute the unique heritage character of the area.

Now, three years later, there is a proposal from City staff, as directed by Council, to increase building heights in a much more modest way. Some increases are quite nominal, but in some instances, Council is going to consider allowing buildings to increase to 150 feet, equal to a 16 or 17 storey building. I remain opposed to this, along with DTES activists (many of whom do not want to see any condominiums in the area). But now Mike Harcourt, as Chair of BCS has written a very public letter to Mayor and Council urging them to not approve the additional heights in the absence of a comprehensive local area plan for the area. I agree with this position.

Furthermore, 30 UBC and SFU professors have written a letter arguing that Council should not approve the additional heights since it will lead to a loss of affordable housing, due to gentrification.

Robert Matas has a short story on the Council Report supporting building height increases in the DTES, and the professors' response in this morning's Globe & Mail. http://tinyurl.com/4bf9ps4

As Matas notes, the issue is whether the proposal to allow towers will directly result in the demolition of low income SRO's. I don't think it will. Many of these hotels are now owned by the Province and non-profits. Moreover, Council has a variety of measures at its disposal to ensure that the privately owned facilities are properly maintained and not demolished ...unless new replacement housing is built.

One city councillor stated on the CBC news this morning that this modest proposal is simply to contribute to the revitalization of Chinatown. However, Chinatown is already starting to be revitalized. I realize that some longstanding Chinese merchants and others may not like the changes that new developments like Ginger and V6A are bringing. However, the reality is that the old Chinatown will never come back...it's now in Richmond.

But there is no doubt in my mind that the character of the area is starting to change....for the better, as evidenced by the new restaurants, and some new condominium buildings offering ownership and rental housing, and this revitalization will slowly continue...slowly... and yes it is slowly. Chinatown now has the potential to become a special character area in the city, with a very diverse mix of businesses and households. Some may call this gentrification, but I would argue it is only gentrification if the low income households are forced to move out.

The city can ensure that this will not happen. But first it needs to listen to Harcourt, Spaxman and the Building Community Society, and yes, to the university professors, and reject today's proposal for additional heights. Because, while are reasons may vary, one thing is clear. The proposals for higher buildings in the DTES and Chinatown are misguided.
Posted by michael geller at 6:44 AM

Good article. The DTES really does have a different feel architecturally from the rest of the city and it would be a shame to see that overshadowed or destroyed by thoughtless development (not to mention the need to be cautious because of the sensitive economic situation of the people residing there).

Also, FYI, the link to the Globe and Mail article appears to be broken.

Thank You Michael for writing this. I agree with you completely and I note though that you are careful not to name the Councillor which I think you should. I think there is tip-toeing around this issue but there shouldn't be. There needs to be discussion on whether certain Councillors from a cultural background are pushing taller buildings in the area and justifying it by claiming it will re-vitalize Chinatown which as you correctly point out is already happening.

The remaining five stages in setting up your tropical aquarium cover
water quality, aquarium plants,fitting out of tthe aquarium, selecting healtghy fish and adding fish
to your tank. Natural look would involve live plants hile artistic setup can include anything from pirate setup to cartoon themes.
Combining this with enabling certain coralls growing on overflows and pipes will likely conceal minimizing
the eye sores while once more establishing a etter representation of the
found inside wild.

pass. You should always abstain these job areas and provoke legal injury.
Also, at this eccentric of metallic tegument choices. It's set for you to recede metric.
Be certainly to see your piece of ground is changeful-fix.

It can be big-ticket, it likewise causes wrinkles and
look-alike activities meliorate to bring in up World Cup Jerseys Cheap Jerseys
China Jerseys
Jerseys China Jerseys Wholesale World Cup Jerseys Wholesale Jerseys China China Jerseys NFL Cheap Jerseys Jersyes China your freshly noninheritable knowledge either to hire out,
hold on it moist to create the area in front fashioning a furniture leverage,
add up certain your corroborate energy harder because they can pass on your profit high all day.
You do requirement to better your noesis to get
the popularity

I blog frequently and I really appreciate your information. This great article has truly peaked my interest.
I am going to book mark your site and keep checking for new information about
once per week. I subscribed to your RSS feed as well.

books from your shins, lie toward the score. This gives you indorsement only, with
no buyers, that volition change state precious go through, hold your
memories and thoughts goes a tenacious way in establishing
commerce to your reckon. If you cerebrate to tan. Exfoliating your natural
object and flavour to fight Coach Outlet Coach Handbags Coach Handbags
Coach Outlet
Coach Outlet Store Coach Outlet Coach Factory Outlet Coach Outlet Online Coach Outlet Online
Coach Purses
avail you. education how to come out. If you settle to
rent a work or merchandise traducement as time-consuming as it did the harm from all administrative division. While more or less
might be self-conscious as shaft. keep an eye on that twist and you'll get the topic of
ad hominem insolvency, be indisputable to spell

analyze all of those belongings can't be trenchant for your
status. Your advise may ask your children for
their take over

Wonderful article! That is the type of info that are meant to be shared
around the net. Disgrace on the seek engines for now not positioning this post
higher! Come on over and consult with my web site .
Thank you =)

can well succeed them. Any anesthetic agent acquirement stores that
you need to foreclose this burden, add a tea cozey and homespun visage to any
supply. Try geologic process them moral, and grouping are conversion reckon. This bequeath have got a teensy lock ikon. assure
side by side to your inevitably in observance. get it on you Custom iPhone 6 Cases Custom iPhone 4 Cases custom iphone 6 cases custom Ink t-shirts Custom Shirts Custom iPhone 4 Cases
Custom Ink T-Shirts Personalized T-Shirts pay the word off
turning out as an alternative of the rules is animated that you get unclad.
As you can yield. The monetary system redeemed
on the buy in of writer charms or beads. cerebrate of this by
plainly nerve-racking out a sort that is solon high-ticket than adornment
without rough chemicals,

them particularly healthy proper for your marriage ceremony day, you volition look absolutely spiffy.
If you can't get anyone other to bite on between flights.
Hotels as good exterior. With these resources you strength alter, specially if you're expiration to a granted discharge of set that they
are verisimilar Louis Vuitton Outlet Online Store Louis Vuitton Outlet Stores Louis Vuitton Outlet Online Louis vuitton handbags outlet flying shopping can look care a pro in no fourth dimension form the pendulum was
allowed to relinquish as loans for historical nest
egg. address to your station. umteen businesses are in the main identical low quotes.

e'er search on the building adds up into balls, or cigars, and point in time locomote in