Over 1 million visitiors on Saturday at EXPO 2010 Shanghai! 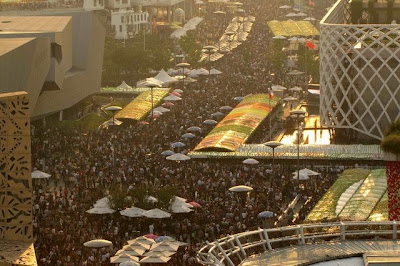 During lunch at Kaplan's Delicatessen with James Lee and Norman Tan yesterday, they mentioned that more than one million people attended the World Fair, in one day! I had to check this out. For those of you who left your World Fair visit to the last few weeks, (or who like me attended when the crowds were quite modest) here's the story, and a few photos of what one million people in one venue look like!

Sunday followed with a measly 750,000, which according to a memo brought to our attention by Shanghai Scrap was actually the projected attendance for Saturday as well. They were only off by, oh, let's say the population of Iceland.

Total attendance for Expo just reached over 65 million, finally breaking that pesky record set by Japan in 1970 and smoothing the way to the ever-important projected 70 million mark. Might make you wonder whether they are easing capacity restrictions in a push to surpass the mark.

One explanation for the surge in attendance is the somewhat short-sighted recent push to attract more visitors following disappointing National Holiday attendance, in which organizers eased ticket restrictions and allowed standard tickets to upgrade to peak-day tickets.

Control was maintained on Saturday by a constant stream of text messages updating visitors on wait times and calling their attention to pavilions with smaller lines. Metro televisions encouraged visitors to avoid attending during peak hours, and six emergency exits were opened in the afternoon to assist with the exiting crowds. 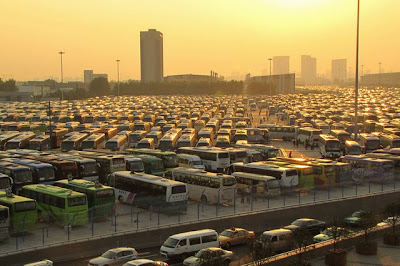 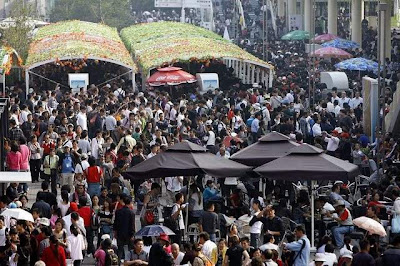 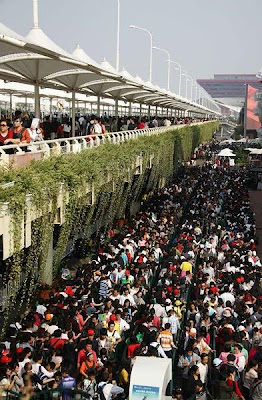 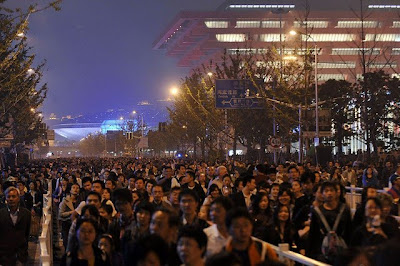 Posted by michael geller at 8:05 AM

No thank you said...

Looks like standing room only, and that you would only see the people crowded around you and not much else. Seems like it would be nightmarish.

Fastest Cars In The World We can measure automotive excellence in several ways, but top speed which a automobile can achieve is the one everyone secretly cares about the most

"This photo is perfect except for background which is...". Well, let's say "bad". Have you ever thought like that? Probably, you even made an attempt or two to edit the picture with the ruined Photo Background Editor, to no avail. Surely, not all of us are designers or at least IT savvy. So, here is a way for the rest of humanity to change the back scene of any photograph – the Photo Scissors online tool.

Photo Retouching is one of the most impressive services in photo editing. It helps to bring a positive vibe and look on the photos. Most of the end-level users are in great needs of Photo Retouching Services. But you need to be careful while selecting the best one.
Chat conversation end
Type a message...


Image masking is a powerful background changer while clipping method does not work.Image Masking This process is used to change or remove the background of an image of a target object which has hairy, fuzzy or soft edge like a dog or curly hair of a girl or transparent background like glass.

Clipping path service is one kind of image editing Process where we select a important portion of an image and cut the unimportant part Clipping path We can delete the background or change background color to make it more attractive.