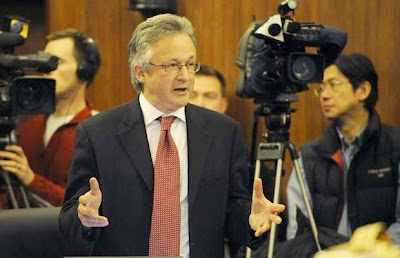 Since last Thursday night, yes night, when Council voted on the future of the Olympic Village social housing, there has been a lot of commentary and discussion on whether Council had any choice in deciding what to do. In a column in today's Vancouver Province, and on CKNW, Geoff Meggs has responded to the significant public criticism by suggesting the City did the best it could do. I disagree. The following is my response to Councillor Meggs and a letter I have sent to the Province newspaper...

There is no doubt that selling the social housing units would have been a dramatic political move for this council...and that's why it didn't happen.....but the units could have been sold from a legal, financial and even 'ethical' perspective. Selling the units was not a 'theoretical' option, as Penny Ballem told Council.

It bothers me to hear Geoff Meggs and others say this could not happen for legal reasons. I have spoken to the lawyers...it could have been done, especially since the city holds so many cards with Millennium. Yes, it would have required some modifications to agreements, but this happens in business, and government, all the time.

To say that it was risky because of the need for rezoning is silly...similarly, to say a decision had to be made quickly because of rising interest rates is mischevious...given the spread between potential costs and revenues, (over $120 million) a 0.15% or 0.5% increase in interest rates would be minor.

Much has been made of the fact that the rental units are not being subsidized. But this is not entirely correct...in some respects they are. A portion of the $32.1 million is being used to 'write down' the economic rent of these units to equate to market rent. The $32.1 million is not just for the core-needy units. This isn't set out in the staff report, but it should have been.

Furthermore the rental rates for the 3 and 4 bedroom units, while they seem high, are well below the average rental rate on a square foot basis for the downtown. Vancouver rates are generally $2 a foot or more...but the 3 bedroom is proposed to rent for $2,100 (about $1.71 sq.ft.) and the 4 bedroom at $2,370 ($1.60) because the units were not suitably designed as market rental units. Had these units been sold, the staff report estimates they could sell for up to $1,184,000 for the larger units.

I am very disappointed with staff and Council on this matter. The fact that this report came through as a late submission showed poor judgement and was unfair to the public. This report was essentially written months ago...I know....since the contents were shared with me and others in the housing industry on a confidential basis at that time.

What I am hearing from staff and council are excuses, not reasons for the decisions they have made. I can't help but wonder whether they are genuinely misinformed or just trying to justify a politically based decision.

Geoff Meggs 'Opinion" column on the Olympic Village 'affordable housing' reminded me of a company I used to work with. Whenever something went wrong, management would search for someone to blame. Then they would try and fix the problem.

City Council should not have spent $64 million to keep these units as 'affordable housing'. Instead it could have sold them and received up to $68.8 million, one of the staff options. To avoid 'competition' with the Millennium units, these could have been sold as leasehold, rather than freehold, with other conditions if necessary. Meggs claims to have been worried about the risks associated with rezoning. Hello? Isn't the rezoning decision in Council's hands? As for our commitment to the International Olympic Committee, I think they would have understood if we asked to build less expensive units on the city owned lands immediately next door..

Meggs concludes that there is nowhere to spend the $68.8 million the city might have received from the sale of these units. This is nonsense. There are numerous 'social housing' sites around the city lying fallow since the city doesn't have the money to do something with them. And aren't we supposed to 'end homelessness' by 2015. This takes money too, money we now don't have. What an unfortunate decision.

Posted by michael geller at 1:48 PM