I can't help but smile at the irony.

Perhaps moved by the Christian spirit of Christmas Sunday, my daughter Claire and I joined a large number of Muslim and Jewish volunteers on Sunday December 20 to help feed the hungry. The program has been operating on the third Sunday of every month for the past four years in a hall at the First United Church at Hastings and Gore Streets in the Downtown Eastside.

The idea for Feed the Hungry came about almost five years ago from discussions between members of the Masjid ul-Haqq Mosque and Congregation Ahavat Olam, led by community leaders Tahir Din and Rabbi David Mivasair. According to a September 2005 story written by Baila Lazarus in the Jewish Independent, (formerly the Jewish Western Bulletin), a small cluster of local Muslims and Jews wanted to come together to build bridges across the faiths that held mutual distrust and suspicion and help those less fortunate than themselves.

The program seems to be accomplishing two important goals. It is helping to feed almost 300 hungry people while breaking down some of the often publicized animosity and barriers between Muslims and Jews. 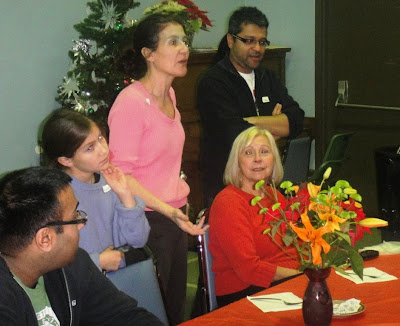 Yesterday there were approximately 40 volunteers, split almost evenly between Muslims and Jews. Tasks included preparing the food in the kitchen, flower arranging, (yes there were flowers on the tables) serving, cleaning-up, and greeters. I was a greeter, and my eyes were opened by the parade of people who lined up to get a meal. I could not help but notice the very high proportion of native people and blacks who came by, and the variety of personalities. Some people were very gregarious; others were very shy and almost ashamed to have to be lining up for food. 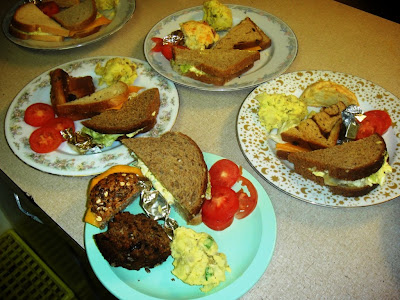 Before the meal service I was given a tour of the church shelter by Frank, one of the long term workers. He told me that when the shelter initiative was proposed by Rev. Ric Matthews and approved by the city approximately a year ago, it was determined that 150 could be accommodated each night. However, some of the people with whom I spoke were amongst the 350 people who had slept in the church that night. Yes, 350 people are now sleeping in the church each night on pews and cots that have been set up in a number of areas. And now on the floors. While most are men, there is a separate area for women. 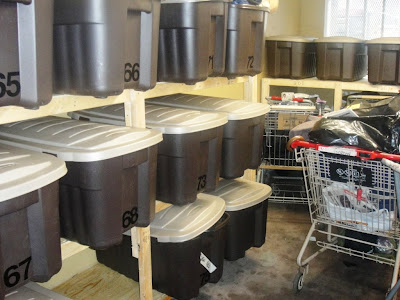 Possessions are stored in the basement in large rubber 'tupperware-like' containers that I was told were funded by Vancity. A small area is also used to store shopping carts. While the shelter is obviously greatly needed, looking around at the limited number of bathrooms, and bodies all over the place, I cannot believe this is a sustainable solution.

Pray and Connect
Ironically, it did not seem that the church offers traditional Sunday services. There are too many people sleeping in the chapel. But the Muslim-Jewish initiative does offer an opportunity to pray and connect. It is described by the Rabbi and Muslim leaders as an opportunity to share brief prayers and personal reflections on experiences of the day. It is also an opportunity for the volunteers to get to know one another a bit better and learn about each others' customs and traditions.

Other DTES initiatives
As I reflect on my discussions with those who came for a meal, a number of thoughts come to mind. The first is something I already know....that there is a need for better housing and increased welfare and shelter rates. But I also wondered about the possible benefits of a few other initiatives, that might be offered at considerably less cost.

The first is a program to try and re-connect some of the people with their families. Now I realize that many are living on the streets because of intolerable home lives. But I couldn't help but think some of the people would be interested in reconnecting with certain family members in Vancouver or back home (and yes, many of the people I spoke with came originally from Toronto and Montreal and other parts of BC). However, someone would have to help 'broker' the reconnections. One of the church workers thought this might work for some people. Is there an agency in the DTES that tries to do this?

Another thought is whether some of the men would welcome the opportunity to get cleaned up for the holidays...to have a decent shave and haircut. I didn't discuss this with anyone, but I couldn't help but think this might be a welcomed treat. I don't even know if there are barber shops in the DTES but maybe this should be explored. If people wanted this, I and no doubt many others would happily donate money to make this happen.

The other thing I could not help but notice was the desperate need for dental care. I understand that there are some programs operated by the UBC dental school, and a few community spirited dentists like Larry Cheevers in the DTES.

Now I suspect that some will be laughing at these ideas...how dare I talk about shaves and dental work when what people really need are homes and money and programs to help address mental illness and drug addictions. I know. But some of the people I spoke with said they wanted to get some work, and I am convinced it would be easier if they looked a bit more ready for work.

A final thought...from speaking with one of the community workers at the church.... WHY DOES EVERYONE IN THE DTES WHO QUALIFIES FOR WELFARE GETS THEIR MONEY THE SAME DAY EACH MONTH. Everyone who works in the community knows it creates havoc. Welfare Wednesday, or whatever. Why not spread out the payments over different dates, A to G one week, H to M another and so on.....We no longer renew our license plates on the same day...

In conclusion, I am very glad that Claire and I spent a couple of hours at First United rather than doing other things. I suspect there are many opportunities for others to help out in the community. I noted that the Muslim-Jewish Feed the Hungry program is dependent on donations of food and money, and there also is a need for other personal hygiene supplies...toothbrushes and toothpaste, soaps and shampoos...just to name a few. There is also a need for gloves and hats and scarves...all things that most of us have an over abundance of in our homes. Details are available on their website
Posted by michael geller at 5:23 AM

Thanks, Michael for your posting and heads up, today. Good on you and the inter-faith venture out of 1st United, one of my former places of ministry, too. We may have met before... via one or more social justice ventures being engagted these days -- Mel Lehan's initiated city-wide housing coalition; or, perhaps, the Saul Alinsky-rooted community organizing via the newly formed Metro Vancouver Alliance; or...? In any case, I too anguish over the charity-justice tensions, perhaps, in the long run, a necessary if not inevitable dialectic like that of contemplation/prayer and justice? I bid you and your brother/sister associates well in your adventuresome endeavours. Keep posting in touch, please.

What a great story Michael. I, too, have often opined as to why we continue this archaic practice of 'Welfare Wednesdays'. Wouldn't it be more efficient to break it up, as you suggested, or in some similar manner? Of course it would, but that would disrupt some ridiculous process designed by successive godamned union lackeys that have been overseeing this for decades. It's really quite absurd that we can't facilitate the dissemination of these dollars to the needy in a manner that makes their lives (and ours) easier.

But what would life be without yet another astute observation by Sir Michael, on how our political system(s) continue to confound and perplex?

Very best wishes to you and yours this year.

The fee for different therapists can depend on
the total duration of their therapy plan. Your talents can also be of use
in rehabilitation centers. RTs can also explore the option of branching out into business roles with equipment manufacturers, or join the world of research and academics.
My website :: New-Comment-Anchor

The fee for different therapists can depend on the
total duration of their therapy plan. It is not uncommon for massage therapists
to consult with physiotherapists before and during a
massage. You will also get the chance to participate
in discussions along with your fellow students.
Feel free to surf my web page : family psychotherapy without the patient present

I enjoy what you guys are up too. This type of clever work and coverage!
Keep up the very good works guys I've added you guys to blogroll.

If some one desires expert view concerning running a blog afterward i recommend him/her to
go to see this website, Keep up the good job.

Hi there. I'm sorry to hassle you but I happened to run across your web site and noticed you are using the exact same template as me. The only problem is on my blog, I'm battling to get the layout looking like yours.
Would you mind emailing me at: demi-guest@arcor.
de so I can get this figured out. By the way I have bookmarked your internet site: http://www.
blogger.com/comment.g?blogID=4088226422072866788&postID=6404200380855797809 and will be visiting often.
Thank you!

Feel free to surf to my web-site: electric circuits by nilsson and riedel

We absolutely love your blog and find most of your post's to be what precisely I'm looking for.
Does one offer guest writers to write content for you? I wouldn't mind writing a post or elaborating on a few of the subjects you write related to here. Again, awesome web log!

Greetings! I've been following your weblog for some time now and finally got the courage to go ahead and give you a shout out from Humble Tx! Just wanted to tell you keep up the good job!

Hello there! This is my first visit to your blog! We are a group of volunteers and starting a new project in a community in the same niche.
Your blog provided us beneficial information to work on.
You have done a outstanding job!

It's truly a great and useful piece of information. I am happy that you simply shared this helpful information with us. Please stay us informed like this. Thanks for sharing.

It's difficult to find educated people on this topic, but you seem like you know what you're talking about!
Thanks

Thank you for sharing your info. I truly appreciate your efforts and I
am waiting for your further post thank you once again.

Feel free to surf to my webpage Garcinia cambogis

Hello, after reading this remarkable piece of writing i am also happy to share my know-how
here with colleagues.

Hi mates, nice post and nice urging commented here, I am in fact enjoying by these.

I really like looking through an article that can make men and women
think. Also, thank you for permitting me to comment!

It's really very complex in this active life to listen news on Television, thus I simply use web for that purpose, and get the most up-to-date information.