Secondary Suites and Laneway Housing: it's getting confusing for some! 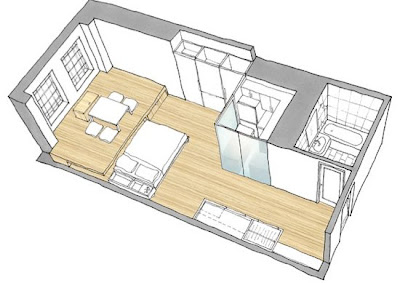 council will consider a staff report Tuesday that recommends allowing secondary suites and laneway houses as small as 19 square metres (about 200 square feet).

As evidenced by Neal Hall's story below, one journalist was a bit confused by Council's decisions on June 16 to forward both Secondary Suites and Laneway Housing to a Public Hearing on July 21...

The small secondary suites would be only allowed in apartment blocks and mixed-use buildings in commercial areas along arterial routes, in downtown and the Southeast False Creek area.

The laneway housing would be allowed in 94 per cent of the city’s residential areas.

The secondary suites would have a separate entrance, full bathroom and kitchen, all within a 20-foot by 20-foot space.

Current zoning regulations allow secondary suites with a minimum floor area of 29.7 to 37 square metres (319 to 398.3 square feet). But city council has made affordable housing a key priority and is trying to find ways to increase rental housing stock.

The small secondary suites would be generally new construction because it would not be very cost-effective to retrofit into an existing building, he said, but conceded it could be done.

“This is part and parcel of a four-part program of council to create low-range and mid-range housing,” Louie said.

The report suggests no increase in parking space be required for small secondary suites because they will likely appeal to students, low-income renters and seniors who will use bicycles, transit or walk.

Louie said the proposal is expected to go to public hearings and return for a council decision before the end of July. There is some urgency because has a .3-per-cent vacancy rate, he said.

Height would be limited to 1.5 storeys. and the footprint would be the size of a two-car garage.

Adding secondary suites to apartments is not a new concept.

UniversCity, a condo development at Simon Fraser University, built 25 units five years ago with “lock-off” secondary suites of about 250 square feet that rent for $500 to $600 a month — roughly $2 a square foot.

“It was the first of its kind in ,” said Gordon Harris, president of SFU Community Trust, which oversees development of SFU land for market housing. He credited council for supporting the innovative idea.

He said the units were the first to sell because they offered flexibility — owners could initially rent the suites, live in the main suite and then expand into the secondary suite if they had children.

The program is limited to 2.5 years and estimates building 1,000 units would provide 1,600 full-time jobs, thereby stimulating the local economy.


Although Neil confused the details of the two propositions, (the laneway cottages are expected to fit into a 20' x 20' space), I am pleased that both are going forward to Public Hearing on July 21. As expected, the proposition to allow suites as small as 205 sq.ft. did attract a fair amount of criticism, as evidenced by some of other news story headlines...

While I do not necessarily believe there will be a big take up of this idea at first, I think the secondary suites are a good idea and should be allowed. However, my advice to city staff and council will be to change the proposed size requirements...280 sq.ft.minimum with discretion by the Director of Planning to relax this requirement down to 205 sq.ft. Instead, I would recommend a minimum suite size of 250 sq.ft. rather with no DofP discretion to reduce this size. This could increase the likelihood of success.

Posted by michael geller at 6:23 AM

i definitely love your writing taste, very remarkable,
don't quit as well as keep writing due to the fact that it simply well worth to look through it,
impatient to view more of your current well written articles, have a pleasant day!

I've attempted to your previous 35 a lot of many years to drop and Carry on to help keep OFF my stomach entire body fat. I have attempted each and every matter from diet program capsules, personal trainers, nearly just about every foods program ever proposed, I at this time pay out on two fitness center memberships, at any given time, and have not had the time for you to use the advantages of the two amongst them in above a 12 months. I've to state that only factor that aided me crash diets for men hoping the
ambiance, ease as well as availability on the
amenities currently being opened from 5:00a.m till 10:
00pm would motivate me to stay on track, attend quite a
few the cardio lessons, aquatics lessons, phase lessons etc…

My spouse and I stumbled over here from a different web address and thought I should
check things out. I like what I see so i am just following you.
Look forward to looking at your web page yet
again.

my weblog: treatment for toenail fungus

I visited many web pages except the audio feature for audio songs
existing at this web site is actually superb.
installing hardwood floors

When I initially commented I clicked the "Notify me when new comments are added" checkbox and now each time a comment is added I get three
e-mails with the same comment. Is there any way you can remove people from
that service? Cheers!

Feel free to surf to my site :: lforlazarus.socialmediapresskit.com

This is a topic that's close to my heart... Many thanks! Exactly where are your contact details though?

Who would have thought the same person with a traditional career in Wall Street could be the same person now creating edible art.
Georgina Clatworthy is a dedicated full time writer who composes informative
articles related to wedding favors and wedding. During the heady days
of the Roman Empire, wedding guests were served not one cake but a
sumptuous collection of many small treats and pastries as a
kind of wedding party favor.

Have a look at my page ... Birthday Cake Decorating Ideas

* Rustic- To add variation you can give a rustic look to
one of your bedrooms. Interior designers have the training and experience necessary to do a good job.
From Disney Princess bedding to wall decor, from curtains and valances to beautiful rugs depicting
Cinderella's magic castle.

I'm really enjoying the design and layout of your blog. It's
a very easy on the eyes which makes it much more enjoyable for me to come here and visit more often.

Did you hire out a developer to create your theme? Exceptional work!

Look into my weblog ... diet plans that work

Hi, I think your website might be having browser compatibility issues.
When I look at your blog site in Safari, it looks fine but when opening in Internet Explorer,
it has some overlapping. I just wanted to give you a quick heads
up! Other then that, terrific blog!

Hi there to every one, it's in fact a nice for me to visit this web site, it includes important Information.

It's remarkable in favor of me to have a web site, which is good in support of my knowledge. thanks admin

I believe this is among the most vital info for me.
And i'm satisfied reading your article. But wanna remark on some normal issues, The site style is perfect, the articles is in point of fact nice : D. Excellent job, cheers

My homepage easy diets that work

Hi! Would you mind if I share your blog with my twitter group?
There's a lot of folks that I think would really appreciate your content. Please let me know. Thanks

It's amazing in support of me to have a website, which is good designed for my know-how. thanks admin

Wow! After all I got a blog from where I know how to really
obtain useful data concerning my study and knowledge.

What i don't understood is in fact how you are not actually much more smartly-favored than you might be now. You are very intelligent. You realize therefore considerably when it comes to this subject, made me in my view imagine it from numerous numerous angles. Its like men and women are not interested until it is something to do with Lady gaga! Your individual stuffs great. All the time maintain it up!

Very quickly this web page will be famous amid all blogging and site-building
users, due to it's fastidious posts

Decorative pillows that complement the pattern or color with the wallpaper or the rug tie the room.

In case your daughter is somewhat older, you could have to acquire somewhat
desk or desk for her to implement. Right here are some alternatives to
suit your needs to contemplate.

Here is my web page :: www.roomdecorationideas.org

Asking questions are genuinely fastidious thing if you are
not understanding anything totally, except this paragraph presents good understanding
yet.

Grate article, We at Addhunters shifted this service to a level much higher than the broker concept.
you can see more details like this article
For sale in lusail qatar