The future of Vancouver's Downtown 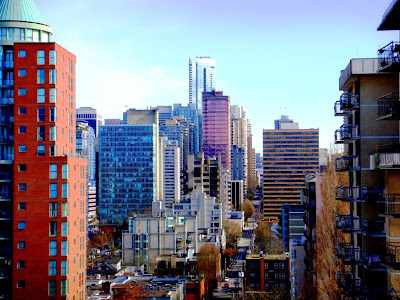 On Tuesday night I found myself in a very unusual position. For a while I thought I might be the only person at a Public Hearing defending residential uses in the downtown. Fortunately, a few others, including respected former City Planner Chuck Brook came forward to state a similar position.

I did not enjoy being in disagreement with either Brent Toderian or Kevin McNally, two very capable planners. However, as Edward de Bono noted in his book "I am right, you are wrong" we both came at the topic with different information. My thoughts on the topic were recently posted at www.citycaucus.com but are repeated below:

On April 21st, 2009, while most Vancouverites were in front of their televisions watching the Canucks defeat the Blues in overtime, a very small group of people was gathered in the Vancouver City Council Chamber at a Public Hearing. It is a sad irony that so few people were watching this ‘game’ since its ramifications for our city will be even greater than a Stanley Cup victory. Let me explain.

The purpose of the Public Hearing was to consider a staff report, almost five years in the making, under the heading: Metro Core Jobs and Economy Land Use Plan: Part One, Proposed Downtown Policies. The proposals before Council included zoning changes affecting the Central Business District (CBD) and adjacent lands. The thrust of the initiative was to provide sufficient job space potential in the Downtown to meet future demand, to strengthen and intensify commercial uses in the CBD, and to maintain the commercial mix of historic Yaletown.

Now I appreciate that these seem like noble goals, and one might wonder what the problem is. Let me explain.

I do not have any disagreement with the overarching goals set out in the staff report. The problem is the manner by which the Director of Planning is proposing to achieve these goals. More specifically, the recommendations include increasing the permitted commercial density by 2.0 FSR across the CBD. I support this.

However, the report also recommends ‘the removal of residential as a permitted use across the expanded CBD to ensure that potential development capacity is not taken up by residential, and that land values remain reasonable for commercial development as a result of reduced land speculation for residential use.’ I do not support this.

As respected former City Planner Chuck Brook, one of only seven speakers at the meeting passionately told Council, what distinguishes from or most other North American cities is the inclusion of residential as a permitted use in the CBD. This is what has contributed to the vitality of our downtown neighbourhoods and allowed an increasing number of people to walk to work. It is what has made distinctive.

Now, there is no doubt that as Trevor Boddy and others have exclaimed, in many instances city planners may have gone too far in allowing residential development to replace commercial development. Boddy’s fear is that is “heading towards a fate as a dormitory suburb” and ‘resort city’, rather than a major commercial centre. I do not entirely disagree.

I would point to the conversion of the former West Coast Transmission building, the cabled box on , from office to residential use, as a perfect example of what should not have been allowed to happen. However, to now propose that we protect job space potential by eliminating residential as a permitted use is simply wrong. It is throwing the baby out with the bathwater.

I also disagree with the concern that permitting residential development will result in land speculation that will prevent office developments from proceeding. Office developments will proceed when policies encourage commercial development, and there is a market for more space. A speedier and less convoluted approval process will also help.

At the Public Hearing, a number of councillors expressed their desire to see new large corporate head office buildings in the downtown. However, as Mr. Brook cleverly responded, given the changing trends in corporate office development, these types of buildings are becoming ‘the Hummers and Escalades’ of urban development. Instead, vibrant mixed-use buildings and developments are what we should be striving to achieve.

I attended the meeting on behalf of a client who controls the block along between Richards and Homer Streets. Under the proposed zoning changes, he would not be allowed to build any housing, even though the site is adjacent to L’Hermitage, a mixed-use development that was recently completed on a site sold by the city for the purpose of mixed use development!

This irony was not missed by a L’Hermitage resident who spoke at the meeting on behalf of his neighbours at home watching the hockey game. He moved into the development with the expectation that it would be a vibrant new neighbourhood. He did not want to be surrounded by commercial only buildings.

I encouraged Council to seek zoning changes that would encourage more commercial development, while still permitting vibrant mixed use developments. I noted that this is what City planners, architects and developers have been working towards for the past twenty-five years. In response, the Director of Planning agreed that mixed use developments were indeed desirable, and advised Council that they would still be possible…. through a rezoning. He reminded Council that a rezoning process would also allow the city to extract the desired financial contributions and amenities from the developer.

In other words, the city should downzone properties by removing residential as a permitted use, (even though we agree it adds to the vitality of the city), on the understanding that developers can always apply for a rezoning and hopefully offer sufficient ‘public amenities’ to be allowed to do what they should be encouraged to do in the first place.

This is the wrong way to plan a city.

Council should reject the current proposals and direct staff to come forward with revised zoning schedules and other policies that encourage commercial development, while allowing mixed-use where appropriate. These should include Development Cost Charges and Community Amenity Contributions that address any additional costs associated with residential development.

In the lobby of the HSBC building is a giant pendulum. I enjoy watching it swing. However, in the case of theses proposed Bylaw changes, the pendulum is swinging too far. I hope Council agrees we should not remove residential as a permitted use in our downtown, and insist that the Director of Planning continue ’s tradition of thoughtful, carefully crafted Zoning Bylaws to create a city worthy of international acclaim.

Council will make its decision at 2 pm on May 5th. Hopefully there’s no hockey game to divert our attention.

I'm amazed, I have to admit. Rarely do I come across a blog that's equally educative and amusing,
and let me tell you, you have hit the nail on the head. The issue
is an issue that too few men and women are speaking intelligently
about. Now i'm very happy that I came across this during my hunt for something relating to this.

Look at my site - bankruptcy in florida

One of her most popular products are her organic
vegetable seedlings, especially the tomatoes, which are cool-weather varieties that do
well on California's foggy Central Coast. Blotches or tunnels usually mean your plant has leaf miners. Try these top five organic garden weed controls that actually work.

Take a look at my web page ... jaywalk

There are a few types, mainly fine, regular, or rough.

) at a rate of one drop of essential oil per tablespoon of base oil.
These can be expressed in a number of ways: straight
hair, slightly wavy hair, or curly hair.
From my experience, it is quite difficult to style hair immediately after a hot oil treatment, so you might want
to skip the curling iron or hot rollers. There are many products these days that can help with keeping your hair in good
condition but what of oils.

my weblog ... how to make hair grow faster

This simulator combines the realistic control
panels and control experience with the military element.
If you make mistakes and you use a simulator, then it will cost you
nothing. Best of all, the basic version of this game is free.
In order to compete for market shares on routes you must have
a virtual airline management game account. If you are looking for a
fun way to spend your weekends, aflight simulator
games is one of the most fun things to have.

I simply could not leave your web site before suggesting that I
really loved the standard information a person provide in your visitors?
Is gonna be back continuously to investigate cross-check new posts