Machu Picchu: one of the 7 wonders of the world 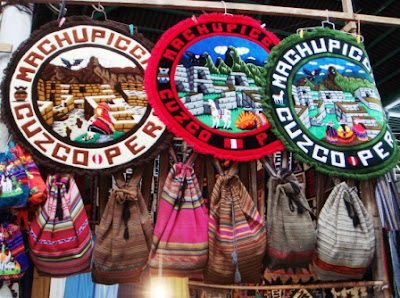 At 4:30 in the morning we received our wake-up call. At 5:30, we were loaded into a waiting van and taken to the train station. We didn't take our luggage, just an overnight bag, since we were warned there was not much luggage space on the Vistadome 2 train. We didn't get off the bus in front of the station like most other passengers. Instead our driver went up a narrow lane and dropped us off right at the train. I guess this why people pay the extra premium for tours! 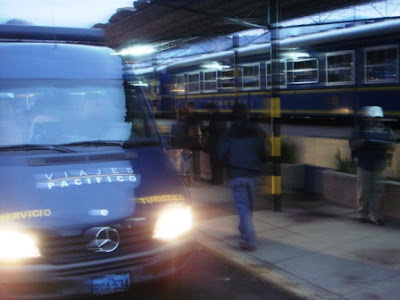 There are three train services from Cusco to Aguas Calientes, the town next to Machu Picchu; the backpackers’ special, the Vistadome, and the Hiram Bingham. The premium for the Vistadone is about $50 and definitely worth it. The Hiram Bingham is a luxury train and costs about 3 or 4 times what the Vistadome costs. You also have to take a bus to catch it since it doesn’t come into . It might be worth investigating, especially if you want your breakfast and dinner served by men in dinner jackets. Although, our crew looked quite smart in their navy suits. 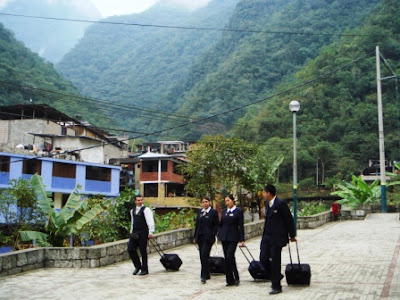 If you have the choice, try and sit on the left side of the train going and the right side returning. We quickly realized that this was going to be a very memorable journey with constantly changing scenery. After some good views of , we went through small towns and villages set into the mountains. At one point, a lot of cacti appeared. Then we were in the jungle. Every once in a while we saw Inca ruins and regretted that we were not fit enough to have done the 4 day Inca Trail hike from Cusco, which Georgia and many others had done. 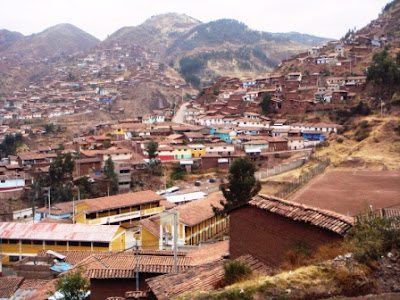 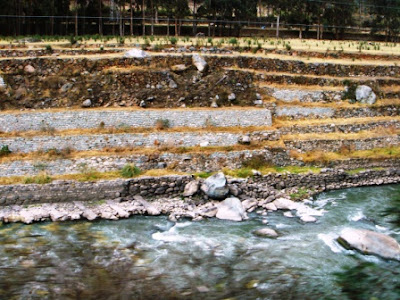 I found that I wasn't taking as many photos as others on the train; but then, they lived in places like and and didn't regularly travel the Sea to Sky highway. 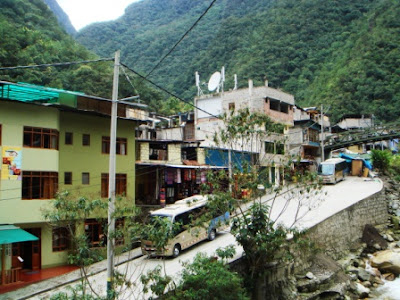 Around 9:30 we arrived in Aguas Calientes, a small town which initially didn’t appear to be that attractive, from where we took an exciting 30 minute bus ride climbing up a tortuous road to the site. 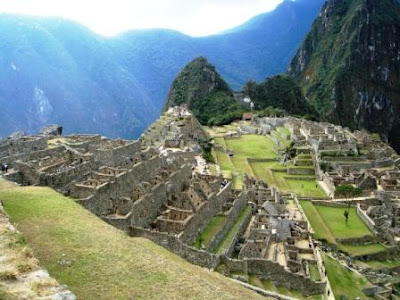 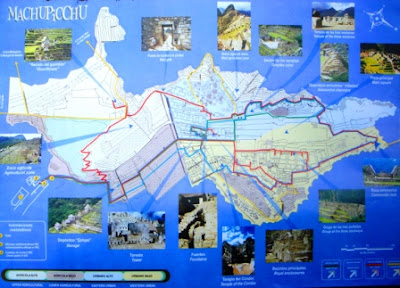 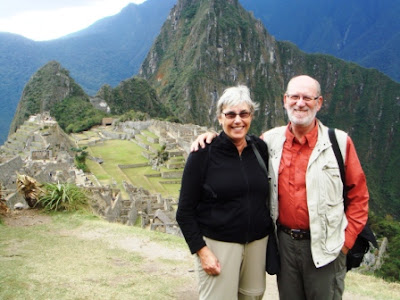 is one of the new 7 wonders of the world. While I did not find it to be as impressive as the temples around Angkor Wat, or Bourabadour in , (the largest religious structure in the southern hemisphere), it is an amazing sight in a very majestic setting. We soon realized that visiting it is not for the faint of heart, especially those with a fear of heights, or in poor physical condition. There can be a lot of climbing along very narrow unprotected steps. But there are also lots of easy trails. Just like Whistler. 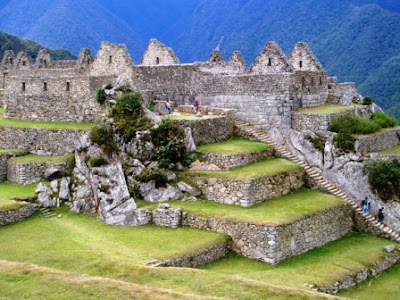 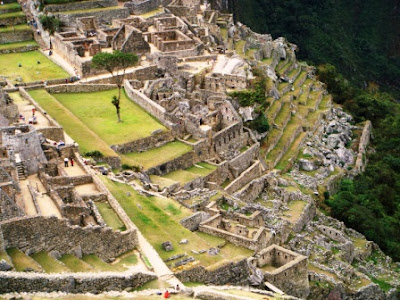 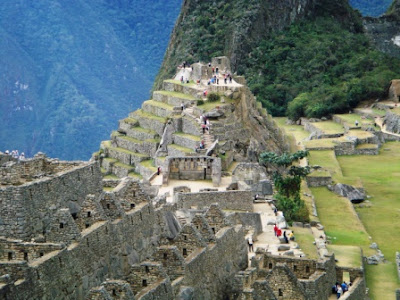 Not a lot is known about the origins of . It was probably built in the 15th century for religious and military purposes. It was 'discovered' in 1911 by Hiram Bingham who was exploring in for and the National Geographic Society. He apparently was told about the ruins by one of the locals who he paid to take him there. He returned on a number of occasions, taking many artifacts with him. The Peruvians would like some of them back. 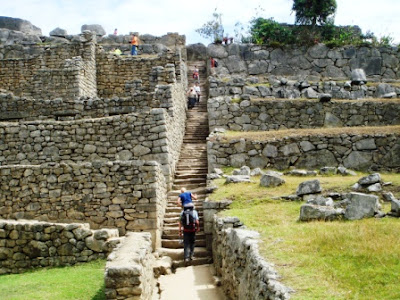 The lack of information about is illustrated by the story of some skeletons that were found at the site. 135 skeletons were found and it was determined that 109 were females. This led to speculation that the site accommodated primarily women who were fleeing the Spaniards in , and were the chosen ones of the Inca. 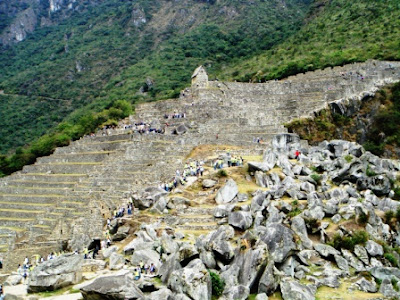 However, it was recently determined through more sophisticated DNA analysis that the ratio of men to women was about 50/50. This has put an end to this speculation. However, one thing that is certain is that the Spaniards never discovered . 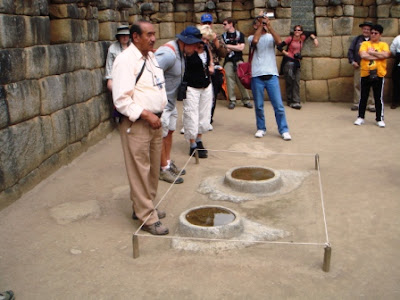 As we wandered around our guide kept pointing out things that are still unknown, like two small circular pools carved into the rock. What are they? 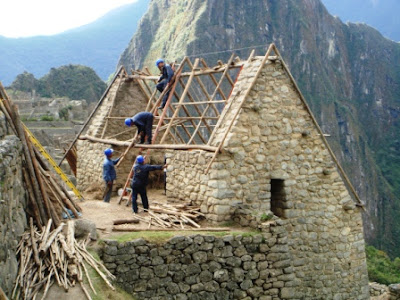 As we wandered around we noticed some new construction taking place. It seems that much of what is there is restored, in part since Hiram Bingham did a lot of damage by trying to burn off all the vegetation that had covered much of the site. We also came across some llamas that have free roam around the property. 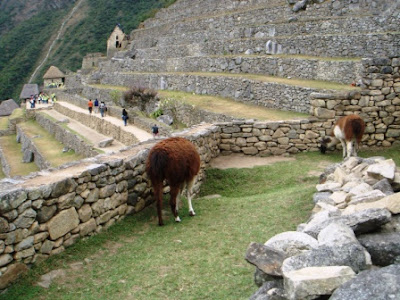 We spent much of the day looking around; but we didn't go back the second day as initially anticipated, since Sally has a fear of heights, and many of the better climbs can be quite treacherous coming down. But we saw enough to appreciate the special qualities of the place, and are now keen to learn more about the Incas and their place in history. 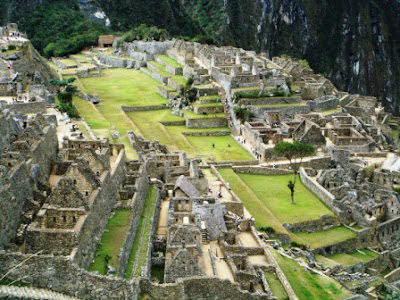 had always been planned as our last stop of this journey. It was a very good way to end it. We were glad that we had booked a tour through a travel agent, and can heartily recommend Florencia at Barcelo Verger Business Travel in . Whatever you do, book a tour with someone. It’s so much easier.

One final thing. There is a very nice hotel, the Sanctuary Lodge at the top of the mountain. It’s about $600 a night or more. We chose not to stay there, preferring to pay less and be in the town. We don’t regret this decision. But we did have the buffet lunch there. This, I do recommend, since it allows you to have a break, and then go back for more climbing with a stomach full of ceviche and alpaca.

Posted by michael geller at 9:20 PM

You are going to need a lot of cooking utensils to cook this Thanksgiving meal. Do it even if you're cooking on a gas stove. You have several options for vegetables. Distribution: National. I had previously seen Lucky Charms and Cheerios shirts, but this was unexpected.

I rarely comment, however i did a few searching and wound
up here "Machu Picchu: one of the 7 wonders of the world".
And I actually do have a few questions for you if you tend not to mind.

Is it just me or does it look as if like some of the
comments come across like coming from brain dead individuals?