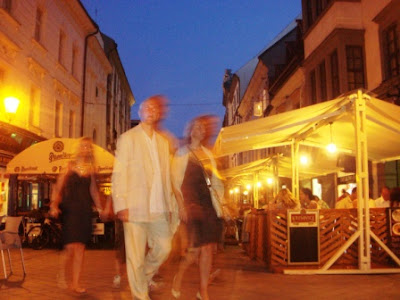 I can distinctly remember sitting in our family room on Deering Island last December looking at a map of Europe and deciding we should visit Slovakia, if only to discover how d 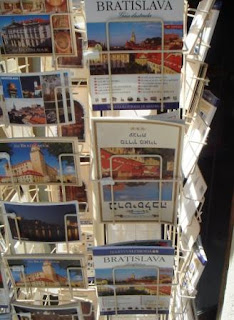 ifferent it is from Slovenia. Well now we know.

We have just spent two days in , and once again, we were very pleasantly surprised. This is a city where I thought I might have to carry a fake wallet in the event I was held up at night. But it wasn’t necessary. turned out to be a very cultured, lively, and safe city.

From the train station we took a tram to the downtown Tourist Centre. It was very well organized with extensive brochures in almost a dozen languages. We arrived without a hotel reservation assuming we would have no trouble finding a place to stay. We were right. We were presented with an extensive choice of accommodation, ranging from very luxurious hotels to pensions and h 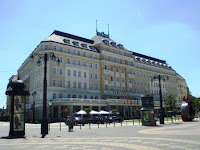 Our preference was a hotel, but we were encouraged by the lady behind the counter to consider a private apartment. It seems many of the local residents leave town in July and August and rent out their places for some extra income. Since we had had such good luck in , we agreed and were soon whisked away in a taxi to an apartment in what seemed to be a very nice part of the old town. Ten minutes later, we were sitting alone, holding the keys to a very large apartment with far more space than we needed. We carefully wrote down the address and marked our location on a map to ensure we didn’t get lost after a night on the town. We then set off to explore. It was Friday night. 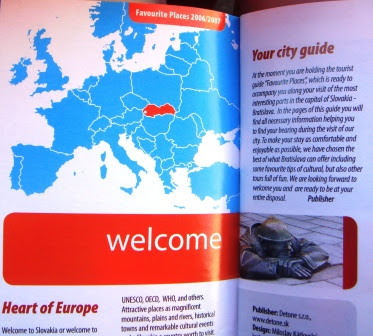 Like , does not consider itself part of . It thinks of itself as being in , at the heart of everything. For those of you who like me can’t figure out which country was once part of which, used to be until the country split in 1993 (without a referendum, I might add) .Today, compared to , seems to be struggling economically, but there are signs that things are improving. There is an impressive number of construction cranes in the downtown; the bars and restaurants seemed very busy, albeit on Friday night; and the cost of many things is approaching a par with and . 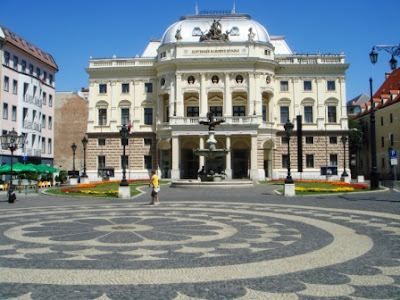 The old town is full of very grand and impressive buildings and public spaces. While many buildings need exterior repair and renovation, I was particularly taken by the amount of public art, the number of cultural institutions, and what felt like an overall creative ambience. 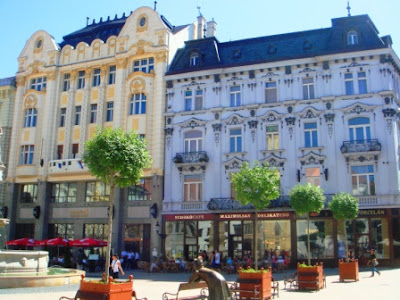 I was surprised to find a Jewish Museum that celebrates the contribution of the Jews to the life of the city before the Second World War. There were numerous palaces, churches, and a castle overlooking the city. At the , which forms part of the castle complex, we saw three excellent traveling exhibitions on French tapestries, Giotto frescoes, and the engravings of Albrecht Durer. 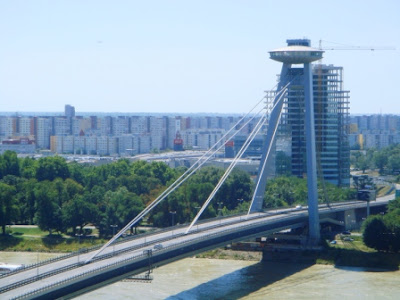 Like , the city is bisected by the . It is not the Blue Danube. It’s almost the same colour as the outside our house. We took a short cruise travelin 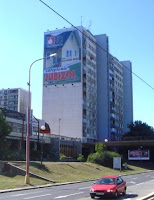 g under some very impressive new bridges. We were told that one was constructed in two halves that were swung into place, connecting in the middle. (Of course they met perfectly; the engineers from this part of the world are very capable!) At the top of one new bridge sits a revolving restaurant that no doubt helped fund its construction.

This was just one

example that capitalism is alive and well in . There are many other examples, such as the number of large billboards around town on the sides of multi story apartment buildings. Can you imagine that being permitted in capitalist ? I also saw some interesting new apartments, including this multi-coloured block that reminded me a bit of Albania. 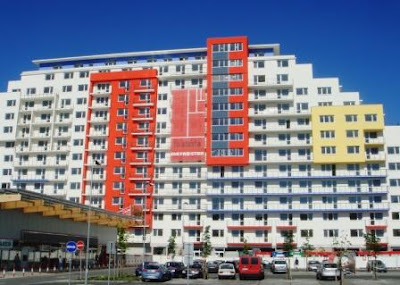 While we enjoyed wandering around the city and meeting some charming local people, we do have one complaint. The food. Traditional Slovakian food is not something we will yearn for. I will not be recommending this city to David and Barbara Gillanders who select their travel destinations, in large part, based on the quality of the local restaurants. Most restaurants seem to cater to those who like stewed beef combined with chicken livers, onions, garlic and peppers, on a bed of sour cream. (Ok, to be fair, there are other choices, but there sure are a lot of goulashes made from different animals in very heavy sauces.) 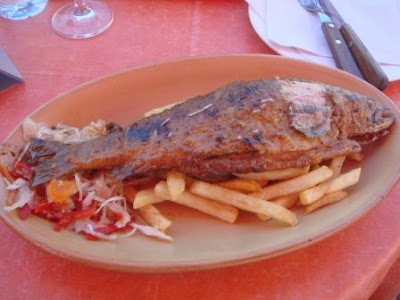 After two days it was again time to move on. We spent Sunday morning sitting in our large apartment, backing up photos on DVD’s while watching BBC World. Suddenly, the announcer said has just been voted the most livable city in the world, beating out , . “We can’t let them get away with this” he said. “Let’s take a look.” What followed was a 10 minute trip around town with CBC’s Margaret Gallagher 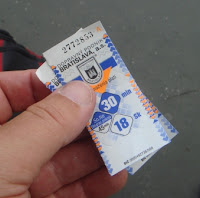 and Jamie Mah. Then they went off on the train to Whistler and whale watching on . and Our city and province looked pretty good, and got the thumbs up from the BBC!

At the train station, before setting off for , we had two remaining tasks. When we purchased our train tickets from to , we were told it was cheaper to buy return tickets than one way tickets! So we wanted to give away the return portions to someone who might use them. I also had some unused transit tickets. I mention this since they were unusual

in that tickets are priced on the time traveled, not the distance. I had never encountered this before, and didn’t want to see the time go to waste.

At 12:25 a train destined for arrived at Platform 1. Learning from our past mistakes, we used up our remaining korunas to stock up on hearty sandwiches in case we got hungry before . Of course, this time there was an elegant dining car on the train. The trip was pleasant, although unbelievably hot, since this part of is going through an unprecedented heat wave. Hopefully it will over before our next trip from to . In the meanwhile, we are looking forward to at least days in , and maybe longer if there are complications with the Russian Visas. 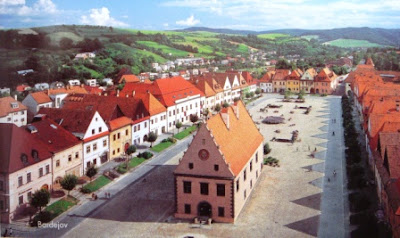 As for , we will be back. Despite the food, this city is definitely worth a return visit. We also think would be an easy country in which to rent a car and explore the surrounding countryside with its numerous UNESCO sites, spas, castles, palaces and even a model town. Check it out, before it becomes as expensive as .

Posted by michael geller at 1:51 AM

There are features that allow you to keep track of vendors that you like and keep notes so you know why they are listed.
What is even more exciting is that you will be
able to keep this wedding website for one year, at no cost
to you. So even though it's been annoying at times that I've had to do most of
the planning of this wedding myself, it's been good for the same person to have an understanding of everything that's going on.

At this time it appears like Movable Type is the best blogging platform out there right now.

(from what I've read) Is that what you're using on your blog?

Well with the internet the world has suddenly become the
customer base of many businesses, especially Facebook.
This company sends out invites from the page to innumerable people and gets the invitations accepted.

Like anything else in this world, you get what you pay for.

Search for professional Internet Marketing Companies India and let
an experienced copy writer craft eye-grabbing ad content for your business.
of the Yahoo community. I recommend this online marketing formula to beginner's.

It is through urine and feces that we purge
our body of infection. - Direct vaginal contact with chemicals,
dyes and perfumes. Although the treatment has been successful for many people
with Candida, be warned that some of the side effects may include
excessive vaginal discharge, discomfort and burning in the vaginal area.


Also visit my web blog ... can you get a yeast infection after period

Those that are not familiar with the area will treasure this information above all else, and it will help them enjoy your wedding more thoroughly.
This is the perfect chance to send a wedding announcement.
If you don't have time, think about hiring someone for Best wedding website.

Those that are not familiar with the area will treasure this information above all else, and it will help
them enjoy your wedding more thoroughly. Instead of sending
your scanned invitation, it would be great if you create your own wedding website and
invite your friends and relatives. With the advantages that technology is affording for us
now planning that special day is a lot easier and simpler.

squares with various tea leaves and tea flavors inside each
square. A murder mystery game is a fun way to pass the time during the
twenties theme party. The game would begin with them watching
the collapse of society and the outbreak of magic around the world.


Take a look at my webpage - progressive insurance

I believe this is one of the such a lot vital information for me.
And i'm glad reading your article. However should commentary on few normal issues, The web site style is great, the articles is really nice : D. Just right process, cheers