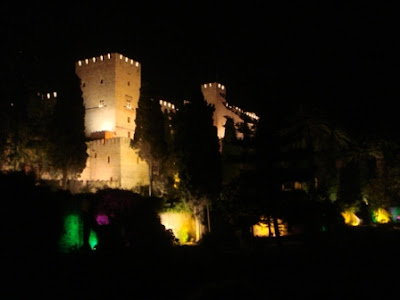 I first learned about the medieval town of in my History of Architecture class, 40 years ago. But the textbook photos didn't do it justice. A World Heritage listed site, the old town is the largest inhabited medieval town in . It is in remarkably good condition, given its age. 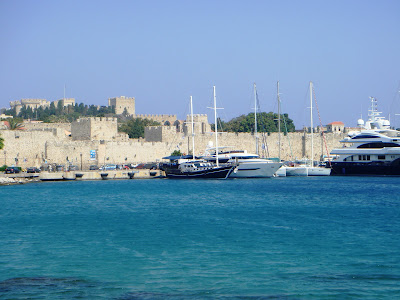 Our boat docked right outside the old city, and the juxtaposition of the modern ships and the historic wall was most impressive. As is becoming our habit, we arrived without any hotel reservations since

we didn't know where to stay. But as soon as we saw the medieval streets of the old town, now lined with shops and restaurants, we knew this was where we wanted to be. So while Sally had a coffee and watched the tourists go by, Claire and I set off and quickly found what she described as a very ‘funky’ place for the night.

We then set off to explore. The history of has been both fascinating and tumultuous. It has gone through many regimes and rulers. In 1100 BC, it first began to exert influence and power, and at one point joined forces with the Persians against Alexander the Great. But when it became apparent he couldn’t be defeated, it joined with him. After a subsequent victory, the , one of the seven wonders of the Ancient World was constructed. However, according to some historians, it was tragically destroyed by an earthquake only 60 years after it was completed.

Rhodes was part of the Roman Empire, the , and then enjoyed independence. In the

middle ages, it was ruled by the Knights of St John, until taken over by the Ottomans, who were then defeated by the Italians. In 1947, after four decades of Italian occupation, it became part of . However, the Italian connection is reflected in the local language and the number of pizzerias! 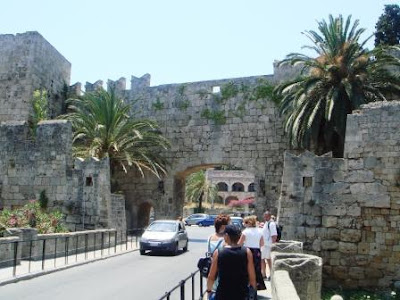 At one time it was ho 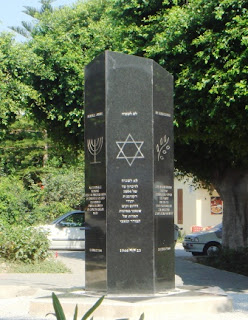 me to a sizable Jewish community and the 'Jewish Quarter' exists to this day. A monument to the Jews who were killed during the Holocaust occupies a prominent location in a major town square. Although there aren't very many Jews living here today, there is a synagogue that was originally built in the 16th century. It is still operating, and on Saturday I dropped by, along with a small group of Americans who had just come off a cruise ship. In one respect, it reminded me of a very old synagogue I had visited in the . The floor. The former had a sand floor; this one had a pebble floor. However, like many other floors and pavement surfaces in , the pebbles had been arranged in an intricate and quite beautiful pattern set in concrete. 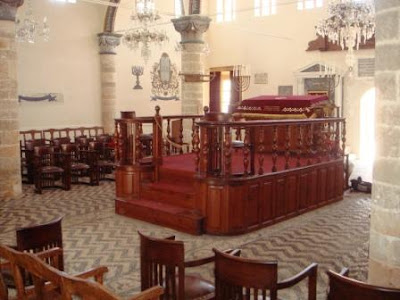 One of the reasons the walls of the old town walls have survived so well is their construction. They are generally 12m thick! Many of the medieval buildings are also in good condition, although the Palace of the Grand Masters was destroyed in a gunpowder explosion in the mid 19th Century, and had to be rebuilt by the Italians. As we walked along the main street constructed by the Knights, I couldn’t help but overhear two of the Americans off the cruise ship. “Touch these walls, Agnes” said one to the other. “They’re history!” 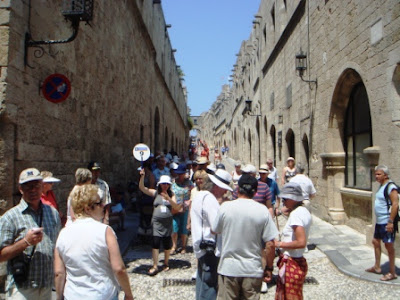 We visited Rhodes to

use it as a stepping stone to and see the old town. However, many areas around the island have become very popular tourist destinations, especially for B 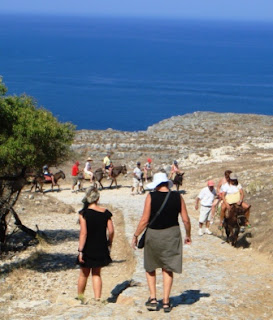 rits on package tours. While we avoided them, we did visit Lindos, which is famous for its hilltop archeological site, and the white painted hillside village that surrounds it. Most of the streets are too narrow and treacherous for vehicles, but they are just fine for the donkeys that regularly transport goods and tourists up and down.

As a result of our recent harrowing experience with animals, (the camels in Rajasthan!), and our need for some exercise, we walked. But in a couple of places, we would have preferred the sure-footed donkeys, especially given the steep incline and sudden drop to the valley below. (I find that as I get older, I seem to be developing a fear of falling off narrow winding walkways onto the rocks below.) 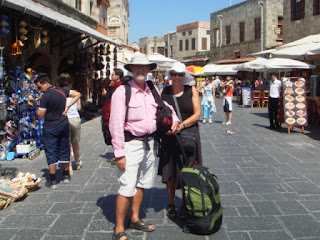 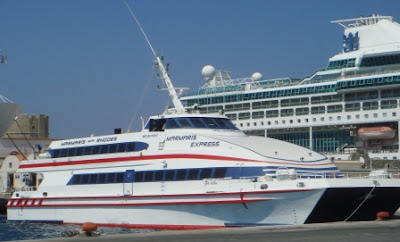 It’s a pattern that will likely repeat itself many times over the next three months before our return to .

In fact, some of these resumes will have been submitted by job seekers that are not qualified or experienced for the open position in any way, but have simply applied to any and all jobs. With the induction of sixth pay commission in India the remuneration figures are at par with many counter alternatives from private sectors. Depending on how long you have worked in your current career field, you have probably moved up the salary ranks over the years. A university with a solid reputation or department with a good reputation will help you.

Where they learn techniques on how to improve their patient's mobility, relieve their pain and treat temporary or permanent disabilities, through various therapeutic techniques and procedures. Joseph's
Medical Center, a regional medical center in Maryland, receive from $19.
Your best bet is to find an ACOTE accredited school because these schools are recognized as offering the most thorough education.
Feel free to surf my web blog : depression counselors indianapolis

The work involves building customer relationships, identifying and presenting the market and the customer requirements as well as organising and participating in trade exhibitions.

To work as a dental therapist, you need to know that the public sectors are your major employers.

These counter reactions can make the people suffering from
anxiety disorders experience severe emotional and financial
troubles, which can make it harder for them
to live their lives normally.
Here is my webpage :: wukonoov.spruz.com