Back on the Trains: Jaisalmer to Chandigarh 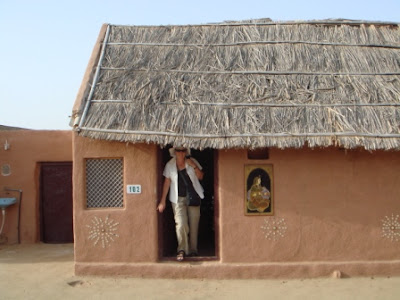 We awoke the next morning, happy not to be in the middle of the desert. After breakfast in the courtyard in front of our cabin, we were taken on a tour of the nearby small desert village. It was quite fascinating and remarkable. Inside one of the small huts, someone had covered the walls with Christmas decorations and pictures torn from magazines. One of them showed a small house set in an English garden. Obviously, this was their dream; but they were a long way away. 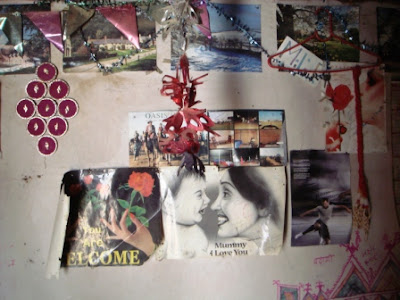 At mid morning we left the camp and went back into the town. Again, it was really too hot to do very much, so we returned to our hotel and stayed in the room taking regular showers in an effort to keep cool. It was about 46 degrees outside. Around one o’clock, we went off for lunch, following which we returned to our favourite internet café to see if there was any more good news! But after a short while, the power went off (a frequent occurrence), and we 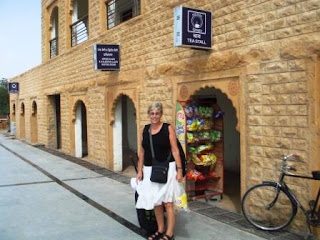 returned to the hotel, took another shower, and set off for the train station and the 19 hour trip back to Delhi

We were just getting settled into our seats when we were visited by our ‘neighbours’ from the next compartment. They were part of a large group of families and friends from and Jaipur, who had been in Jaisalmer to visit a temple and experience an overnight camel safari. Most of them spoke very good English and a few were in the Travel and Tourism business. They too had been out in the desert during the storm, but had managed to keep out of the rain. They told us the storm was an extremely rare event for this time of the year. 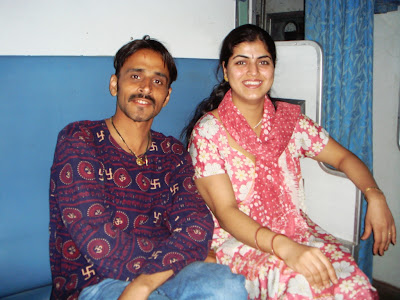 They were interested in our travels around and our experiences with Indian Travel Agencies. They looked at our itinerary, told us we had paid much too much, but noted this was not uncommon. Unfortunately, the close relationship between a few tour agencies and the government tourist bureau is well known, and many other tourists have been fooled and ended up in a similar situation to us. They urged us to follow up with our consulate, since then the Indian Government might pay more attention. We promised to do so, and will.

Over the next few hours, one by one, different members of the group came to sit with us. We enjoyed it immensely. Someone had a bottle of Indian whiskey that didn’t take very long to finish off. We were particularly impressed with three of the children who stayed with us for hours. They were so bright, and interesting, and the time passed surprisingly quickly. This group of elegant, well educated people was so different than most of the other people we had met in . How different our experiences might have been had we met up with them when we first arrived! At 11 pm, someone got off the train at and returned with large packaged dinners for everyone, including us. Around midnight Sally said goodnight to her new friend, we popped some pills, and went to sleep, with our baggage secured under our beds. It was a much more enjoyable night than that in the third class sleeper, but it still didn’t compare with the Chinese trains where we had a private, secured compartment and much nicer bedding and fixtures.

We arrived in around 11, and were picked up at the station by our driver, who gave us our train tickets to . He took us to the India Tourism Office/E 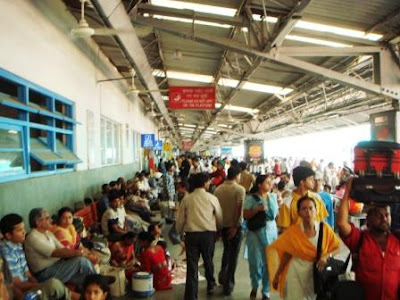 xotic Adventures travel agency where we told them about our experience in the desert and our concerns about what we had been promised, and what had been delivered. Jehangir Badyari the Sales and Marketing Director, told us that he had arranged for a car and driver to take us to . We told him it wasn’t necessary since we were too frightened to drive in , and were happy to take the train. Moreover, we already had our tickets. He then promised a full breakdown of the costs, and a refund on four train tickets that we had to purchase on our return the next day. (Of course we didn’t receive either.)

At 4 pm we were taken to another train station to get the train to . Once again, the station was a zoo with thousands of people all over the platforms. This time we were in a ‘club seat’ and were expecting something quite nice. But once again, it was the same dirty grey vinyl seats and awful toilets. However, this trip was also made most pleasant by our ‘neighbours’. 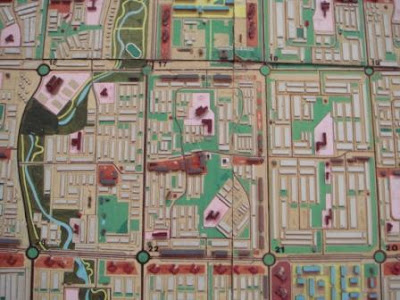 When they heard why we were going to , one of them went onto the internet and provided me with all sorts of useful background information on the original community plans. We talked about life in , the growing information technology businesses, in which one was employed. (The other was with KPMG). They also told us there had been some religious insurrections in that day and all the businesses and offices in thecity had been closed. That was why they were on the train and they said we were lucky we weren’t driving, since many of the cars on the highway were being stopped and turned back! When the train arrived in , they escorted us out of the station, fending off the taxi drivers and other touts who were after us, until we found our driver.

On the drive to our hotel, Sally remarked “This place looks normal!” Indeed, the roads were in very good condition; there were painted lane markers, traffic lights, pedestrian crossings, beautiful landscaping, and illuminated shops along the route. And there were no cows on the streets. It looked very much like many of ’s suburban areas. 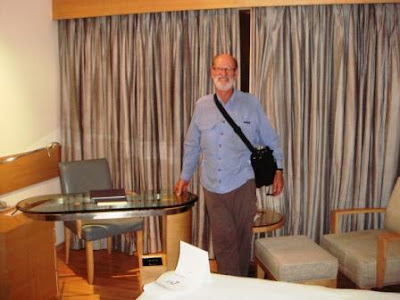 We arrived at the Taj Chandigarh hotel looking like we had just spent a couple of nights sleeping on trains and in a desert. I felt like the disheveled character in the old American Express TV ad that wanders out of the ocean into a beautiful hotel, with nothing but his Amex credit card, and is looked after very well. We too were looked after by the immaculately dressed staff and shown to one of the best furnished contemporary rooms we have experienced on our trip. We showered, changed and went down to the restaurant for a most enjoyable dinner, elated by the contrast with our previous evenings Again, we got into a conversation with a local resident at the next table who was there with his family. We learned a bit more about , and how it is generally considered, along with and , as ’s most educated and livable cities.

We returned to our room to watch more Indian commercials, music videos and situation comedies. Now we knew that that the people we saw on television really did exist in . We just hadn’t seen them on the streets of Old Delhi, and Jaipur. It was also nice to experience real bedding again. As I tried to go to sleep, I couldn’t wait to tour the city and see how Le Corbusier’s experimental town had turned out.

I read & saw your blog that given me good information. It's lovable and interesting and it has good collection. Thanks.
We are offering -
Car Hire
Car Booking
Taxi Rental
Taxi Hire
Car Hire
Cab Hire