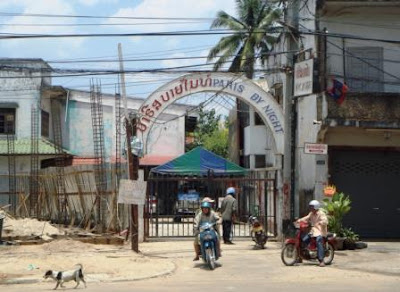 If you are not quite sure where is, don’t worry, you are not alone. A month ago, we didn’t know where it was either. But now we know, and we are happy to try and save you the bother and expense of visiting the place. 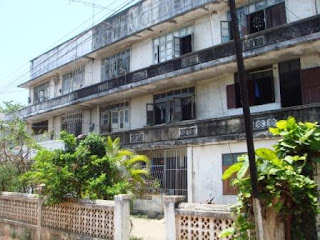 Vientiane is the current capital city of . I say current since Laos' capital does change from time to time. As you may recall from an earlier blog, Luang Prabang was once the capital. To give you some sense of the place, it has a population of 200,000. It became the capital when became a French protectorate, and it has certainly retained some of its French Colonial character. But it is not an attractive place, and there are a lot of very ugly buildings scattered around the city. However, here are also a number of good French Restaurants, cafes, and bars, and you have 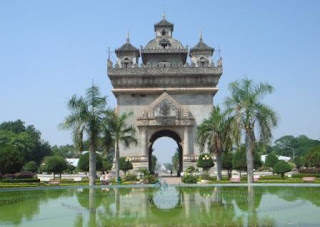 a lot of choices if you feel like a croque monsieur for lunch. There are also a couple of landmarks, includ 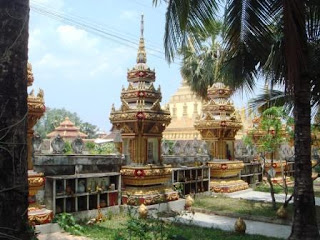 ing their own version of the Arc de Triomph, and a famous temple which adorns the cover of Lonely Planet’s edition. Speaking of which, Sally wanted to purchase some Lonely Planet guides for our next destinations. Not knowing where to go, she befriended Hamid in a restaurant, and he took her off to a bookstore in his Jeep. When she arrived, she discovered that is the sort of place where you can only buy counterfeit copies of the Lonely Plan 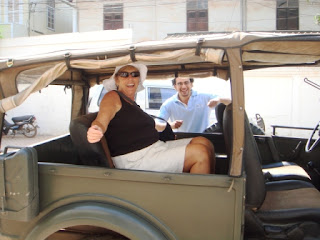 While we didn’t really like the place, we did have some good times. The Sala Sunset Khounta Bar was very close to the Novatel Hotel where we stayed. The Lonely Planet guide described it well. “At the western end of a dirt road along the riverfront, this simple wooden platform made of old boat timbers has been serving beer at sunset for years. Beerlao is the main attraction, but the friendly and 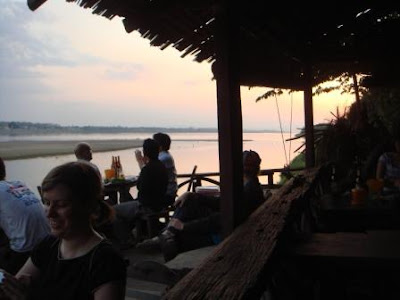 enterprising proprietors also offer an array of Lao and Vietnamese snacks including barbq fish, and deep fried cricket. The savory yaw jeun spring rolls are recommended.” We tried it all, except for the crickets!

We also went to the ci 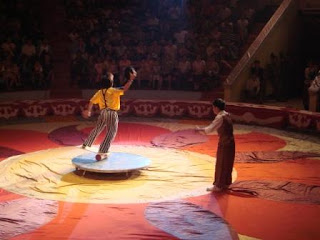 rcus. The Vietnamese Circus was in town, and the show was quite different than Cirque Soleil or any other circus that might play . I mean, how often does a Vancouver performer entertain people by wandering around the ring smashing coconuts open on his head? Or sticking large needles into his arm? My favourites were the Charlie Chaplin impersonators and the pony-tailed Japanese magician with great stage presence, who pranced around to the sounds of the old hit 'Mambo Italiano'. Unfortunately he had virtually no good tricks. Of course the acrobats were quite good, but the lady with the dogs…… 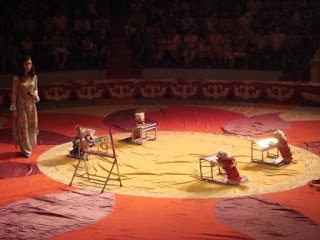 A few other highlights. Our guidebook warned us to watch out for holes in the street and sidewalk since they co 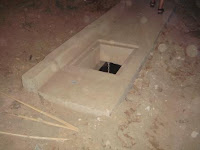 uld result in a shitty end to your day. It was true. Often there were giant holes left in the pavement, where one could easily fall through.

The is housed in a former palace. It has extensive displays on the role that the Imperialistic American Pigs played in the development of the country. Sadly, the museum is in desperate need of funds and the building and displays were generally in very bad shape, a reflection of the poverty in this country.

Within a few minutes we had discovered that they played golf at Shaughnessy; knew the Swifts, Moodies, Horwoods and even Ross McClellan with whom we were staying in It’s truly a small world.

The next morning, we were up at 4:30 to catch a 6:00 am flight to Siem Reap. Unlike Luang Prabang, we have no plans to return to Vientiane, and can't really recommend it to others. But maybe when more road works are finished, and the temperature drops below 35, and there is a bit more tourist infrastructure in place, it will be a good place to see. Especially if you want a croque monsieur for lunch, or a very good French dinner at their Café de Paris for about $6. 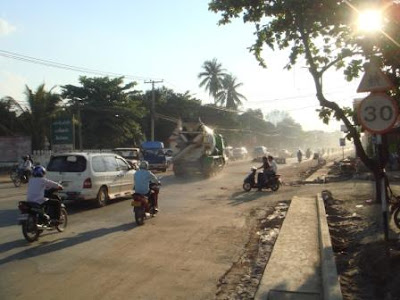