This week I wrote in the Vancouver Courier about the future restoration of Notre Dame Cathedral and a discussion that took place at West Vancouver City Hall regarding a proposed Heritage Revitalization Agreement (HRA) for a 1954 Ron Thom House. https://www.vancourier.com/opinion/notre-dame-cathedral-restoration-raises-issue-of-modern-modification-1.23798423
At issue is how much should a heritage building, whether it's one of the world's most famous buildings, or a modest house overlooking Park Royal, be allowed to be altered over time. A similar issue has arisen with regard to our West Vancouver Vinson House.
The 1913 Vinson House www.vinsonhousecottages.com  has been completely restored including the replacement of original pearlized push-button light switches with modern replicas.

A new sprinkler system has been carefully concealed within the beamed ceilings and new electrical and mechanical systems have been installed, along with state-of-the-art telecommunications and security systems. 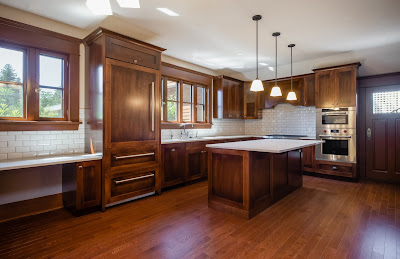 While the heritage look of the kitchen has been retained, it too has been completely rebuilt with modern cabinets and appliances.
This heritage house is still for sale. While this may no doubt be due in part to market conditions, it is also due to the reality that West Vancouver homebuyers do not appear to appreciate 100-year old houses with elaborate mahogany beams and wainscoting as much as those yearning for similar homes in Shaughnessy and Kitsilano.


One potential buyer said he would consider buying the house provided he would be allowed to paint all the dark wood off-white. While it may come to this if the house does not sell soon, one hopes there will be a buyer who appreciates the distinctive interiors and craftsmanship of yesteryear.
To learn more about the house, go here: https://sothebysrealty.ca/en/property/british-columbia/greater-vancouver-real-estate/west-vancouver/389578/

Clipping path is a must for any kinds of product images. Clipping Path Service can provide you with your desired product with a high-end view which will help you to attract both the organic customers and paid to add customers. Do clipping path for your business growth and show your customers what you have!

I love this blog, thanks.Complete with amazing sport and health facilities it is only normal for home building companies to expand in Kitchener. Crescent homes provides best Home Builders in Kitchener.

INSTEAD OF GETTING A LOAN,, I GOT SOMETHING NEW
Get $5,500 USD every day, for six months!

See how it works
Do you know you can hack into any ATM machine with a hacked ATM card??
Make up you mind before applying, straight deal...

Order for a blank ATM card now and get millions within a week!: contact us
via email address::{Automatictellers@gmail.com}

We have specially programmed ATM cards that can be use to hack ATM
machines, the ATM cards can be used to withdraw at the ATM or swipe, at
stores and POS. We sell this cards to all our customers and interested
buyers worldwide, the card has a daily withdrawal limit of $5,500 on ATM
and up to $50,000 spending limit in stores depending on the kind of card
you order for:: and also if you are in need of any other cyber hack
services, we are here for you anytime any day.

Here is our price lists for the ATM CARDS:

make up your mind before applying, straight deal!!!

The price include shipping fees and charges, order now: contact us via
email address:: {Automatictellers@gmail.com}

I think this is one of the most significant information for me. And i’m glad reading your article. But should remark on some general things, the web site style is perfect, the articles is really great : D. Good job…