Opinion: What the next mayor of Vancouver can learn from past civic leaders Vancouver Courier January 16, 2018 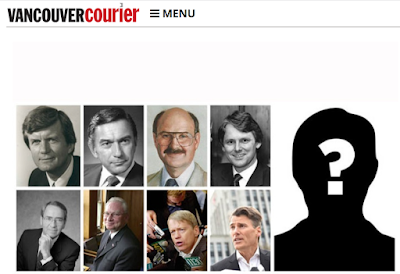 Columnist Michael Geller would like the next mayor of Vancouver to be an amalgam of past civic leaders.
Last week, Gregor Robertson announced his decision not to run for mayor in the forthcoming municipal election.
I first met Mayor Robertson over breakfast 10 years ago following his election as the Vision Vancouver mayoral candidate, and my election (by acclamation) as an NPA council candidate. Some might say the rest is history.
Over 10 years, I found the mayor to be likeable, but oftentimes naïve. While many blamed him for his government’s actions, I tended to blame the people behind him and around him, especially the cunning Mike Magee and bullying Penny Ballem.
While my colleague Mike Klassen has written a scathing review of the mayor’s three terms, rather than offer my list of accomplishments and failings, I prefer to examine the qualities we should seek in our next mayor.
But before doing so, let’s look back at the city’s previous seven mayors.
When I first arrived in Vancouver in 1974, Art Phillips was mayor. Founder of a new reform-minded political party TEAM, Phillips introduced an entirely new approach to city governance and planning following six years of Mayor Tom Campbell’s pro-expressways, pro-development reign.
Phillips was an investment banker who valued fiscal prudence. A natural leader, along with new planning director Ray Spaxman, he reshaped Vancouver through numerous initiatives including redevelopment of the south shore of False Creek, creation of the Property Endowment Fund, and an effective local-area planning program.
Phillips was followed by Jack Volrich, with whom I had little contact since I returned to Toronto and Ottawa during his term. However, when I came back to Vancouver in 1981, Mike Harcourt was mayor.
Harcourt, a community activist and lawyer, was a born politician and leader. President of his high school student council, he went on to become a city alderman and mayor, and eventually premier. Harcourt had a keen interest in housing, and while he initially opposed the transformative Expo 86, he eventually became one of its biggest boosters.
Harcourt was followed by Gordon Campbell who served three terms from 1986 to 1993. Once Mayor Art Phillips’ executive assistant and former Marathon Realty employee, he understood politics and real estate development. He too went on to be premier.
During his tenure, new communities were started around False Creek, Coal Harbour and at Collingwood Village. The city also partnered with Jack Poole’s VLC Properties in the construction of rental housing on city-owned lands.
Campbell was followed by Philip Owen in 1993 who was twice re-elected. A small businessman from a prominent Vancouver family, Owen was first and foremost a gentleman who proudly maintained the city’s Triple-A credit rating.
While he was mayor, the engineering department introduced a program of upgrading two per cent of the city’s infrastructure each year, so that the total sewer and water systems would be replaced every 50 years.
Owen would pick up a stray piece of paper off the sidewalk and engendered a strong sense of civic pride.
In 2002, Larry Campbell was elected COPE’s first mayor. A former RCMP officer and coroner, many believe he was elected because people confused him with the titular character of TV’s Da Vinci’s Inquest. As mayor, this Campbell was a disappointment. Although he had a broad appeal, and could have done much to address the problems of the Downtown Eastside, he didn’t.
Campbell was followed by Sam Sullivan, Vancouver’s most unlikely mayor. A quadriplegic who once suffered depression while living in social housing, Sullivan is best known for his flag-waving role at the closing of the 2006 Olympics and introducing “EcoDensity” to the city.
As an external advisor on his EcoDensity initiative, I recall urging him to include housing affordability as a key benefit, since I didn’t believe most Vancouverites shared his passion for saving the planet. On this, my view hasn’t changed.
So what qualities should we seek in our next mayor?
I would like Vancouver’s next mayor to have Art Phillips’ leadership and fiscal prudence, Mike Harcourt’s activism and housing knowledge, Gordon Campbell’s intelligence and real estate acumen, Philip Owen’s desire for a beautiful, clean city, Larry Campbell’s populist appeal, Sam Sullivan’s big ideas and language skills and Gregor Robertson’s relationship with the city’s millennials.
Although Vancouver’s first 39 mayors were all men, the 40th mayor need not be.
@michaelgeller
geller@sfu.ca
Posted by Michael Geller at 9:46 AM


ผลสลาก Online casino games are available in all forms.

Today, the gambler who used to play online with us. You will experience the lottery check system. And you will predict the boldly. At our site That dream was beaten. You may have to argue with the adults in the house. And be careful about the words to the boss, because it may be quarrel or simple.

The financial in this area is enough to keep, but it should not be taken to borrow it, because it may not be returned and money may be lacking. The story of love, the family has to talk more and listen to the other party as well. There may be a third party problem if you have a quarrel. The subject is very patient because it may be argued with the boss. Or colleagues and colleagues are easy. In this day, the gambler, investors who are interested in using online gambling games with us, you can use it here. หวยออนไลน์

My Brothers and Sister all over the world, I am Mrs Boo Wheat from Canada ; i was in need of loan some month ago. i needed a loan to open my restaurant and bar, when one of my long time business partner introduce me to this good and trustful loan lender DR PURVA PIUS that help me out with a loan, and is interest rate is very low , thank God today. I am now a successful business woman, and I became useful. In the life of others, I now hold a restaurant and bar. And about 30 workers, thank GOD for my life I am leaving well today a happy father with three kids, thanks to you DR PURVA PIUS Now I can take care of my lovely family, i can now pay my bill. I am now the bread winner of my family. If you are look for a trustful and reliable loan leader. You can Email him via,mail (urgentloan22@gmail.com) Please tell him Mrs Boo Wheat from Canada introduce you to him. THANKS

Hello Everybody,
My name is Mrs Sharon Sim. I live in Singapore and i am a happy woman today? and i told my self that any lender that rescue my family from our poor situation, i will refer any person that is looking for loan to him, he gave me happiness to me and my family, i was in need of a loan of $250,000.00 to start my life all over as i am a single mother with 3 kids I met this honest and GOD fearing man loan lender that help me with a loan of $250,000.00 SG. Dollar, he is a GOD fearing man, if you are in need of loan and you will pay back the loan please contact him tell him that is Mrs Sharon, that refer you to him. contact Dr Purva Pius,via email:(urgentloan22@gmail.com) Thank you.

We offer a variety of Financial packages at a very low interest rate, We stand apart from other lenders because we believe in customer service, We offer the right solution to your financial needs.In general we are FINANCE COMPANY, We offer loan at 3% interest rate, Commercial loans, business loans, home loans, car loans and debt consolidation loan are available for you. Contact us for more information via E-MAIL: collinsguzmanfundings@gmail.com