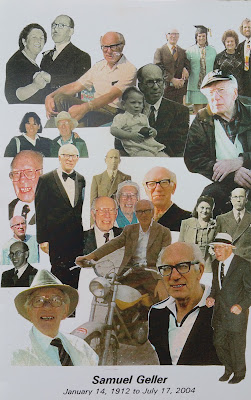 Today would have been my father's 106th birthday. While I never expected him to live to 106, he never expected to survive a Second World War German prisoner-of-war camp, let alone live to 92!

Those who met my dad knew him to be a true gentleman, with a great sense of humour. He was the sort of person who always kept his word, and couldn't understand why someone would expect a reward for returning something that wasn't theirs.

He was a fan of Edward de Bono, and enjoyed creative thinkers.

He always wanted to be a journalist but for much of his life was a barber, before becoming a librarian in York University's Scott Library, thanks to the initiative of my sister Estelle Paget www.kidcarecanada.org

While I miss him, I'm glad he didn't live long enough to see Donald Trump as president. He'd be so disgusted! Happy Birthday dad!

Many people may know that eating fried or it. It helps to make us fat and become more serious diseases, this is really true because the people who like to eat it or that like to eat fried foods are usually full of fat. More than normal Royal1688 The online betting service of the famous Asian is also a good story about the eating of pork to offer it that the eating of pork to us. Is there a risk of obesity and obesity?

And for this, the website royal1688 เล่น ผ่าน โทรศัพท์ describes obesity and obesity can occur when we eat pork often because the pork is made from pork fat with high saturated fat to pig. Oil and oil are high energy foods, so 100 grams of uncooked pork provides up to 420 calories.

And if it is a plate of pork, the energy is increased to 600 calories ever. We see that eating pork has helped us. Obesity is a disease that people are easily encapsulated so if one does not want to risk obesity, it should be avoided to eat some pork belly.

My Brothers and Sister all over the world, I am Mrs Boo Wheat from Canada ; i was in need of loan some month ago. i needed a loan to open my restaurant and bar, when one of my long time business partner introduce me to this good and trustful loan lender DR PURVA PIUS that help me out with a loan, and is interest rate is very low , thank God today. I am now a successful business woman, and I became useful. In the life of others, I now hold a restaurant and bar. And about 30 workers, thank GOD for my life I am leaving well today a happy father with three kids, thanks to you DR PURVA PIUS Now I can take care of my lovely family, i can now pay my bill. I am now the bread winner of my family. If you are look for a trustful and reliable loan leader. You can Email him via,mail (urgentloan22@gmail.com) Please tell him Mrs Boo Wheat from Canada introduce you to him. THANKS