While exploring New York City last week by foot, subway and the hop-on hop-off buses, I often felt like a kid who had just come in from the farm. While I am preparing some columns for the Vancouver Sun and Courier on housing ideas that are worth trying out in Vancouver, here are a few photos from my album. 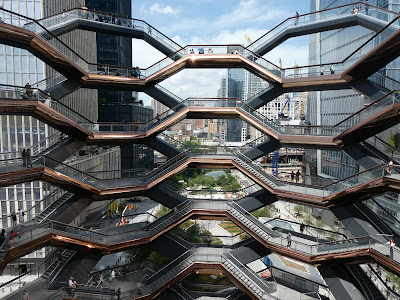 A couple of months ago, I received an invitation to attend an affordable housing symposium in New York, from the New Cities Foundation, https://newcities.org/ an organization I had never heard of. But it had been a while since I was in NYC, and although limited details were provided, I decided to attend in the hope I would learn how American cities are addressing homelessness and other affordable housing challenges.  I subsequently received the one-day program. Key topics were right up my alley and included: 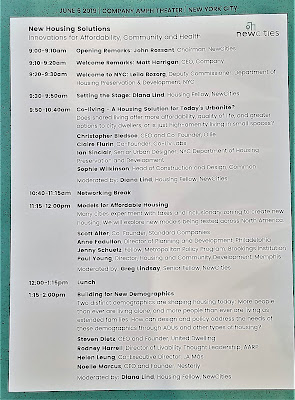 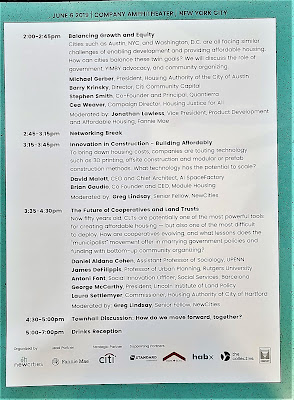 While a lot of the conversation was not relevant since the US has a very different governmental tax structure to support affordable housing, other topics were most relevant and at times fascinating. For example co-living, something for which I have long advocated, is considerably advanced in American cities where new companies like Ollie https://www.ollie.co/ and Common https://www.common.com/ are providing forms of housing unlike anything currently available in Vancouver. While we have many examples of younger, and older people living together in shared arrangements, I suspect it's just a matter of time before we see companies like this operating here.
I knew it was worth travelling to New York when I heard participants talking about the benefits of 'pressure walls', a term I had never even heard of. What are pressure walls? http://www.roomdividersny.com/pressure-walls/
Another session which I found particularly interesting was on the topic of ADUs or accessory dwelling units. In Vancouver, we call the laneway houses or coach houses. While not very common in the United States, State of California does allow ADUs as a matter of right, and this is led to some innovative initiatives including the backyard homes project which incentivizes homeowners to create an affordable rental unit in their backyard. While this might sound like the Vancouver program it is in fact very different. https://www.mas.la/affordable-adus
Under this program, a non-profit organization offers homeowners a one-stop shop for financing, designing, permitting, constructing and leasing an ADU to a low-income resident receiving government rental support for a minimum of 5 years. While the program is new, and relatively untested, it remains to be seen if it will work. However, it is an innovative approach to house the homeless, and others seeking affordable housing.

I was also intrigued by United Dwelling https://www.uniteddwelling.com/ which encourages people to turn their garages into affordable dwelling units.
Another program of interest is Nesterly https://www.nesterly.io/ which arranges home-sharing between generations. One of the co-founders grew up on Cortes Island and has very close family ties to Vancouver. I have been promoting similar programs in Vancouver since there are hundreds of thousands of empty bedrooms in Metro, many of which could be used to house those looking for affordable housing. https://www.citynews1130.com/2015/05/04/empty-rooms-in-vancouver-homes-could-help-solve-housing-affordability-problem-architect/ 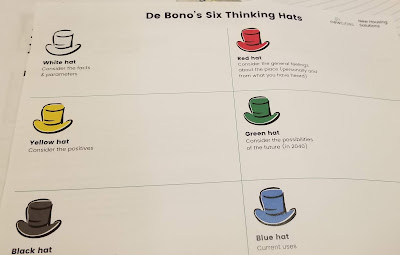 I knew I had made the right decision to attend this event when one exercise involved assessing the various ideas presented using Edward deBono's 6 thinking hats. As many know, I am a great fan of deBono and have often promoted his books at my lectures.
At the symposium, there were architects, government officials and housing planners from across the US, but also France and Spain. I was particularly delighted to meet Antoni Font, Social Innovation Officer for the City of Barcelona who is overseeing a relocatable modular housing initiative very similar to what I proposed for my university thesis and now currently underway in Vancouver and elsewhere around the province. http://gellersworldtravel.blogspot.com/2016/02/relocatable-modular-housing-for.html
For those interested in the current Vancouver experience with modular housing for the homeless, go here: https://vancouver.ca/people-programs/temporary-modular-housing.aspx
While most of the attendees familiar with Vancouver recognized that our situation is quite different from most other North American cities, there is no doubt that we can learn from the US experience, and they can learn from us.  A future symposium might examine in detail the different housing programs offered by federal, state, and municipal governments in the US and federal, provincial and municipal governments in Canada.
I was impressed with the program arranged by New Cities and look forward to participating in future symposiums and events. There are many good ideas out there that should be shared.

Posted by Michael Geller at 8:11 AM No comments:

Opinion: This Vancouver resident has taken it upon himself to beautify city, one box at a time Vancouver Courier June 3, 2019

My recent columns about the disgusting condition of city-owned public parking garages, the need for more public toilets, homeless people camping on sidewalks and diminishing civic pride generated many responses from Courier readers.


While some saw my columns as an unnecessary attack on the homeless, most agreed the city should do a better job of cleaning its parking garages, removing discarded needles from public areas and managing graffiti.

However, I received a surprising email from one reader who wrote to share what he personally has been doing to address what he saw as the deteriorating condition of our public infrastructure.
His story is about the Arbutus Corridor where the lingering conflict between CPR and the city resulted in 15 years of neglect. Graffiti was everywhere, along with garbage and an extremely poor sense of civic pride. However, as we all know, this has changed.Thanks to an agreement between the city and CPR, the rails were removed in 2016, and the Arbutus Greenway came into existence. It took a while, but it has become an important commuter route for cyclists and a pleasurable walkway for joggers and dog walkers.
As both corridor users and passersby may have noticed at every level crossing there are large metal boxes that once controlled the railway’s flashing lights and bells. They had become unsightly and covered with graffiti. However, at his own expense, this individual regularly paints over the graffiti on each of the 17 boxes with colourful designs.
He has also built street furniture at 16th and Arbutus — a place he calls Crossbuck Park — in an attempt to preserve a tiny bit of railway history, something he claims the city has very little interest in.
While city officials might worry about the consequences of other citizens deciding to take the beautification of the city into their own hands, I would like to think that, with some management, this could be a positive thing.
After all, we have a precedent in the Greenest City 2020 “street garden” program in which neighbourhood volunteers attractively landscape public boulevards and traffic circles.
City-organized neighbourhood cleanups are another example of residents undertaking what most usually expect government to do.
Another surprising response to my last column was the number of people who urged me to watch a Seattle KOMO 4 television news special titled “Seattle is Dying.”
This controversial program has attracted almost four million views and deals with the problems of homelessness, drug addiction and crime in that city. While the situation portrayed is horrific, and much worse than what most of us think is happening in Vancouver, Seattle wasn’t always as bad as it is today.
Moreover, the problems featured in the film are found in many cities throughout America, especially those on the West Coast.
The program is the third in a trilogy. The first was called "There But For the Grace of God..." which explored homelessness in 2016.
The second was called "Demon at the Door" about heroin addiction.
As the producer notes, this third program is about the consequences of homelessness and drug addiction. It interviews citizens who no longer feel safe taking their families into downtown Seattle and parents who won't take their children into neighbourhood parks. It's about the growing degradation in the downtown and related theft and crime.
But it does offer a solution, namely the Medication-Assisted Treatment (MAT) program in Providence Rhode Island administered by that state’s Department of Corrections.
An online review of the “Seattle is Dying” documentary reveals considerable angry debate about the program and how it proposes addressing the related problems of homelessness, drug addiction and mental illness.
I shared the documentary on Twitter, adding that Vancouver is not Seattle.
However, a False Creek resident responded: “The personal sickness and despair shown is exactly what we see in our 'hood daily. The garbage and filth on the streets, the stench, the crime — all the same. The successful approach in Rhode Island saves lives and preserves quality of life for all. Why can't YVR do better?”
I agree. Vancouver must do better. But it will take combined action by politicians, city officials, police and caring residents like the Courier reader who regularly paints Arbutus Corridor electrical boxes.

Posted by Michael Geller at 7:22 AM No comments: