Richard Henriquez's family originated in Portugal but some family members lived in Morocco. So before setting off on this trip it was decided that we would try and seek out Jewish quarters and cemeteries in Marrakech,  Essaouira,  Fes and Tangier. Since most of the Jewish population has now left Morocco, the facilities we found were in varying states of disrepair; but we were grateful to those who volunteered to open up the synagogues and cemeteries for us. (In return for our contributions!)

I should add that while this is a Moslem country, at no time did we feel uncomfortable telling people we were Jewish or asking directions for Jewish places. It seems that the Moslems and Jews lived in relative harmony in Morocco for many centuries, although with the exception of Essaouira, they tended to concentrate in a part of the city known as the Mellah http://en.wikipedia.org/wiki/Mellah 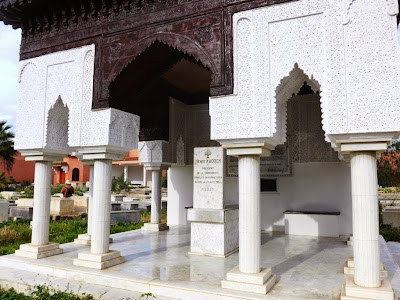 The cemetery in Marrakech was difficult to find and in the greatest state of disrepair. But then, the first graves we saw, marked by small barrel shaped vaults, were those of children who had died of the plague many centuries ago. We were shown around by three men, one of whom told us his family looked after the cemetery, just as their family had done beforehand.
It was fascinating to see the variety of stones and read the names of families, many of which Richard knew. The Jews started to leave Morocco after it gained independence from France in independence, but left in large numbers in the 1960s and 1970s. 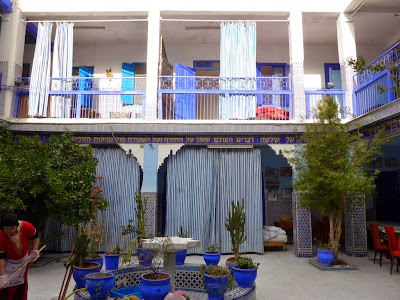 After seeing the cemetery we found a small synagogue in a maze of dirty stinking streets in what could only be described as a very run down part of town. It was hard to imagine how people lived in these dark, dirty homes. 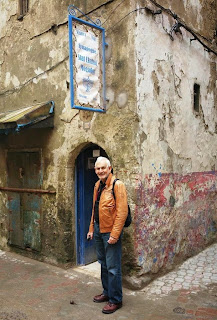 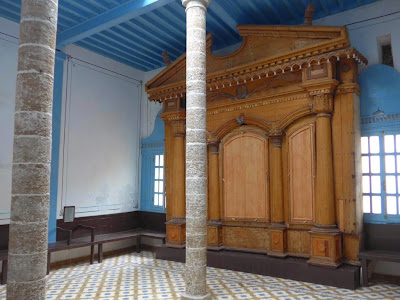 In Essaouira, whose colours are white and blue, not red like Marrakech, we found two synagogues in disrepair.  At the  Synagogue we met a woman who turned out to be a German lady who had moved from Paris and had known a relative of the rabbi. She told us that at one time Essaouira was a predominantly Jewish community with 10,000 Jews and 3,000 Moslems. It was known as Mogador. The community had disappeared although some American Jews had started a renovation project to restore the synagogue. It included duplicating the original floor tiles. 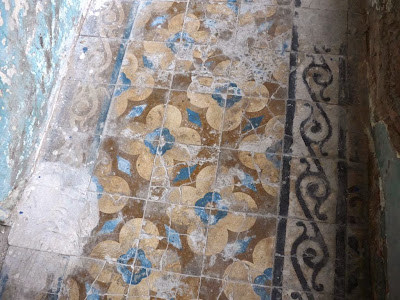 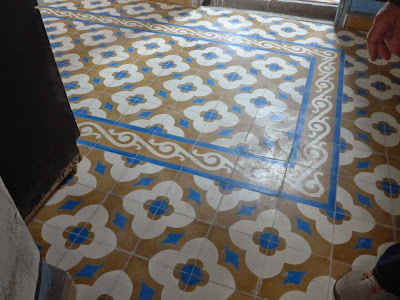 She enjoyed volunteering by showing us around and felt it had been a very good day since she sold us two books on the history of Essaouira' Jewish community and received some additional donations! 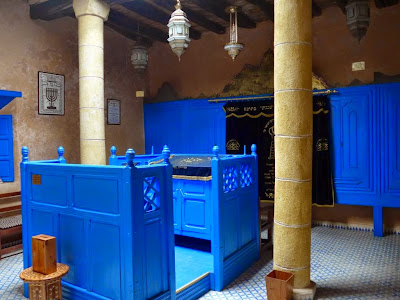 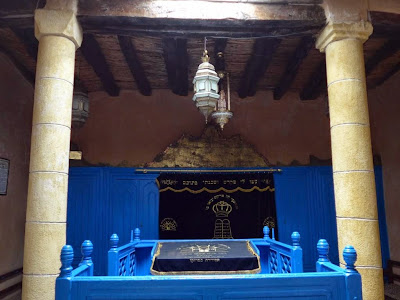 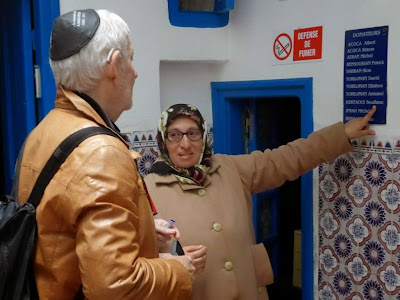 We then came upon the Pinto synagogue. Here another amazing lady showed us around.  I wondered if she was Jewish but she told us she was a Moslem. She also showed us how Christians, Moslems and Jews had all contributed to the maintenance of the synagogue. We heard a similar message in Fes.
We found the walled Jewish cemetery but we're unable to get in. 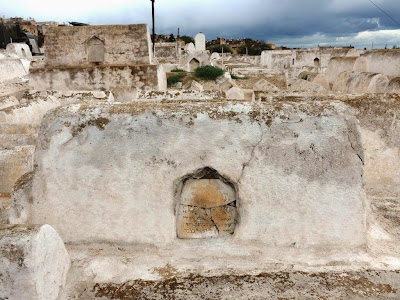 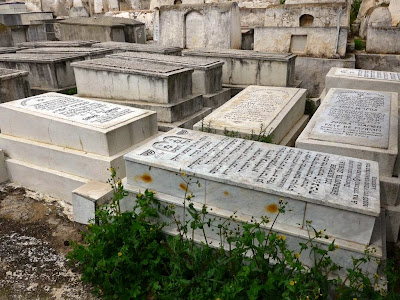 In Fes we came across the once bustling Jewish quarter now a hive of shops, especially jewelry shops, many of which were no doubt started by Jews. The nearby cemetery was well maintained with different forms of memorial stones. The inscriptions were in Hebrew and French.

The nearby synagogue was still in use for high holidays although we think we were told there are only 50 families left. (All of these conversations were in French, and I didn't always understand everything I was being told.) There was also a museum but it was closed until 3pm. Unfortunately by the time it was opened, we were too wet and exhausted from our visit through the souk and didn't get back. 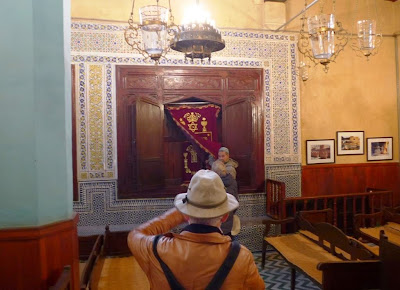 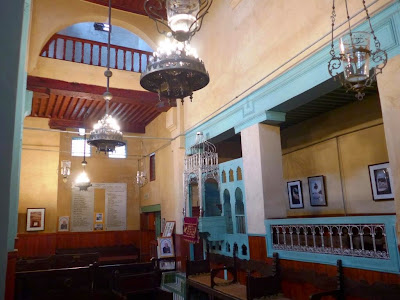 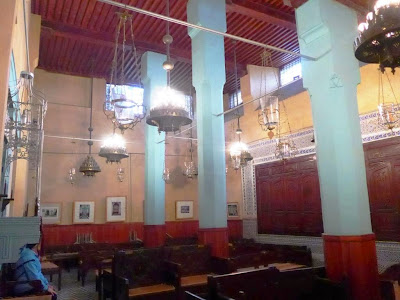 In Tangier we were taken by Momo, our guide for the day, to the synagogue which was under renovation. It was easy to find....it was on Rue Sinaguogue. It was quite impressive with many candelabras, and other Jewish artifacts that Carol noticed appeared to have been donated by families from around the world who had no doubt left Morocco. 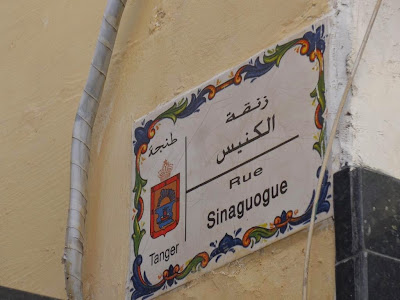 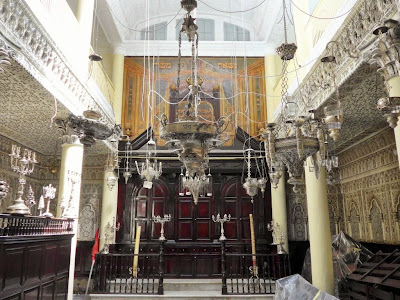 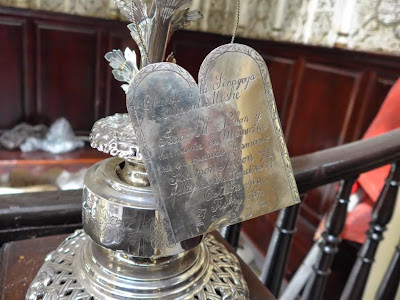 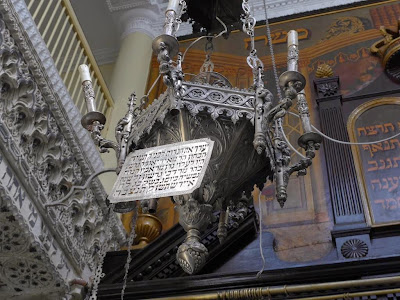 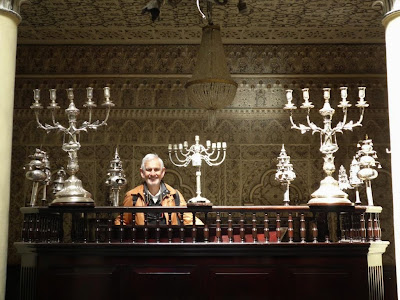 We also found the cemetery and I was surprised to discover that here the stones were carved in Hebrew and Portuguese/Spanish, but not in French. 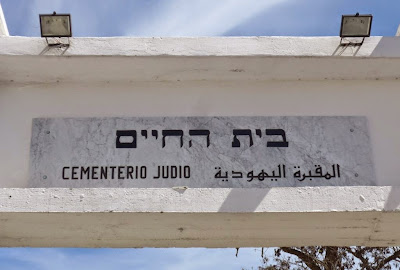 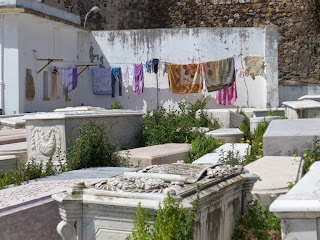 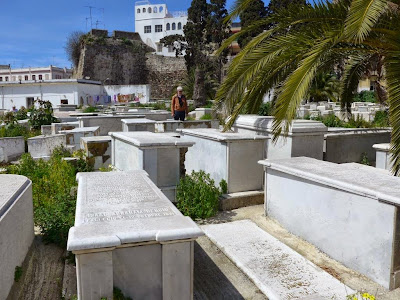 I must say that travelling with Richard Henriquez, who has devoted considerable time to studying his family's genealogy added a dimension to our trip that I hadn't fully anticipated. The experiences (and photos) will certainly become a new chapter in my Yiddishkeit Around the World lectures!
Posted by Michael Geller at 9:09 PM

Great photos. I like them very much. Thanks for sharing such photos.
Find deals with hotels