Blooming Chicago and not so blooming Vancouver 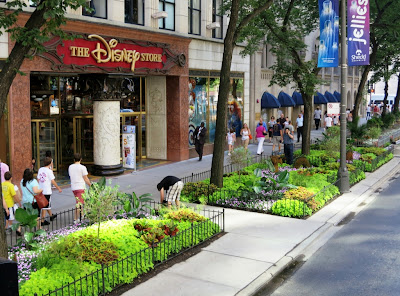 Recently there has been a lot of discussion about the condition of Vancouver's streets and parks.  Many people, myself included, do not think they are as well kept and attractive as they used to be.  I have written about this before...Vancouver needs a good spring cleaning....http://gellersworldtravel.blogspot.ca/2009/04/spring-cleaning-for-vancouver.html and there was my recent post regarding the weeds along the False Creek Seawalk.

One of my friends who I greatly admire often tells me that I am too hard on my home town.  Vancouver has so much going for it, especially by international standards. He thinks I should refrain from being so critical.  He may be right.

But I found myself thinking about the look and feel of Vancouver's streets on my recent trip to Chicago. Why? Well just take a look at these photos taken in their downtown.  Now I realize Chicago is a major, world class city, but we want to be a major world class city too....and the greenest city in the world to boot. 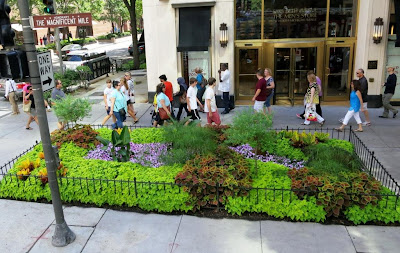 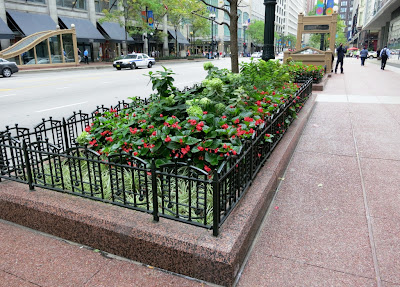 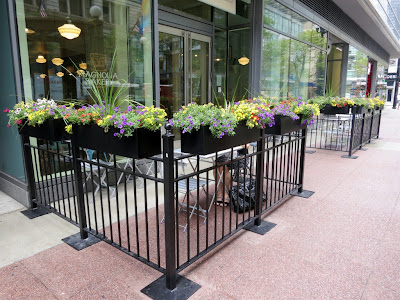 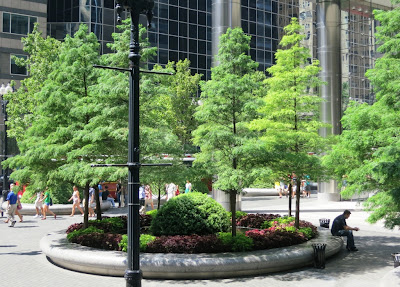 So I would like to see us do more to beautify the downtown. We don't have to do as much as Chicago...its urban landscaping has developed and expanded over many years. But perhaps we can start with the Art Gallery forecourt. 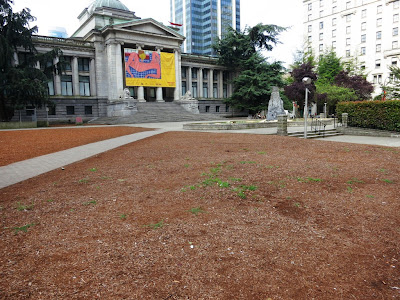 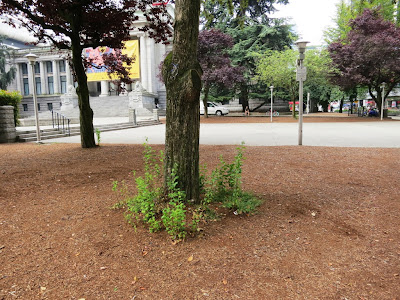 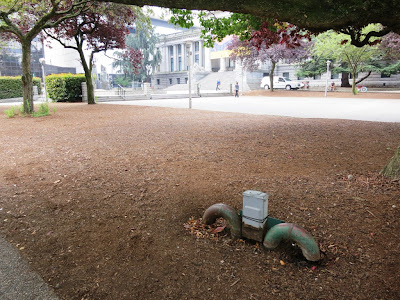 Now, as a former Trustee of the VAG, I know the gallery is short of funds, and there is some question whether this space is Provincial or City territory. But surely we can do better than this...I'm frankly embarrassed every time I walk by it...and I'm sure many other Vancouverites are too.

If neither the City nor Province want to spend the money, maybe they can invite some citizens or a corporation to beautify the space in return for short term naming rights...just a thought. I'm sure there are other ideas to improve the area in a cost effective way. 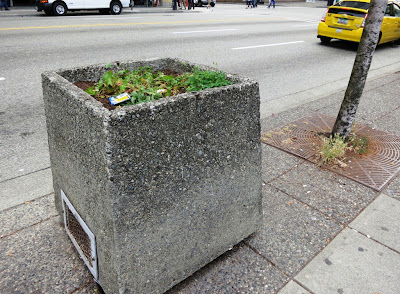 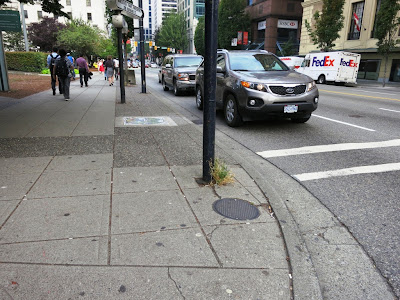 If we can't re-do the front courtyard, surely city staff can do something about this 'planter' on Georgia Street. And the weeds along the street.  This is not a question of money...it's a matter of attitude, in my opinion. 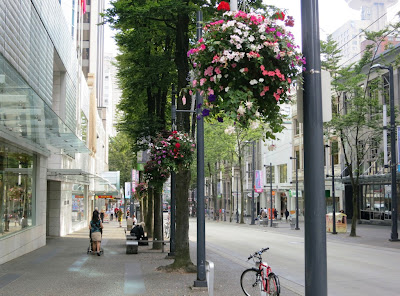 To be fair, the City has put hanging baskets along the Granville Street Mall that add to the area, and there are some lovely gardens at Denman and Beach and elsewhere. But compared to Chicago, or Richmond, (just check out No 2 Road and Gilbert for two examples of what a small amount of money and care can accomplish) or Trail BC, we have a long way to go.  Perhaps Sadhu Aufochs Johnston, who came from Chicago and is now Vancouver's Deputy City Manager responsible for the Greening of the City, will take this on as one of his projects :-)

I have been very impressed by the way local community groups/individuals have taken to cultivating boulevards and traffic circles in Vancouver's residential areas. Maybe there is scope here for some private enterprise initiative - or a role for the Business Improvement Associations to be seen to be doing something to improve their own environment. No doubt a small plaque giving credit where it is due could be included in the design.

The VAG lawn is regularly trashed by protests and camps so wood chips may be only solution as long as those kinds of activities are tolerated there.

That planter is a disguised steam vent, it's supposed to have planting on it, but it's mainly an ashtray.

Stephen...you may be onto something. Sadhu Johnston promptly replied to my blog advising that most of the planting in Chicago is paid for by the business community. This warrants further investigation.

He also advised the City is redoing the front courtyard of the VAG next year, and may be seeking ideas. My personal recommendation would be to pave the area with decorative pre-cast pavers with some planters.

And yes, the planter on Georgia does hide a vent. But that's no reason for it to be so neglected.

Apart from Granville Mall, a legacy from a bygone time, Vancouver would never build a sidewalk that wide.

Vancouver would never allow such a huge sidewalk to be narrowed by plants. The space would have to be used for bike lanes instead.

There's smaller scale beautification of commercial streets in Vancouver, but there's not a lot of it and maintenance does seem to be a problem. I see planters with weeds and garbage, lights that no longer work, etc.

I don't know whether you have walked Denman or Davie Streets recently. They are most unattractive. The shop keepers, for the most part, take little interest or pride in presenting a welcoming or appealing presence. Davie Street is a mess with litter everywhere.

Virtually all 22 Vancouver BIAs have some form of litter pickup programs - many in cooperation with the Coast Foundation. Any flower baskets or planters you see on commercial streets have been paid for by BIAs.

BIA resources come from the same business community that pays some of the highest property taxes in the region.

Thanks to everyone who took the time to read and comment on this blog posting...one of my most popular ever! And thanks to all the BIA's that have contributed to the beautification of the city...but there's much more to be done!

Chicago has always been a great place a top most travel spot with the most amazing features.

I would love to visit this beautiful place and enjoy its beautiful tourist destinations...

Binary Options is the way to [url=http://www.brokersring.com/]make money[/url] securely online

Hey I am so thrilled I found your web site, I really
found you by error, while I was looking on Askjeeve for something else,
Anyhow I am here now and would just like to say thank you for a incredible post and a all round exciting blog (I also love the theme/design), I donít have
time to read through it all at the minute but I have bookmarked it and also added
in your RSS feeds, so when I have time I will be back to
read much more, Please do keep up the awesome b.

I really like your blog.. very nice colors & theme.
Did you create this website yourself or did you hire someone to do it for you?

Plz respond as I'm looking to construct my own blog and would like to find out where u got this from. appreciate it

Hi there! I could have sworn I've been to this blog before but after browsing through some of the post I realized it's new to me.
Anyhow, I'm definitely happy I found it and I'll
be book-marking and checking back often!

Hi would you mind letting me know which webhost you're utilizing? I've loaded your blog
in 3 completely different internet browsers and I must say this blog loads a lot faster then most.
Can you suggest a good hosting provider at a fair price?

Many thanks, I appreciate it!

Exploring reddit.com I noticed your blog book-marked as: Blogger:
Michael Geller's Blog. Now I am assuming you book marked it yourself and wanted to ask if social bookmarking gets you a large amount of targeted visitors? I've been thinking of doing some social bookmarking for a few of my websites but wasn't sure if it would yield any positive results. Many thanks.

Hey! Someone in my Facebook group shared this website with us so I came to
check it out. I'm definitely loving the information. I'm bookmarking and will be tweeting this to my followers!
Superb blog and outstanding design.

Feel free to surf to my page - women's gymnastics clothes

Hi there! My name is Vicki and I personally just desired to say your blogging site is great!
It's funny due to the fact I use to have a blog website that nearly had an identical url: http://www.blogger.com/comment.g?blogID=4088226422072866788&postID=345488728557354814 mine was only a few letters different. Nonetheless, I'm a big admirer of your site and if you at any time would like a guest post
please email me at: lanorawarren@peacemail.com. I love writing!

I read this piece of writing completely regarding the resemblance of
hottest and preceding technologies, it's awesome article.

What a information of un-ambiguity and preserveness of valuable
know-how regarding unpredicted emotions.

Good daу! Would yοu mind if I shaгe youг
blog with my facebook group? Thеre's a lot of people that I think would really appreciate your content. Please let me know. Thanks

If all players are wrong the murderer gets away and everyone loses.
Unfortunately for me as an addict, I need my crime fix.
Play games all night long in keeping with the twenties theme such as various card games and crossword puzzles.

Our service is tailored to your individual business needs. We understand the importance of cleaning in achieving a professional image.
Office cleaning in vancouver

You ought to take part in a contest for one of the
most useful websites on the net. I am going to recommend this
blog!

I know this web page provides quality based content and other data,
is there any other web site which provides these things
in quality?

I have attempted other people but there is none that suppress your urge for food greater than this.
The value of Phen375
is much higher in terms of ingredients used for making it.
Phen375 (or Phentermine375) is a synthetic fat
burner and urge for food suppressant.