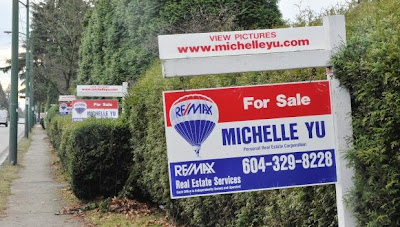 Last week, I had lunch with Faaiza Lalji, an Urban Planning and Real Estate Development Student at Harvard University's Graduate School of Design. I always enjoy chatting with Faaiza because as anyone who knows her can attest, she's a remarkably bright and inquisitive person who one day will be a major participant in the Vancouver real estate scene.

Over lunch Faaiza and I were discussing various new projects around the region and the subject of Granville Street came up. Not the downtown portion, but the area south of 41st where a parade of 'For Sale' signs has recently sprouted up. "What do you think should happen there?" she asked.

Rather than spend our remaining minutes focussing on this one topic, I promised to post my thoughts on my blog. So here they are!

For decades I have argued that Vancouver's arterial roads should be rezoned and redeveloped with higher density forms of housing. As some readers know, I have twice put my money where my mouth is, resulting in the redevelopment of Oak Street between West 42 and West 43 and West 41st between Balaclava and Carnarvon Streets. 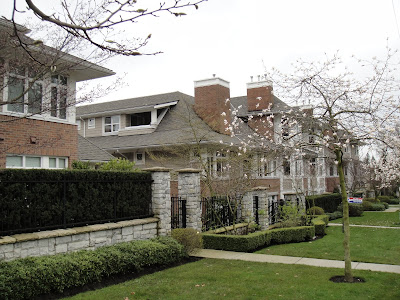 It has been gratifying to see a couple of new projects follow suit, although I can't say the same for the redevelopment on Oak Street immediately south of Oak Gardens, which to my mind is an awful development that should never have been approved by the City. My biggest concern with this project is its relationship to the street and the almost complete absence of vegetation between the buildings and the curb. (Why no oak trees along Oak Street?) 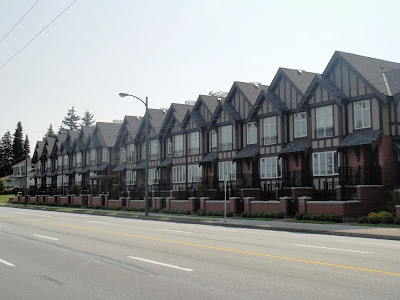 This brings me to Granville Street. I cannot forget the visitor who once commented to me how exceptional he thought it was driving into Vancouver along Granville Street. What stuck him was the lush green lawns and hedges lining the street, especially in Februrary when the rest of Canada was white. He noted that the vistas along Granville were so very different from what what one usually found driving from the airport into the downtown of most other major cities. 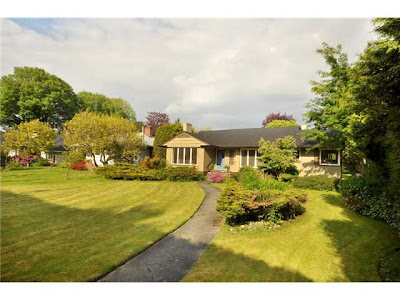 Recently there have been a couple of redevelopments along Granville. Granville Mews south of West 49th is currently under construction and replaces three single family homes on large lots with two rows of townhouses. Designed by Formwerks, the architectural firm I am working with in West Vancouver, the units have a traditional look and would not be out of place in nearby Shaughnessey. Most people are not even aware of this development that is offering a housing choice generally not found in the area. And there seems to be a strong demand with prices starting above $1million and good sales activity.

Nearby, Wall Financial recently received Council approval for what will be a very significant redevelopment of Shannon Mews. The Arthur Erickson townhouses will be replaced by a variety of apartment buildings, some of which are well above the three storey height of surrounding buildings. While I have seen the plans, I will wait to see how this will look. To my mind, the key will be to maintain the trees along the street, and to add new vegetation along the perimeter of the development.

Last year, at 49th and Granville, NSDA Architects received approval for a three or four storey seniors complex. I have worked with this firm on many occasions and will watch with interest to see how their development will transform the property owned by Ben Wosk for many decades. My hope is that the greenery at this major intersection will either be maintained or replaced.

At 16th and Granville another controversial project is currently under construction. Also designed by Formwerks, I think we have to wait until it's finished before casting final judgement. However, there is no doubt that much of the greenery that used to be at this important intersection has disappeared and we can only hope that new trees will be planted so that the building edge is not as severe as it appears today.

And this brings me to how I feel about the rest of the street. I still believe that many of the single family properties along Granville Street south of Shaughnessey should be redeveloped over time. But rather than continue with ad-hoc spot rezonings, I would like to see the city put in place a comprehensive plan and design guidelines that provide for variety along the street including semi-detached/duplex units, street row housing, and some low-rise apartments in appropriate locations.

However, whatever the building form, I think it is important that the sense of greenery be maintained. This might be accomplished through a greater landscaped setback than generally required, and specifically guidelines mandating a double row of trees, lawns and extensive planted areas, etc.

In this way we might increase the density along this well serviced transit arterial, while maintaining the 'green aesthetic' that both visitors and residents have come to appreciate along the street.

That Faaiza, is what I'm currently thinking. Now I'd like to hear from you and others....knowing that it will likely be a while before the City gets around to rezoning this important city street.
Posted by Michael Geller at 6:12 PM

Interesting, though redeveloping these thoroughfares as you suggest will not add significant supply relative to the city at large. The overwhelming majority of dwellings are off major streets, obviously.

The development on Oak that you dislike so much is reminiscent of older cities where row houses open directly onto the street and any vegetation exists out back. I only know the development from driving by, but I suspect there's a second row of dwellings behind the first leaving no room whatsoever for green. While that provides maximum density it hardens the environment both literally and figuratively. People need vegetation for both physical and mental health and a rainy city needs porous ground to absorb moisture.

I agree with you that the city needs to open up these new developments a bit by requiring permeable surfaces, preferably filled with trees/shrubs/flowers/grass.

Ever since you spoke of your frustration with "spot rezoning" it is gaining relevance for me. I was reading France Bula's blog about the problem with lights on BC Place Stadium being a problem for nearby condo dwellers, and also the art gallery is becoming a question around a cultural precinct downtown. It seems that larger scale planning than what is being practiced today has potential for better planning solutions, such as better higher density solutions that you advocate for streets like Granville and Oak.

Thanks for your comments...David, you are right about the building form...however, look at the Carrington Mews development further to the south...it has two rows of units AND some greenery!

Interesting to see an article about my 'hood. Couldn't agree more about the "ugly" development on Oak. It manages to avoid greenery completely. Similar developments b/w 45/46 on Oak, b/w 45/49 on Ash do the two-row townhouse much better. I'm looking forward to see what happens on Granville where those for sale signs you spoke of were. Seems to be two big chunks on the market right now.

I'd like to see some street-front retail activity near the major intersections (41, 49, 57) since Granville S of 41st is basically a dead zone until Marpole. Pedestrian activity would help slow traffic speeds to a more urban pace, since it functions as a bit of a highway right now with few traffic lights to get in the way.

It looks like there are some short trees/bushes in front of those rowhouses that have yet to fill out. It is likely that the underghound parkade prevents planting of larger trees. Plantings don't generally lend themselves to instant gratification (just look at the new saplings on Granville St. downtown).

One question - why are there no street trees in front of those rowhouses? Perhpas a letter to the City may fix that.

Talk about an intersection ripe for development, try 41st at Knight. I hope the City planners put into practice lessons learned(?) from Granville St. What seems to be lacking is an overall, big picture plan for our City.