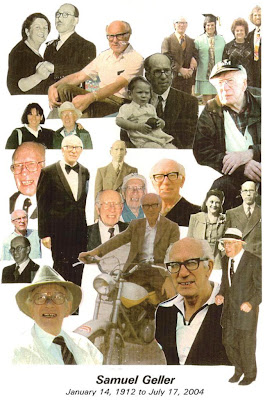 Today would have been my father's 100th birthday. Given that he was in very good health at his 90th birthday party at the Richmond Golf and Country Club, I often thought he would make it to 100, and we looked forward to celebrating on this day. Sadly, there will not be a party, but a day of rememberance and recollection.

It was perhaps unrealistic to expect my dad to live to 100 since he was lucky to make it to 40! Born in England, he enlisted in the Kings Royal Rifle Corps as World War II began. After some exciting times in North Africa, he was relocated to Europe and after many close calls, taken prisoner in Italy from where he was transported to Germany. As a Jew he was lucky to survive in a German prisoner of war camp. But he did.

Everyone who knew my dad liked him. It was hard not to. A very gentle man with a great sense of humour, he was interested in everyone and everything. Although he always wanted to be a journalist, for many years he was a barber to the lawyers and judges who frequented the Osgoode Barber Shop, across from Osgoode Hall in Toronto. However, he eventually pursued his true passion....books....by selling his business and taking a low level position in the Scott Library at York University. Over time, he advanced through the library system and eventually was put in charge of the periodical section. This allowed him to read and enjoy French and German magazines in a much safer environment than in previous years.

After formally retiring at 65, he was asked to return to the Library where he worked until he and my mother moved to Vancouver in the mid 80's. They lived in Langara Gardens where he could swim everyday and enjoy a very comfortable life with his friends and family.

After my mother died in 1992, his life changed quite significantly. He and his best friend, another widower named Nat Cannon enjoyed the symphony and theatre and were active in a variety of Jewish community organizations and events. But sadly, many of his friends died and he was often off to funerals.

This prompted my daughter to ask him one day..."Grandpa, why are you always going to funerals?" "Georgia", he replied. "If you don't go to theirs, they won't come to yours!"

When I finished building Oak Gardens at 42nd and Oak, I suggested that he check it out. He had no interest in leaving Langara Gardens but he liked one of the ground floor one bedroom and den suites with a west facing patio. Over lunch at Kaplans delicatessan he decided that perhaps he should move, since he could walk to Louis Brier where he volunteered and the Jewish Community Centre where he partook in various activities and spent time in the library.

Moving into Oak Gardens changed my dad's life, since he was often the only unattached man in a building with about 30 unattached women! He soon learned bridge and other card games and was never lonely. He put on a lot of weight!

When he turned 90 we had a big celebration. My dad was a keen follower of municipal politics and one of his favourite politicians was Philip Owen. He was therefore quite delighted when the Mayor showed up at his party and presented him with a signed book on the history of Vancouver. When my dad protested that there were not to be any presents, the Mayor assured him this wasn't a present.

All of my dad's friends from Oak Gardens were there and some were quite astonished to see the Mayor. "Sam", one of them said. "Is that the Mayor? What would he be doing here?"

Two years later he had a fall, and that was the beginning of the end. Concerned that he was no longer capable of living on his own, my sister and wife urged him to move to the Weinberg Residence, an assisted living facility next to the Louis Brier Home and Hospital. He didn't want to move, but agreed to try it out for a month or so, while keeping his apartment.

Sadly, he died two weeks after moving in from a sudden heart attack. At the time, Sally and I were at a wedding in Alberta and it was a very difficult trip back. As is the Jewish tradition, the funeral took place a day later. It was followed by a reception at Oak Gardens.

In going through his apartment after his death, we understood why he might have died so quickly. There in a bedroom drawer were hundreds of pills that he was supposed to take, but hadn't. At the Weinberg Residence he was being too well looked after. They made sure he took all his pills!

The administration was very sad to lose such a very easy going resident, especially since I had been very involved in the development of the building and served on the Board.

A year after his death, the unveiling of his headstone took place. On it was written in memory of Sam Geller, a husband, father, brother, and grandfather. A true gentleman.

Last November, his friend Nat Cannon turned 100. He and his family celebrated at the Weinberg Residence where he now lives.

Dad, I'm sorry you're not around to celebrate your 100th birthday today. We would have bought you an IPad!
Posted by Michael Geller at 3:09 PM

The Thought of The Day

"My greatest epiphany I had, after I lost someone close, was that... life goes on!"

An IPad for your father 100s birthday? You are still a good son, Michael!

A beautiful post for your father. He would be very proud of you. I wasn't able to catch your eye at the UDI lunch today, but wish you a very happy 2012.