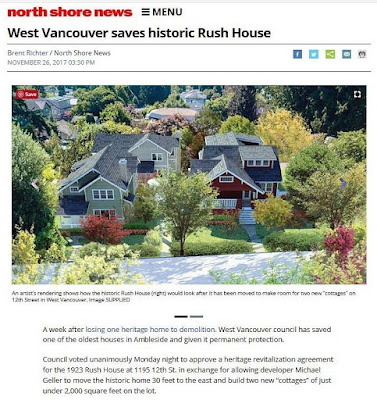 A week after losing one heritage home to demolition, West Vancouver council has saved one of the oldest houses in Ambleside and given it permanent protection.
Council voted unanimously Monday night to approve a heritage revitalization agreement for the 1923 Rush House at 1195 12th St. in exchange for allowing developer Michael Geller to move the historic home 30 feet to the east and build two new “cottages” of just under 2,000 square feet on the lot.
The home was built by Maj. Frederick Rush, a First World War veteran who developed the lot into a 0.73-hectare farm following the war.
The project has the endorsement of the North Shore Heritage Preservation Society.
“It is a very attractive Craftsman-style house with many of the classic architectural features of this architectural design,” society president Peter Miller wrote in his letter to council on the matter. “Its retention will serve to remind today’s residents of the rural character of the West Vancouver community when it was built and stood amongst field from which hay was harvested.”
Some neighbours, however, had some concerns. Particularly Holly Kemp whose backyard could wind up in eyeshot of her new neighbours’ windows.
“Now we all want the Rush house to be saved. That’s not the question. But it should not be at the expense and hardship of long-term West Vancouver residents and neighbours like myself and my family. Developers should not be allowed to infringe on my property rights, devaluing my property and destroying my little piece of heaven,” Kemp said at a public hearing Monday night.
Council’s reasons for supporting the project ranged from a love of the home itself to a desire for the smaller infill units the project would provide.
“I love the design. I think it replicates the neighbourhood form and character,” said Coun. Nora Gambioli, adding that she has faith in Geller to address neighbours’ concerns. “Our job is do what’s best for the community as a whole and what’s best for the community as a whole is to save this heritage property.”
Coun. Mary-Ann Booth threw her vote behind the project largely because of the two cottages being added to the lot.
“I’ve said it before. I’m not interested in supporting any more single-family subdivisions because that’s not what 80 to 90 per cent of the community wants,” she said. “No locals can afford $5 million to $6 million houses here anymore.”
Coun. Christine Cassidy said she shared some of the neighbours concerns but supported the project for the home’s sake.“It is a house which grabs your heart and I definitely do want to see it preserved. I do think it will be a lovely project when it has finished,” she said. Mayor Michael Smith also voted in favour but not before sharing his concern that Geller’s new units were perhaps too big and that there wasn’t any rental accommodation in the plan.

Posted by Michael Geller at 1:13 PM