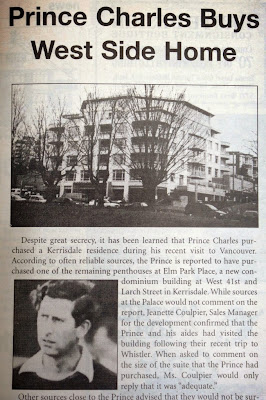 In 1998, I completed the development of Elm Park Place at the corner of West 41st and Larch Street. I often advertised the project in the Courier and, when I realized there would be an April 1 edition, I decided to have some fun. It was shortly after Prince Charles had visited the city. Instead of a conventional advertisement, I wrote an “advertorial” reporting that “according to often reliable sources, during his recent visit to Vancouver, the Prince had purchased a residence in Kerrisdale.
While the Palace would not comment, the purchase was rumoured to be one of the remaining penthouses at Elm Park Place.”

What I had not anticipated was the response from some pre-sale buyers who called my office as soon as their paper was delivered. How dare I sell to the royal couple without consulting with them? Imagine the security costs they were are now going to have to pay! 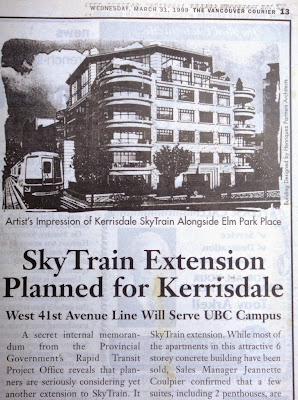 The following year I still had a few suites left. The RAV Rapid Transit along Cambie Street was very much in the news and this prompted another advertorial in the March 31 edition. It reported that the government was secretly planning a SkyTrain extension to UBC along West 41st Avenue and included an artist’s illustration of the SkyTrain running past Elm Park Place. The next day my youngest daughter came home from Crofton House School with a big smile on her face. “You’ll never guess what, Daddy,” she exclaimed. One of her new classmates, whose family had recently arrived from Hong Kong, brought a copy of the Courier to her classroom “show and tell” to let everyone know there would soon be SkyTrain to Crofton House School. My daughter tried to explain it was really her dad’s April Fool's Day joke, but the girl had never heard of April Fool's Day.

This year there will be no pranks. However, I am presenting a talk at SFU Wednesday evening on the theme “12 Great Ideas for Vancouver from Around the World.” Here is a preview:
Wednesday's talk is at SFU Harbour Centre 515 West Hastings St. from 7 until 9. You can register at sfu.ca or take a chance and just come by. Of course, it is free. No fooling.

- See more at: http://www.vancourier.com/opinion/columnists/vancouver-can-learn-from-other-major-cities-1.1810161#sthash.nOF75DhG.dpuf
Posted by Michael Geller at 3:24 PM