Sochi 2014: Facilities in the Imeretin Valley on the Black Sea 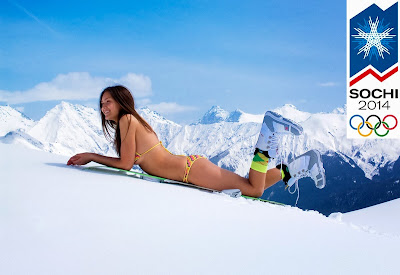 When I first learned of the opportunity to serve as a juror for the Moscow International Financial Centre project, I immediately thought I would have to visit Sochi, the site of the 2014 Olympics.

While I am by no means a sports fanatic, since I lived in Vancouver during the 2010 games, I was very interested in seeing how the Russian facilities and overall set up would compare. I was particularly keen to see how the Russians planned to create their Athletes' Villages!

While I knew it would be best to visit after our January session just before the games began, a quick on-line investigation confirmed my expectation that the good hotels were fully booked. So I decided to go after our first jury session on November 5 and 6.

Knowing just how tight security was around the Vancouver games, I wasn’t sure just how much of the site I would actually get to see. But it didn’t really matter. I thought if I could get a feel for Sochi and the surrounding areas, it would be sufficient.

However, my expectations changed when I got off the plane in Moscow only to discover that Sberbank, the bank behind the IFC project, was also the lead sponsor for the games. Moreover, at our jury session at the Sberbank offices, I learned that one of my fellow judges, Deputy Chairman of the Board Stanislav Kuznetsov was the man overseeing all of the bank's construction activities at Krasnaya Polyana, the mountain resort town where all the skiing events are to take place. (Equivalent to Whistler at the 2010 Games.)

During the first coffee break I mentioned to Mr. Kuznetsov I had planned to go to Sochi after our meetings. He insisted that I contact him when I arrived there so that he could show me around. Little did I know what was in store.

Before my trip to Russia, I had a hard time understanding the layout of Sochi and the Olympics facilities. According to Wikipedia, Sochi, with a population of about 345,000, occupies a very large area. It is considered the longest city in Europe at 145 km from north to south. Bordering on the Black Sea, it has a subtropical climate.

Sochi proper is a very elegant resort with a population of about 140,000 and a long waterfront promenade. However, the new Olympic Park is not in Sochi proper, but rather near Adler, a part of greater Sochi. As a Trustee of The Adler School of Professional Psychology, I knew I had to stay in Adler.www.adler.edu

Sochi and Adler are linked by a very congested road that runs along the waterfront. However, according to Wikipedia, the coming Olympics has resulted in the construction of a medium capacity rapid transit system, the Sochi Light Metro. The current alignment would connect the Sochi Olympic Village, Sochi International Airport, two major railway stations of Northern Caucasus Railway, the downtown of Sochi, and the Alpine skiing area Krasnaya Polyana.

While there were many different hotels and guest houses to choose from in Sochi, Adler and Krasnaya, I determined that the Radisson Blu, the main hotel attached to the Congress Centre near Adler would likely be the best place to stay, especially since it was ranked no 1 of 35 hotels in Adler on TripAdvisor. It ultimately turned out to be an excellent choice. 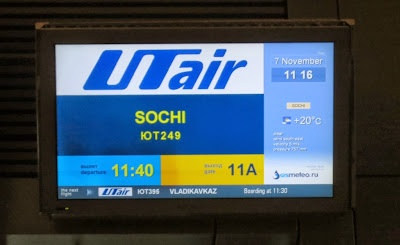 At the airport in Moscow (NOTE: there are 3 airports in Moscow) I was surprised to see the temperature in Sochi was 20 degrees. The flight took about 2 hours and was quite affordable. My last minute ticket going was $184 Cdn the return was $135. A number of airlines offer service, but they fly from the three different airports. If you are making connections, you should make sure you book from the right airport.

As I prepared to land in Sochi I could see a lot of waterfront hotels and apartments and what definitely looked like Olympic facilities. 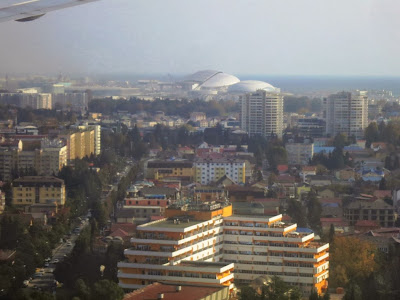 My first impressions were not positive. 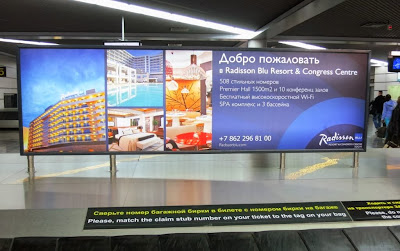 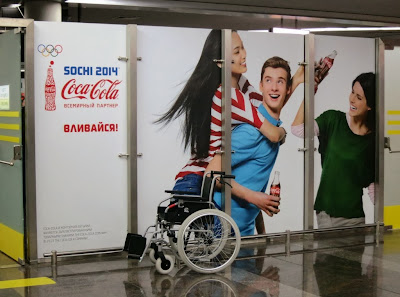 While I was happy to see the hotel and Coca~Coal signage, I could not find any information at the airport. The hotel shuttle was not yet in operation and arriving at the hotel I realized I had probably been overcharged by the official taxi service at the airport.(1000 R about $35 for a 7 minute ride).  I was unable to get any maps or Olympic facilities in English and the hotel seemed surrounded by construction activity. 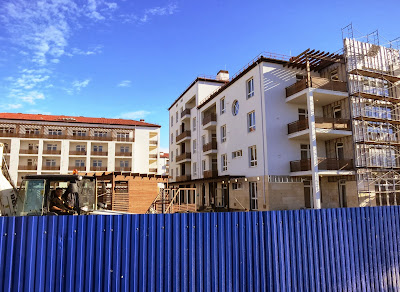 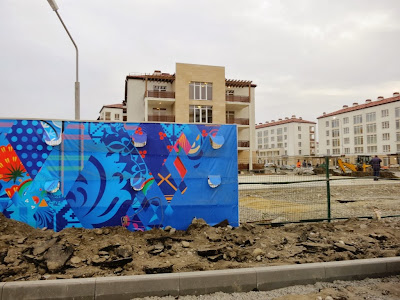 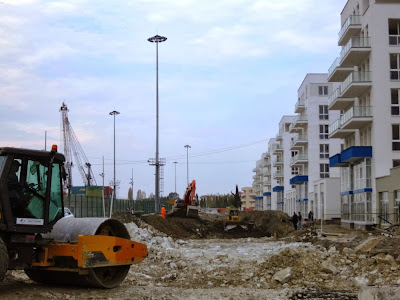 Wherever I walked I was blocked by security gates and fences. Not wanting to take any chances, I eventually decided to return to my room and enjoy the 22 degree sunny weather and local beverages. 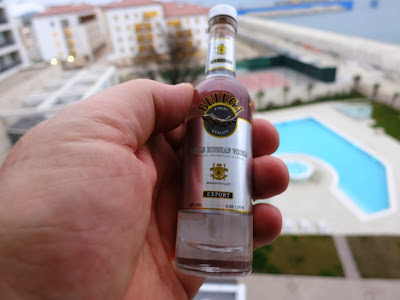 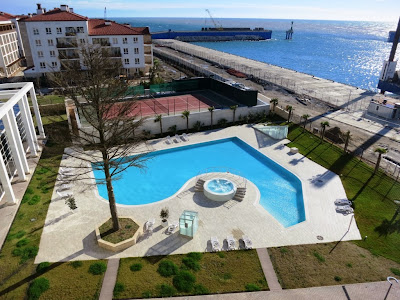 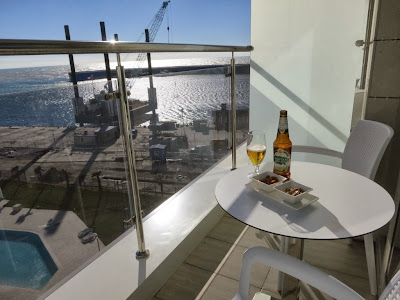 The next morning I was fortunate to meet Thomas Hagemann, General Manager & District Director at Radisson Blu Resort & Congress Centre. He had moved to Sochi to oversee construction of the hotel and Congress Centre as well as a number of other nearby hotels. When I told him why I was there and the difficulties I'd encountered, he was most gracious and helpful, taking me into the Congress Centre to see a large site model and advising me how to get to the waterfront walkway past all the construction activities.

I spent that day touring around the massive construction site. The scale of activity is unbelievable. Not only have all the facilities been built from scratch, but so has most of the infrastructure. There’s a new airport terminal, train station, new train line and new highway from Adler to the mountains. There’s an extensive new shoreline and walkway and it appears that just about every street in the general area is being rebuilt.
As I walked around, it seemed that far too many workers were just standing around, especially since there were only 90 days till the games began. I was overwhelmed by the scale of the undertaking and worried whether it would all be finished on time. While some facilities appeared finished, most were not.

However my fears were somewhat alleviated the next day when I learned more about how quickly the facilities have been built. Moreover, I learned that what I had seen that day along the Black Sea was just the tip of the iceberg. 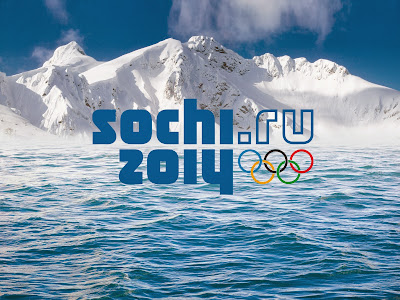 Posted by Michael Geller at 9:05 PM

Excellent photo report, thanks! Fascinating city to say the least, doesn't quite conform to what one would consider "Russian". I guess that's just me stereotyping though, you know - onion domes, heaps of snow and people in fur hats everywhere. Looks like they need to ramp some things up at any rate, it's drawing near.

Also, I'd like to add that there is no "ban on homosexual athletes" at all. The law/ban is a muddy piece of legislation however, but shouldn't affect the games in any way.

Find out who was born on any day in any month in history via our calendar of famous birthdays. Includes famous, historical, noteworthy and Celebrity birthdays.