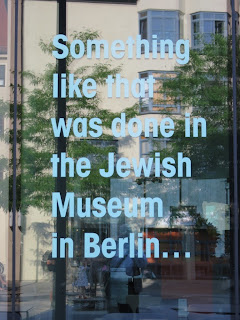 The museum is quite small, but prominently located in the centre of town. There were both permanent and temporary exhibitions. I was particularly fascinated by two, somewhat edgy exhibits. The first was created by an English woman who posted an ad in the personal column of a German newspaper to say she was a Jewish woman coming to Germany and wanted to talk to anyone about nothing in particular. 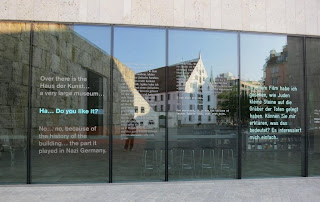 Some of her conversations are exhibited on the outside glass walls.

The second one is by a well-known Jewish American cartoonist (whose name I have forgotten) who was commissioned by the museum to create a series of comic strips. I suspect that many of my Jewish friends, especially the children of Holocaust survivors, can relate to this very well.

Posted by Michael Geller at 1:21 AM