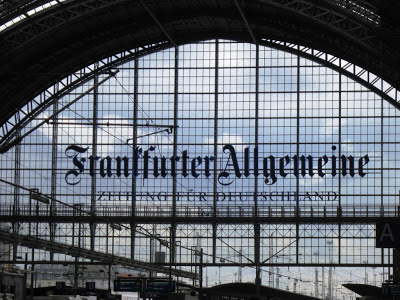 Frankfurt is one of the financial centres of the world; at least that's the impression I had before coming here as a result of regularly watching the evening TV news.  Whenever a European country is in trouble, it's Germany that seems to be expected to bail it out. The European Central Bank is based here and more substantial EU buildings are underway. 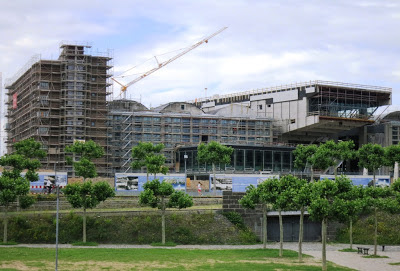 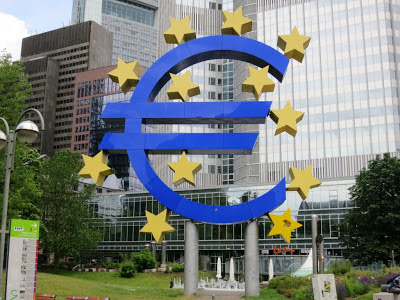 Sally was hoping to see some graphic illustrations of how Germany holds up Italy and Spain and Portugal and Greece, but so far no one has tampered with the EU logo to reflect this. 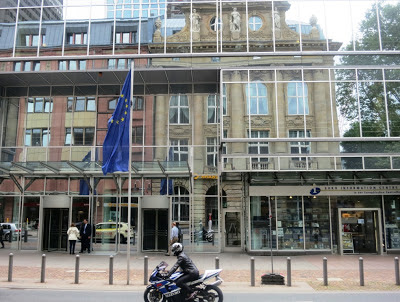 So here are a few images from around the city, in no particular order, illustrating things that I found of interest when I think of how we do things in Canada 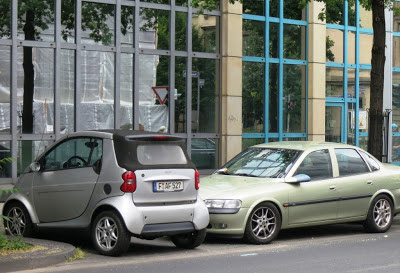 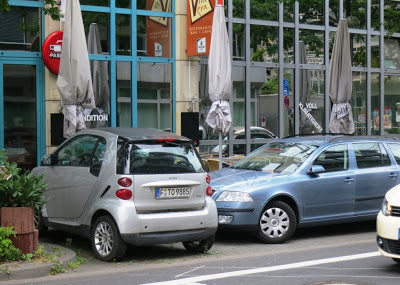 Europeans generally do not have traditional parking meters, and rightly so. They're costly, unsightly, and restrictive in terms of establishing the size of a parking space. So why does Vancouver continue to install such elaborate, expensive units along our downtown streets? 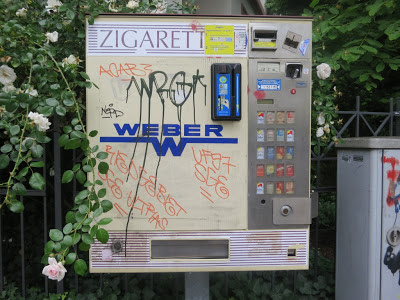 One thing Vancouver does well, compared to Frankfurt, is control graffiti and discourage smoking. My disgust with Frankfurt on these two counts was well illustrated by this. 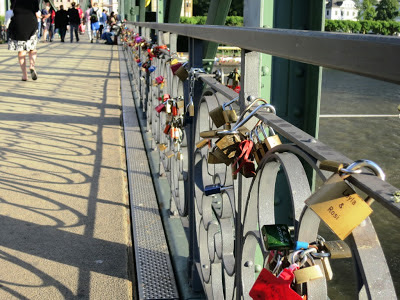 One of the many odd European traditions is for lovers to show their love by attaching a lock to a bridge. I saw this a lot in Spain and here is an example on a Frankfurt bridge. 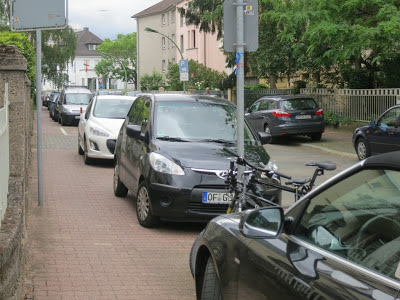 European cities were built before cars and so they have to go where they were not planned to be.  All over Europe cars take up pedestrian space, like here. 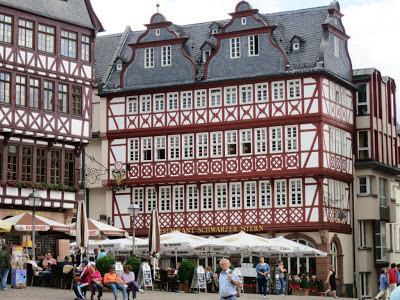 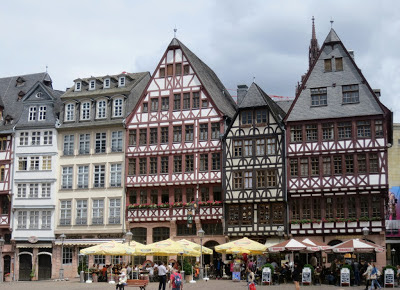 Frankfurt has some of the older gothic buildings that are so typical of Germany, but not many. Here are just a few in one of the old town squares. I'm sure we'll see a lot more as we travel around.

One of the things that intrigues me is the proliferation of advertising in European cities, and elsewhere around the world. I personally like the signs on top of buildings...should we be allowing more of this? Also, in the train station I was watching continuous illuminated advertising when this ad appeared....or is it an ad? 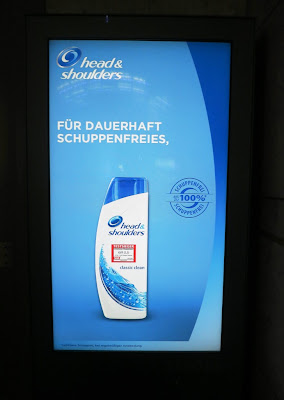 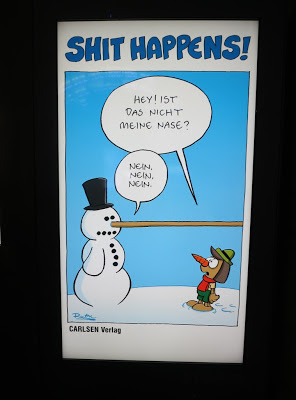 One of the things I wondered about before coming was the German attitude to Americans. I quickly found out when we discovered it was American Week in downtown Frankfurt. With blond girls in cowboy hats and what did they serve....frankfurters of course!  And coke.. 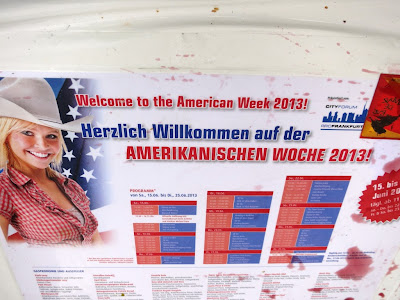 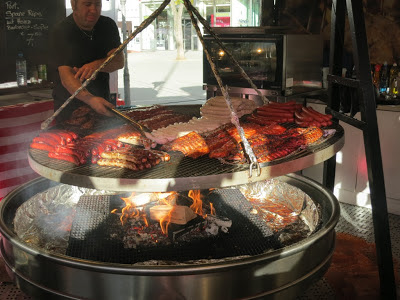 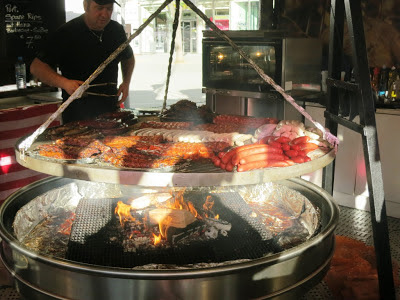 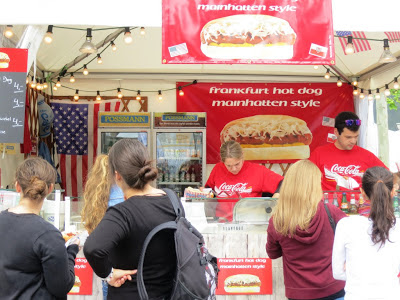 With the proliferation of high rise buildings, and location on the Main, Frankfurt fondly refers to itself as Mainhatten! 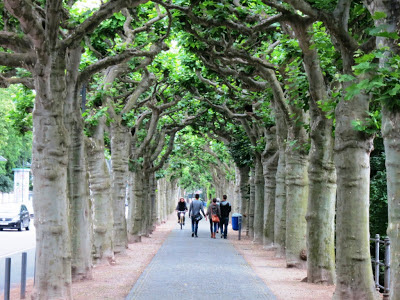 One of the things I like about European cities are the wonderful old street trees. I'm told these are plane trees...why don't we plant them in Vancouver...our climate is quite similar to Hamburg. 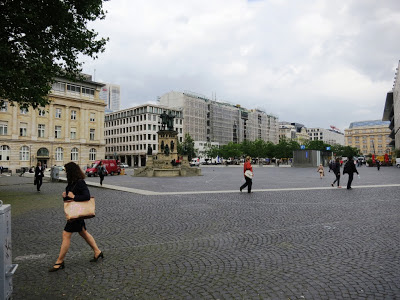 On the other hand, I don't really like these very large vacant plazas...while they might be great for displaying military might, and accommodating very large protests, they so often feel lonely places.

Finally, I found out that Chicago won the Stanley Cup on a TV screen in a Frankfurt storefront window! 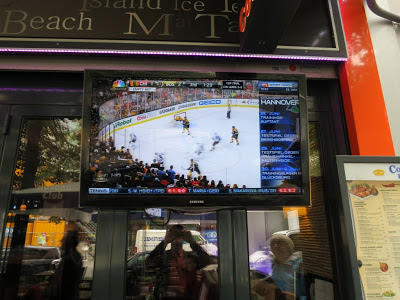 Posted by Michael Geller at 1:12 AM

Thanks for sharing the pictures, Michael. I will comment that I do like well designed, large public squares in Europe - London's Trafalgar, Siena's Campo, much of the centre of Paris. The square you picture does look pretty barren, as does Moscow's Red Square (from pictures, I've never been there). It depends on the design.