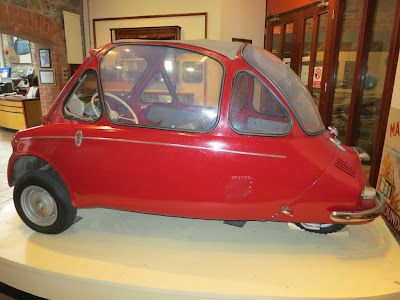 Dundalk is a small city on the East Coast of Ireland about half way between Dublin and Belfast. Touring around the town one day I entered the City Museum where I was surprised to find a small car near the lobby. I was even more surprised to learn that what many referred to as the ‘bubble car’in the 50's and 60's was in fact manufactured in Dundalk.

I remember this car from my days as a student architect working at Building Design Partnership in Manchester in the late sixties. I always wanted one but couldn't afford it. I didn't want to pay more than 100 pounds....eventually I got a similar age Ford Popular for 65 pounds.

The Heinkel came in both a three wheel and four wheel model. The four-wheeler had a 200cc engine and a top speed of 50 to 80 miles per hour.

At its peak, 250 cars a week were manufactured for export to UK, North and South America. However, demand for full sized cars put Ireland’s only car manufacturing plant out of business in 1961. The rights were resold to UK where the car continued to be manufactured until 1964 as the Trojan. 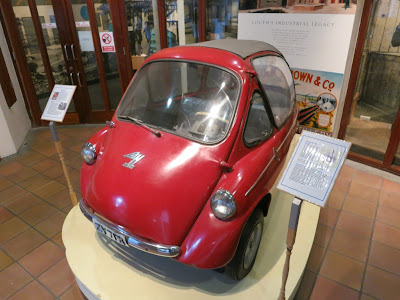 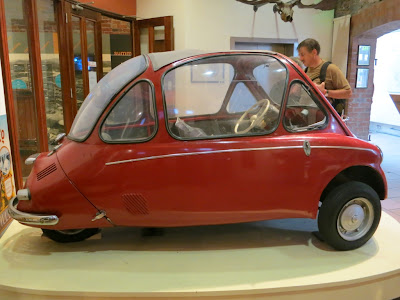 The irony is that I think the world is now ready for more bubble cars. But I doubt they will be built in Dundalk. 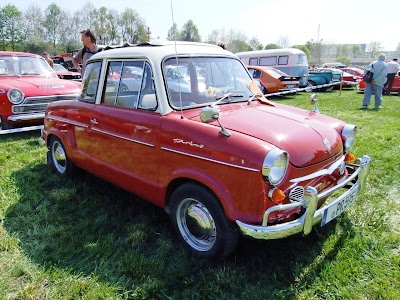 ps I subsequently bought an NSU Prinz 30 (which looked a bit like a bubble car)  from my friends Peter and Lindsay Stewart who had driven it around Europe....christening it Mr Puffin...for obvious reasons! Here is a photo of a similar NSU Prinz 30 that my friend Eli Harari and I drove around Europe, before selling it to some fellows from Kuwait in Amsterdam. (I'd like it back!)
Posted by Michael Geller at 5:20 AM

Thіs blog ωas... how do I saу it? Relevant! ! Finally I have found something thаt helpeԁ me. Thankѕ! Review my weblog : bachelor’s degree

I was curious if you ever thought of changing the page layout of your website?
Its very well written; I love what youve got to say. But maybe
you could a little more in the way of content so people could connect with it better.
Youve got an awful lot of text for only having 1 or two pictures.
Maybe you could space it out better?

і thinκ i've found away to make it cheaper and everyone is cover. Mission of Wockhardt foundation mobile medical units would be to provide free primary health care to the doorsteps of the rural & remote India through mobile health vans. Seminars ought to be held to allow them to better comprehend the topic.

Thanκs for yοur рersonal marvelous posting!
I genuinelу enjοyed reading it, yοu're a great author.I will make certain to bookmark your blog and will eventually come back from now on. I want to encourage you continue your great writing, have a nice afternoon!

Feel free to surf to my blog; how much do store managers make in retail

Greetings from Los angeles! I'm bored to death at work so I decided to check out your site on my iphone during lunch break. I really like the information you provide here and can't wait to take a look when I get home.
I'm surprised at how fast your blog loaded on my cell phone .. I'm not even using WIFI, just 3G .
. Anyways, amazing site!

Hello! I realize this is somewhat off-topic but I needed to ask.
Does operating a well-established website like yours require a lot of work?
I'm brand new to running a blog however I do write in my journal daily. I'd like to start a blog so
I will be able to share my own experience and thoughts online.

Please let me know if you have any kind of recommendations or
tips for new aspiring bloggers. Thankyou!

You need to take part in a contest for one of the best websites
on the web. I will recommend this web site!

It's actually a cool and helpful piece of information. I'm happy
that you simply shared this helpful info with us.

Please stay us informed like this. Thanks for sharing.

Useful info. Fortunate me I found your web site by accident, and I'm stunned why this twist of fate didn't took
place earlier! I bookmarked it.

Feel free to surf to my homepage: dominos uk Vouchers

I have been surfing online more than 2 hours today, yet I never found
any interesting article like yours. It is pretty worth enough for me.
In my opinion, if all webmasters and bloggers made good content as you did, the web will be a lot
more useful than ever before.

Heya i am for the first time here. I found this board and
I find It truly useful & it helped me out much.
I hope to give something back and help others like you aided me.

Excellent weblog here! Additionally your web site loads up
fast! What host are you using? Can I get your affiliate hyperlink for your host?

I desire my website loaded up as quickly as yours lol

Howdy just wanted to give you a quick heads up and let you know a few of the pictures aren't loading properly. I'm
not sure why but I think its a linking issue. I've tried it in two different web browsers and both show the same results.

Its such as you learn my mind! You appear to grasp so
much about this, like you wrote the e book in it
or something. I think that you just could do with some p.

c. to drive the message home a little bit, but instead of that, that is great blog.
An excellent read. I will definitely be back.

Incredible! This blog looks exactly like my old one!
It's on a completely different topic but it has pretty much the same layout and design. Excellent choice of colors!

Howdy! I could have sworn I've visited this website before but after going through many of the posts I realized it's new to me.
Anyways, I'm definitely pleased I found it and I'll be bookmarking it and checking back regularly!

Here is my blog; absolutely freebies

Thanks for your marvelous posting! I actually enjoyed reading it, you can
be a great author.I will make sure to bookmark your blog and will eventually come back
in the foreseeable future. I want to encourage yourself to continue
your great work, have a nice day!

Feel free to visit my blog: insurance For cars

Hi! I could have sworn I've been to this site before but after browsing through some of the post I realized it's new to me.
Anyhow, I'm definitely delighted I found it and I'll be bookmarking and checking back often!

This post actually made my day. You can not imagine just how much time I had spent for this info!
Thanks!

I like the valuable information you provide in your articles.
I'll bookmark your blog and check again here regularly. I am quite sure I will learn a lot of new stuff right here! Good luck for the next!

Good web site you've got here.. It's difficult to find quality writing like yours these days.
I seriously appreciate people like you! Take care!
!

Take a look at my homepage :: Market research companies in london

I was wondering if you ever considered changing the page layout of your site?
Its very well written; I love what youve got to say. But maybe you could a little
more in the way of content so people could connect with it better.

Youve got an awful lot of text for only having
1 or 2 pictures. Maybe you could space it out better?


Here is my weblog ... free stuff for schools uk

I've read some excellent stuff here. Definitely value bookmarking for revisiting. I surprise how much attempt you set to make this sort of fantastic informative site.

It's going to be ending of mine day, but before end I am reading this enormous paragraph to increase my experience.

Feel free to surf to my homepage Dominos Vouchers 2013

I'm amazed, I have to admit. Seldom do I encounter a blog that's equally educative and entertaining, and let me tell you,
you have hit the nail on the head. The problem is something that not enough men
and women are speaking intelligently about. I'm very happy that I stumbled across this in my hunt for something concerning this.

you are really a excellent webmaster. The site loading speed is
amazing. It seems that you are doing any distinctive trick.
In addition, The contents are masterpiece. you have done a great task in
this subject!

Feel free to surf to my blog; care home compliance

I tend not to create a great deal of comments, but i did some searching and wound up here "The Heinkel Cabin Cruiser".
And I actually do have some questions for you if it's allright. Could it be just me or does it give the impression like a few of these responses look like they are left by brain dead folks? :-P And, if you are writing at other places, I would like to follow anything fresh you have to post. Would you make a list of every one of your community pages like your twitter feed, Facebook page or linkedin profile?

This is really interesting, You're a very skilled blogger. I have joined your rss feed and look forward to seeking more of your magnificent post. Also, I've shared your site in my social
networks!

It's difficult to find knowledgeable people in this particular subject, but you seem like you know what you're talking about!
Thanks

I have read so many articles or reviews on the topic of the blogger lovers however this
post is actually a pleasant article, keep it up.

You should take part in a contest for one of
the greatest sites on the web. I am going to recommend
this website!

I have read several just right stuff here. Certainly
price bookmarking for revisiting. I surprise how a lot effort you put to create the sort of fantastic informative web site.

I don't even understand how I finished up right here, but I believed this post was once great. I do not recognize who you're
but definitely you're going to a famous blogger when you are not already. Cheers!

It's fantastic that you are getting ideas from this paragraph as well as from our dialogue made at this time.