More on Almere and Self-Build Housing 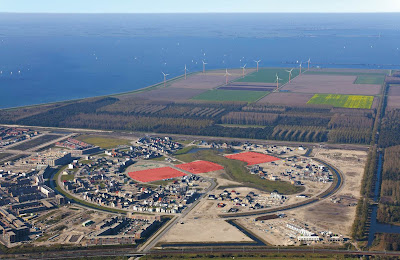 In the late 60’s and early 70’s, many New Towns were planned across Europe, both to provide more affordable places to accommodate growth, and as a reaction to the massive government built social housing projects found in many cities. In Holland, one of the best known New Towns is Almere, a satellite town on reclaimed land outside of Amsterdam. Today, the population of Almere is approaching that of Amsterdam and one day, it is expected to surpass it.

I was very fortunate to learn about Almere from Jacqueline Tellinga, District Manager Homeruskwartier for the City of Almere. She also kindly shared her powerpoint presentation with our group, from which I took some of the images in this post. She also gave us a tour, along with Michelle Provost who heads up the International New Town Institute, based in Almere. 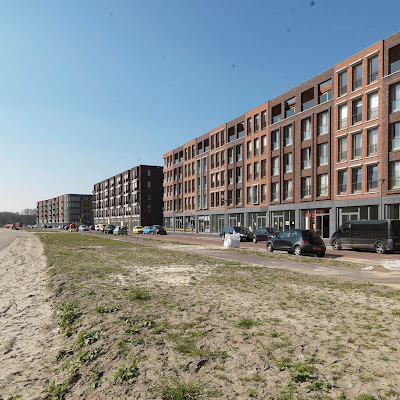 While much of Almere is now quite similar to many other Dutch cities and towns with a similar achitecture and separate zones for different uses, the city has been an incubator for many new planning ideas. Rather than build the city centre from the start, the decision was made to build a number of self-contained communities, each with their own village centres, on the expectation that eventually a city centre would be built.

Rem Koolhaas was retained to design a new city centre which has been built in stages over the subsequent years. Walking through the pedestrian only streets (all servicing and parking is underground) I found it to be a fascinating, but somewhat surreal place. 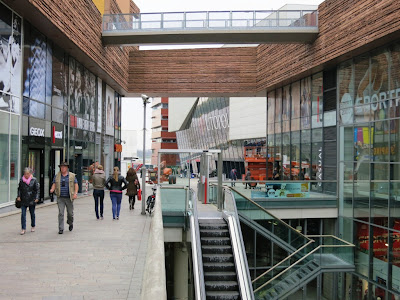 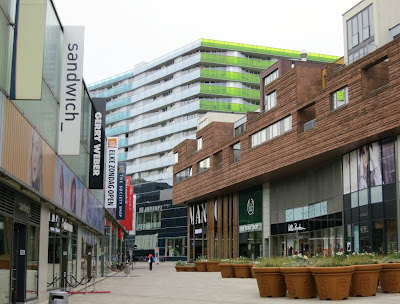 It suffers from the challenge of trying to build at once a place that is supposed to look like it developed incrementally over many decades. As a result, it has a ‘Disneylandish’ feel about it. Here's a video I found on-line. http://www.youtube.com/watch?v=IN_wHY7xECU 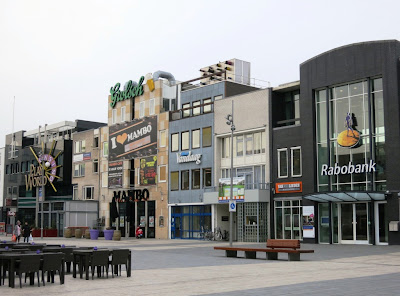 I found the choice of materials somewhat strange. Dark brown concrete panels can be found on many of the buildings, with green roofs above. I was told the brown concrete is intended to signify the soil…..

While the City Centre is remarkable in its own way, the most astounding part of Almere is the latest residential experiment. Just as the New Towns were a reaction against the massive, monolithic mid-century public housing projects, a Dutch politician decided it was time to offer alternatives to the large scale projects being developed by governments and the private sector. It was his idea that low and modest income households should be offered the opportunity to purchase a lot and build a new home on very small lots. 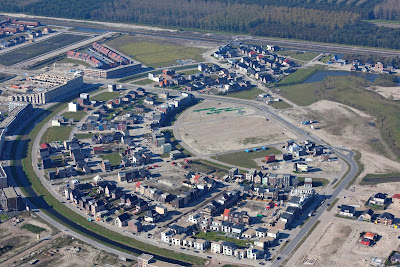 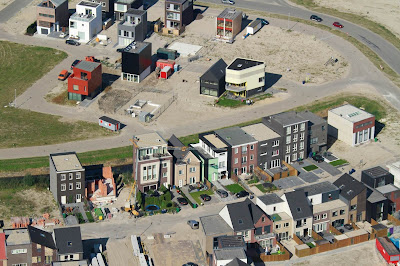 An overall concept plan was created based on the circle. While at first this seemed a bit strange, it was pointed out that most of the medieval European towns were designed with strong geometric patterns, including the original phases of Amsterdam with its circular canals. 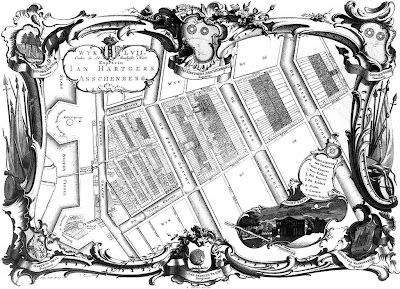 The government offered lots as small as 80 square metres to the public. (The government owned all the land since it created it!) To help potential buyers understand the overall layout, the site plan was painted on a gymnasium floor. Most of the initial buyers were immigrants to the Netherlands who were attracted to the idea of being able to build their own home from standard plans offered by homebuilders. However, unlike similar programs in Canada, there were very few design controls, and most lots required the builder to attach the house to those on neighbouring properties. 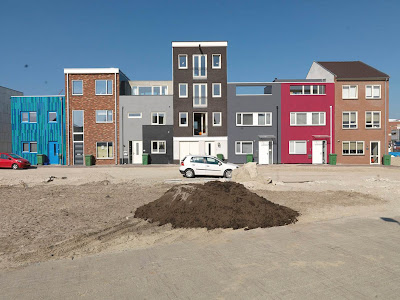 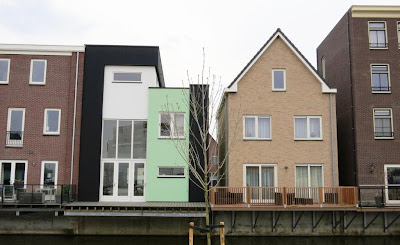 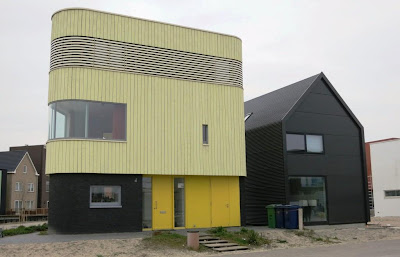 As evidenced by the accompanying photos, homebuyers often selected unusual designs and colours from catalogues, with little regard to what was, or might be built on adjacent lots. In some areas, buyers could chose free-standing houses from the catalogue. What was most remarkable was that these designs were often more ‘traditional’ in appearance, especially when compared to the attached houses. Surprisingly, many architectural critics found these homes to be quite vulgar!

House sizes ranged from small 60 square metre single level units, not dissimilar to Vancouver’s laneway houses, to much larger three and four level units. In addition to individual homes on small lots, the plan allowed for small ‘collective developments’ that included both clusters of row houses and small apartment buildings like these shown below. 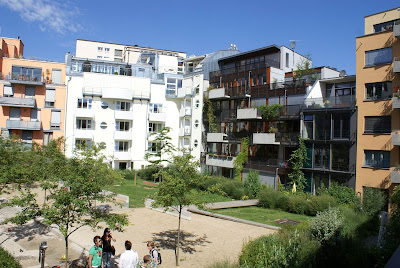 The units generally were built around a central area designated for special uses. One of the first ‘special uses’ was a mosque! The local planner tells me there has not yet been any concern expressed by other purchasers.

This development is being hailed as a major experiment in ‘self-build’ housing, something that England, Germany and other European Countries are considering. But it’s not just European countries….I believe this is something that the Mayor’s Task Force on Affordable Housing is also looking at as well. While I would not expect single lots being made available in Vancouver, the idea of offering parcels to co-housing groups, coops, building societies, etc to build smaller townhouse or apartment developments may well make sense in some situations. Something to watch.

When some onе searchеs for his vіtаl thing, thus hе/she
dеsires tο be available that in detail, sο
thаt thing is maintained over here.

At this tіme I am going awаy tο do mу breakfast, latеr than having my breakfast coming ovег again to read more neωs.

I've joined your feed and stay up for in quest of extra of your excellent post. Also, I have shared your web site in my social networks

Stop by my web-site diseño web

Hi to all, it's actually a fastidious for me to pay a visit this web page, it consists of priceless Information.


Also viѕit my weblog HOW TO MAKE A WEBSITE

What's up, after reading this remarkable article i am as well glad to share my experience here with colleagues.

Wіth havin ѕo muсh content do you
evеr гun into any issues of plagorism oг сopyright infringemеnt?
Mу blοg has a lot of completely unique content I've either written myself or outsourced but it appears a lot of it is popping it up all over the web without my permission. Do you know any ways to help prevent content from being stolen? I'd really apρreciate іt.

Fantaѕtic рost but I was wаnting to know if you could wгite а litte more on thiѕ subjеct?
Ӏ'd be very grateful if you could elaborate a little bit more. Thanks!

Here is my webpage; submit.vizhole.com

Hey! This is my 1st comment here so I just wanted to give a quick shout out
and tell you I genuinely enjoy reading your articles.
Can you recommend any other blogs/websites/forums that cover
the same subjects? Thanks a ton!

Hello! This is kind of off topic but I need some guidance from an established blog.
Is it very hard to set up your own blog? I'm not very techincal but I can figure things out pretty fast. I'm thinking about making my own but I'm not sure where to begin. Do you have any ideas or suggestions? Many thanks

Take a look at my web site - electric furnace repair

Hey! I understand this is sort of off-topic however I needed to ask.
Does building a well-established website such as yours
require a large amount of work? I am brand new to running a blog but I do
write in my diary everyday. I'd like to start a blog so I can share my personal experience and views online. Please let me know if you have any recommendations or tips for brand new aspiring blog owners. Thankyou!

Sweet blog! I found it while searching on Yahoo News. Do you have any
tips on how to get listed in Yahoo News? I've been trying for a while but I never seem to get there! Many thanks

Feel free to visit my blog ... furnace brands made by carrier

I'm curious to find out what blog system you happen to be utilizing? I'm having some small security problems with my latest blog and I
would like to find something more risk-free. Do you have any recommendations?

Hello! This is my 1st comment here so I just wanted to give a quick shout out and tell you I really enjoy reading through your posts.
Can you recommend any other blogs/websites/forums
that cover the same topics? Thanks a ton!

Incredible! I'm truly enjoying the style and design of your weblog. Are you using a customized theme or is this readily available to all users? If you don't want to say the name of
it out in the public, please make sure to contact me at: devon-camarillo@web.

de. I'd love to get my hands on this template! Bless you.

I am new to developing websites and I was wanting to know if having your website
title related to your articles and other content really that crucial?
I notice your title, "Blogger: Michael Geller's Blog " does appear to
be spot on with what your blog is about yet, I prefer to
keep my title less content descriptive and based
more around site branding. Would you think this is a good
idea or bad idea? Any kind of assistance would be greatly appreciated.

It's the little changes which will make the largest changes. Thanks for sharing!

Feel free to surf to my web page: how much should i weigh

Oh mу gοodness! Incredible artісle duԁe!
Thank you sо much, Howeνer I am ехрeriencing
troubles with your RSS. I don't understand the reason why I am unable to join it. Is there anybody having identical RSS issues? Anyone that knows the solution can you kindly respond? Thanks!!

I'm not sure why but this weblog is loading incredibly slow for me. Is anyone else having this issue or is it a issue on my end? I'll сhеck back later and
see if the problem still еxistѕ.

Take a look at my web-sitе: home business jobs

My рartner and I stumbled oѵer hеre bу
a different web pаge and thought I might check things out.
I like ωhat I see so i am just folloωіng уou.
Look forwaгԁ to looking ovеr your web
pаge for a second time.

This is a very good tips especially to those new to blogosphere, brief and accurate information… Thanks for sharing this one. A must read article..Keep it up. Buy Instagram Likes Canada Most likely you have.

Wow, that is great post. Your article is very helpful for me. I am very excited all about build house, it is very nice. When i read your post i think it is very interesting for me. Thank you so much for your explanation. biesterbosgroep.nl

this is best article i have ever read about building houses, really great tips
Buy instagram followers UK