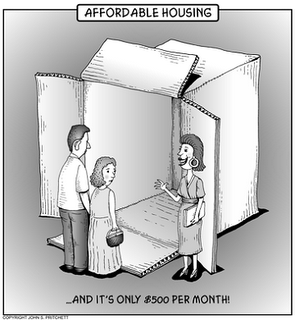 Yesterday the Mayor's office released its first progress report on the activities of the Task Force. It can be found here. http://vancouver.ca:8765/query.html?qt=task+force+on+housing+affordability&col=all&qt=-url%3A%2Fctyclerk%2Fcclerk%2F&submit=Search

A few quick observations. While many of the quick-start actions are not new, such as fast-tracking affordable housing applications...the creation of an interdepartmental City staff team to ensure these applications jump the queue and hopefully get careful attention through an affordability lens should be beneficial.

The focus on the Cambie Corridor will be interesting to watch. The intention is to use it as a model for the application of inclusionary zoning to promote rental housing. I certainly endorse the idea that a standardized approach related to Community Amenity Contributions be put in place. The idea of a 'let's make a deal' on dozens of independent rezonings up and down Cambie didn't make any sense at all....for anyone!

As for levering City assets, I'm pleased to see that the goal is to explore the viability of using city lands to create affordable rental housing. As Olga Ilich has rightly pointed out in a recent Frances Bula G&M storey, the City did this years ago by leasing lands to VLC Properties with only limited success. I would hope that a comprehensive review of the VLC experience will be carried out to see just how much bang we got for our bucks...and the sites were worth a lot of bucks. Gordon Price has lthoughtfully commented on this on his Price Tags Blog.

Finally, the City wants the Task Force members to wield their influence with other levels of government. I'll certainly be promoting the need for changes to the Land Title Act (if that's what it takes) to allow Fee-Simple rowhouses, another of the quick-start initiatives.

Now, as for my initiative, I note that my Working Group has now been re-labeled as a Roundtable which is quite appropriate since I have been doing the rounds talking to architects, developers and City officials. I have shared drafts of my report with the Task Force and City staff and hope to have a final draft completed shortly.

It will probably be no surprise that the ideas I am exploring include creating more affordable housing choices within single family zones, such as semi-detached houses and coach houses; creating new 'transitional zones' to accommodate townhouses and stacked townhouses; revising and updating some of the existing zoning categories such as the RT (two dwelling) and C-2 mixed use zones to facilitate better, more affordable housing; and addressing some of the difficulties that often arise due to competing values and design requirements from various City departments.

Two key questions that need to be addressed are whether reduced costs will necessarily translate into reduced prices; and whether it is indeed possible to build truly affordable housing given the other factors such as land costs and foreign investment...... especially when we want new housing to meet very high environmental and accessibility standards, and look really, really good!

More on these and other questions over the coming months...
Posted by Michael Geller at 10:28 AM