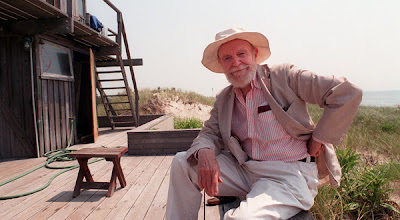 I was shocked this week to receive a Google Alert for Michael Geller architect announcing my death!

In fact, this time it wasn't me, but an American architect named Andrew Michael Geller did pass away at the age of 87. Although I once wrote to him, sadly he didn't write back. However, retired Vancouver architect Herb Auerbach once worked with him and thoughtfully passed on a link to an extensive New York Times obituary.

I wrote to him because we had a few things in common, other than our name. Both of our forefathers came from Odessa (indeed, most Gellers who I have met have roots in Odessa). But more significantly, we both had a longstanding fascination with affordable prefabricated housing.

In my case, on-the-ground projects are limited to two CMHC seniors' housing developments made with factory produced modules. However, readers of this blog are familiar with my ongoing desire to create factory produced laneway cottages and housing for the homeless, based somewhat on my 1971 Architectural Thesis.

Andrew Geller, on the other hand, had many of his projects, especially prefabricated cottages built, including a model that was set up on the 9th Floor of Macy's in New York. From the excerpts below, readers may also detect a couple of other similarities in our personalities and attitudes towards the establishment!

Andrew Geller, an architect who embodied postwar ingenuity and optimism in a series of inexpensive beach houses in whimsical shapes and who helped bring modernism to the masses with prefabricated cottages sold at Macy’s, died on Sunday in Syracuse. He was 87 and lived in Spencer, N.Y.

Mr. Geller designed the “typical American house” shown at the American National Exhibition in Moscow in 1959. The model shown in Moscow led to a line of vacation houses, sold in the 1960s under the name Leisurama. One of the houses, complete with picture window and carport, was displayed on the ninth floor of Macy’s in Herald Square; people came in to buy house-wares and walked out owning houses. (A basic model required a down payment of $490, followed by monthly payments of $73.) Some 200 Leisurama houses were built.

“Geller posed something of a threat to the status quo. He was incredibly prolific, experimental, friendly, never took himself too seriously, could be irreverent, and even had dared to live a normal family life in suburban Long Island. He was successful in his own right, well outside the inner sanctum of the design world. He wasn’t practiced in the priestly double-speak of the architectural establishment. He didn’t care. He had the nerve to be playful, make jokes, have fun, be funny, breezy, light, even joyful. He’d made up his own rules and didn’t care much what the mainstream thought of him. “

“Geller could be an irritant, a speck of sand in the establishment’s eye. They were hoping he would just fly away, disappear somehow, but he didn’t. His freshness and originality kept popping up again and again, being “rediscovered,” until he was able to claim his own level of notoriety and acclaim.”

Posted by michael geller at 9:28 AM

glad you are still with us.

Fantastic site. Plenty of useful info here. I'm sending it to a few pals ans additionally sharing in delicious. And certainly, thank you on your effort!
My webpage - rent apartments in santa monica

Your web site seems to be having some compatibilty issues in my chrome
browser. The text appears to be running off the page pretty bad.
If you would like you can email me at: keenanclapp@gmail.

com and I'll shoot you over a screen grab of the problem.

Hello! It appears as though we both have a passion
for the same thing. Your blog, "Blogger: Michael Geller's Blog" and mine are very similar.
Have you ever considered authoring a guest article for a similar
website? It will unquestionably help gain exposure to your blog (my
site recieves a lot of targeted traffic). If you're interested, e-mail me at: alicealmond@gmail.com. Thank you

Today, I went to the beachfront with my kids. I found a sea shell and gave
it to my 4 year old daughter and said "You can hear the ocean if you put this to your ear." She placed the shell to her ear and screamed.
There was a hermit crab inside and it pinched her ear.
She never wants to go back! LoL I know this is totally
off topic but I had to tell someone!

Hey there excellent website! Does running a blog such as this require a
massive amount work? I have very little expertise in coding however I had been hoping to
start my own blog soon. Anyway, should you have any suggestions or techniques for new
blog owners please share. I understand this is off topic however I simply
had to ask. Thanks!

Incredible! I'm genuinely enjoying the design of your weblog. Are you using a custom template or is this readily available to all individuals? If you really don't want to say the
name of it out in the general public, please
email me at: randell.fontaine@aol.com. I'd really like to get my hands on this theme! Thanks a lot.

Hey there! This is kind of off topic but I need some guidance from an established blog.
Is it hard to set up your own blog? I'm not very techincal but I can figure things out pretty fast. I'm thinking about setting up my own but
I'm not sure where to begin. Do you have any ideas or suggestions? Cheers

I don't know whether it's just me or if everyone else experiencing problems with
your site. It seems like some of the written text
in your posts are running off the screen. Can someone else please provide feedback and let me know if this is happening to them too?
This may be a issue with my web browser because I've had this happen previously. Kudos

I've gone ahead and added a backlink back to your site from one of my clients requesting it. I have used your site URL: http://www.blogger.com/comment.g?blogID=4088226422072866788&postID=3022202200708168884 and blog title: Blogger: Michael Geller's Blog to
guarantee you get the proper anchor text. If you woud like to check out where your website
link has been placed, please contact me at: dominique-bankston@web.

Howdy would you mind stating which blog platform you're working with? I'm planning to start
my own blog in the near future but I'm having a tough time selecting between BlogEngine/Wordpress/B2evolution and Drupal. The reason I ask is because your layout seems different then most blogs and I'm looking for something completely unique.
P.S Sorry for being off-topic but I had to ask!

Stop by my web-site - profesionalna

At this time it looks like Wordpress is the best blogging platform out there right now.

(from what I've read) Is that what you are using on your blog?

I'm starting a internet blog directory and was wanting to know if I can submit your site? I'm hoping to increase my directory slowly by hand so that it retains good quality.
I'll make sure and put your website in the appropriate category and I'll
additionally use, "Blogger: Michael Geller's Blog" as your
anchor text. Make sure you let me know if this is ok with you by e-mailing me at: sang.
pickens@gmx.net. Appreciate it

Its not my first time to pay a visit this site, i am visiting this
web page dailly and get pleasant information from here everyday.

I've been wanting to develop my own website for a while now but have been turned off because I've always assumed it
demanded tons of work. What do you think? Thanks alot :)

Feel free to surf to my webpage - albino

I'm curious to find out what blog platform you happen to be using? I'm having
some small security issues with my latest blog and I would like to find something more secure.
Do you have any solutions?