I didn’t really know what to expect.

is not one of the world’s most photographed cities. Indeed, I had only seen one shot in a tourist brochure, before we arrived. What we found was a lively mixture of old world markets and crowded shops, combined with a few new mid-rise office buildings, with aluminum cladding that could have been in Hong Kong or .

Our taxi driver pointed out the KFC outlet and McDonalds, assuming that they would be important to us. What was of interest was the relatively new 6 cinema complex which was showing Borat and other films now playing on .

We visited the local market where we were intrigued to find fruits and vegetables that we had never before seen in our life. Sally wanted a lime for her early morning beverage. (No Jim, it’s not a gin and tonic!) They were ten for a dollar. But she only wanted one. It took a lot of effort to finally convince a merchant to sell us one for 20 cents! 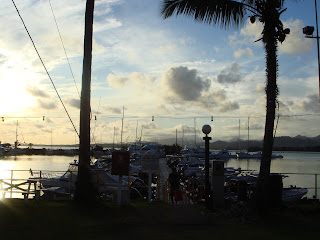 Sandra, the daughter of one of Sally’s friends, picked us up at our hotel, and took us to the Royal Suva Yacht Club, for a harbour tour in their boat before dinner. It was a beautiful evening, and while the city’s skyline does not rival Vancouver or Sydney, it was very beautiful to see the sun setting on the horizon. The layers of distant islands and mountains reminded us of a Tony Onley painting.

Masi, her architect husband and I talked about bamboo. He’s involved with Habitat for Humanity, and most interested in building affordable housing. He recently tried to get into to take a month long course on cultivating bamboo, because he sees it as a very affordable flooring product. Unfortunately, as a Fijian he couldn’t get the necessary papers to attend the course. I told him how bamboo flooring is becoming popular in , as a stylish ‘sustainable’ product. I also mentioned that Habitat for Humanity has been doing a project in , but it is costing more than the $17,000 a house that is his current cost in . 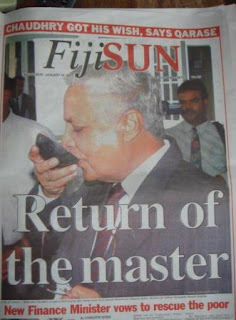 Now, as for the coup, for me it’s a bit like global warming. Let me explain. Just when I think I understand what’s happening with global warming, I hear another opinion that forces me to reconsider my views. It’s the same with the coup. From everything I had been reading in the paper, I was beginning to think 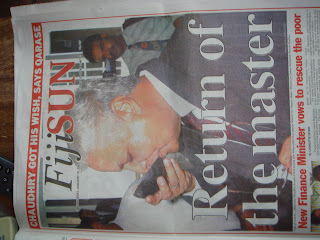 the coup was perhaps a good thing. It was replacing corrupt political leaders with representatives of both political parties, who were genuinely concerned with helping the poor. The military had even appointed new Ministers who knew something about their portfolios. (I mean, how often does that happen in .) But after talking to Sandra, I realized that I was all wrong.

Instead, what she told me is that this is a cruel military regime, with little concern for human rights, which has ousted a democratically elected government. Furthermore, this is one in a series of racially motivated events that are not likely to stop in the near future. (Sally doesn’t want me to say much more, in case someone from the government reads our blog!)

It’s sad, because is such a beautiful country, with otherwise very lovely people. To all our friends and acquaintances, notwithstanding the political climate, you really should consider coming here for a visit. The beaches are as nice as those of the . The snorkeling is excellent. The scenery, both along the coast, and in the jungle, is magnificent. You can drink the tap water. While it is not inexpensive, it is better value than or . And perhaps most importantly, you can legally buy powdered kava to make your own hallucinogenic beverages!

Posted by michael geller at 6:26 PM